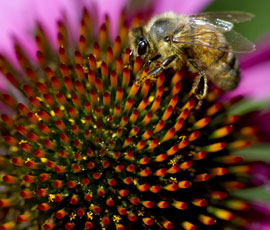 The French government plans to ban a pesticide linked to the decline of bees that is widely used to treat oilseed rape.

Cruiser OSR, which contains the neonicotinoid insecticide thiamethoxam, is scheduled to be withdrawn from use on oilseed rape in France by the French Ministry of Agriculture.

Made by the Swiss agrichemical company Syngenta, Cruiser OSR is a seed treatment, which is coated onto the rape seeds.

The plan to ban Cruiser follows two studies earlier this year, in the UK and France, which found evidence that neonicotinoids contain chemicals that disorientate bees and prevent them from finding their way back to hives, causing colony collapse disorder.

France’s Ministry of Agriculture said it would also be pushing for a European-wide ban with the European Commission and the European Food Safety Agency (EFSA).

Bees are vitally important to agriculture for pollinating our food crops and maintaining biodiversity in the rural environment.

However, bee numbers have been declining worldwide in recent years and conservationists claim that pesticides are a contributing factor, in particular neonicotinoids.

Syngenta has less than two weeks to submit its own evidence before any ban in France could be implemented. The company said called the announcement a “dark day for French and European agriculture”.

In its defence, Syngenta claimed no cases of bee mortality have been identified as being linked to Cruiser OSR – although 650,000ha of treated seeds are grown in France.

DEFRA said it was investigating the reports before deciding whether to act in line with its pesticide safety policy.

“We are assessing recent studies on neonicotinoids and will report our findings very shortly,” a spokesman said.

“The UK has a robust system for testing and reviewing pesticide use and if the evidence shows the need for action, we will not hesitate to act.”

Cruiser is available to use in the UK as a broad spectrum seed treatment, providing fungicidal and insecticidal use on oilseed rape, fodder rape and mustard.