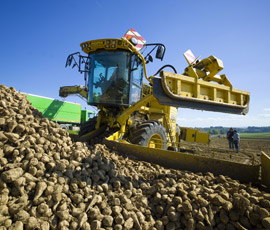 Full findings from a five-month investigation into emergence problems with this year’s sugar beet crops must not be delayed, a leading seed breeder has said.

It follows a British Beet Research Organisation (BBRO) bulletin which said cold weather had a “significant role” in triggering problems with sugar beet emergence this spring.

Sugar beet breeder SES VanderHave said it welcomed the bulletin. But the company has taken issue with some findings and called for a full report and publication of all related data.

The BBRO bulletin was published on Friday (4 October). A full summary is expected to be presented at the BBRO Winter Conference, due to take place on 5 February 2014.

SES VanderHave general manager Ian Munnery said the bulletin made some “important observations” about the emergence and rooting problems faced by growers.

But it was important that the full report was released quickly, he added.

“Before drawing any conclusions we must await the full report and data. We would urge this is provided swiftly so any lessons can be implemented in good time.”

Nonetheless, Mr Munnery said it was important to note that BBRO had confirmed there were emergence issues with crops drilled in late April and May – outside of the cold spring.

Mr Munnery said the BBRO had commented previously that at least 10 varieties, from all breeders had been affected to a greater or lesser extent by emergence problems.

But the bulletin focuses on only three varieties – Cayman (from SES VanderHave), Pasteur (from Strube) and SY Muse (from Syngenta).

In total, SES VanderHave has eight sugar beet varieties on the current BBRO recommended list – more than any of its competitors.

The bulletin confirmed there were no issues with the BBRO variety trials, said Mr Munnery.

“However SES VanderHave do not recognise the BBRO claim that globally there are similarly affected plant stands and rooting issues,” he added.

“We see neither the same symptoms nor severity outside of the UK.”

Growers reported problems with sugar beet varieties from all the leading sugar beet breeders on the BBRO Recommended List this season – prompting questions over seed processing.

All sugar beet seed grown by UK farmers and destined for British Sugar is pelleted and primed by Germains – a British Sugar subsidiary based at King’s Lynn.

Germains introduced a new Xbeet Plus technology for the 2013 crop, saying it would improve the speed of emergence and uniformity of crops, ultimately delivering higher yields.

The BBRO bulletin said poor germination was caused by a number of interacting factors – rather than any single cause – but cold weather had a big part to play.

Since the bulletin was published, British Sugar and the NFU have agreed that growers can choose whether they use Xbeet Plus with certain varieties for 2014.

As a result sugar beet varieties Haydn, Stingray, Cayman, Springbok, SY Muse and Mongoose will be available in both the Xbeet and Xbeet Plus formats for the 2014 season.

Growers who wish to change their entire seed order to Xbeet are asked to do so online. Growers wanting to change only part of their order are asked to call a British Sugar helpdesk.

Seed not specifically ordered as Xbeet will be supplied as Xbeet Plus, the email says. All seed orders and any requests for Xbeet should be completed by 18 October.

Mr Munnery said he welcomed the BBRO suggestion that all pelleting technologies be robustly and independently tested in future – something SES VanderHave already did with its own varieties.

The BBRO recommendation of a priming and pelleting trial in 2014 was also to be welcomed, he said. It would allow performance to be fully evaluated and provide the widest choice for growers.

SES VanderHave would also be stepping up its own field trials and laboratory tests on seeds processed by third parties to protect our its own varieties and reputation in the future.