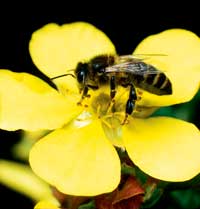 The fall in bee populations could cost UK agriculture £440m a year unless steps are taken to reverse the decline, scientists have claimed.

Amounting to about 13% of the country’s income from farming, the warning came as funding worth up to £10m was announced to look at reasons why populations of pollinating insects have fallen in recent years.

The Insect Pollinators Initiative will look at reasons behind the decline in bee numbers, as well as ways to bolster the numbers of insects which pollinate crops.

Jointly funded by the Biotechnology and Biological Sciences Research Council, DEFRA, the Natural Environment Research Council, the Scottish Government and the Wellcome Trust, the initiative will bring together experts from UK universities and research bodies.

Andrew Watkinson, director of the Living with Environmental Change programme, said there was no one factor causing the decline.

“The causes of pollinator declines are likely to be complex and involve interactions between pollinators, the environment and the pests and diseases that affect these insects,” Professor Watkinson said.

“Insects pollinate around a third of the agricultural crops grown globally and the total loss of insect pollinators could cost up to £440m a year in the UK.

“Because of the vital role pollinating insects play, it is absolutely crucial that we generate knowledge that can be applied to strategies aimed at reversing the decline.

“It is imperative that the science that’s being done is fed through as quickly as possible to the conservationists and to the agricultural community, so that we can ensure food security and also the maintenance of our biodiversity,” he said.

“It is crucial we all work together on this and the biggest challenge will be to better understand the complex relationships between biological and environmental factors that affect pollinators’ health and lifespan.”

Some of the bee research projects:

• Fitting radio frequency ID tags to pollinators to research pesticides’ effects on bees. Researchers think a ‘cocktail of pesticides’ might be damaging bee’s brain activity, affecting their ability to gather food. Findings will advise farmers on which combination of chemicals should be avoided.

• Researching the impact of the Varroa destructor mite

• Looking into the effects of agriculture on bees.