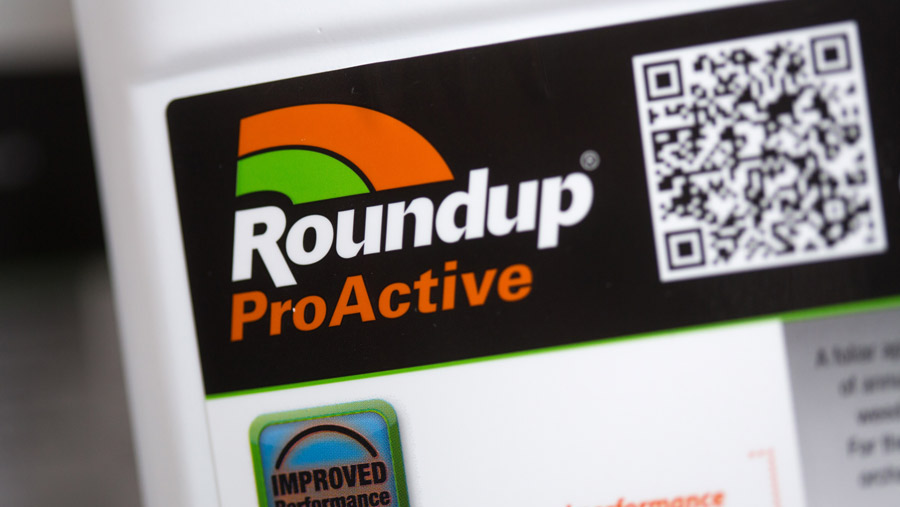 Bayer CropScience has warned that a key ingredient used in its glyphosate herbicides has suffered a “mechanical failure”, which could result in a shortage of production in the coming months.

The German agrochemical giant said one of its key raw material suppliers had experienced a mechanical failure in its manufacturing plant “which leads to a substantial reduction in production rates”.

“As of now, given the supplier notification, we expect repairs to this production line to take around three months,” wrote Dr Udo Schneider, Bayer’s global head of active ingredient manufacturing, in a letter to customers on Friday 11 February.

Dr Schneider said the situation constituted a “force majeure event for Bayer”, because the company’s ability to supply glyphosate or glyphosate-containing products “as agreed upon in certain agreements or under accepted purchase orders has been impacted”.

He apologised for the impact but said it was “beyond our reasonable control”.

Dr Schneider said the company would be working with the key supplier and other partners of trust to ensure the impact is as minimal as possible.

Bayer, which manufactures the glyphosate-containing weedkiller Roundup, has not revealed the identity of the key supplier of the raw material ingredient that has been affected.

Last autumn, growers were urged to review their glyphosate supplies amid warnings of a possible global shortage of the world’s most widely used herbicide.

At that time, a shortage in the production of glyphosate was blamed on a number of factors, including transport and logistics problems, and glyphosate producers in China suspending their production during the Covid-19 pandemic.

“We’re very concerned about the price rises of all crop inputs, especially fertiliser, and glyphosate is one that has risen sharply,” he added.

“Growers were struggling to source glyphosate in the autumn. The price has gone up nearly three-fold on this time last year.

“Any prices rises on glyphosate are going to have a huge impact on growers, especially those running min- or no-till farming systems to reduce tillage and ploughing and make carbon reductions as part of industry efforts to reach net zero.”

AF, the UK’s largest agricultural buying group, formerly known as Anglia Farmers, told Farmers Weekly it had been monitoring the issues surrounding glyphosate supply for several months, including this social media story that has emerged relating to Bayer.

A spokesperson for the AF Crop Inputs team said: “There is potential for continued price volatility, combined with supply issues, to create a challenge for those still needing to order their glyphosate requirements.

“We are working with our members and Bayer to manage the ongoing situation.”

A Bayer spokesman said: “The crop chemistry market worldwide is experiencing historically tight supply due to challenging global trade flows, effects of the global pandemic and other forces which have continued to put pressure on already tight supplies.

“Throughout these situations, Bayer has been working with its customers to help manage supplies and best meet their needs around the world.

“Recently a supplier of a raw ingredient needed to produce glyphosate suffered a mechanical failure which may have some short-term impacts on our production of the active ingredient used to manufacture glyphosate-based herbicides.

“Our supplier is on track to restore production, we’ve sourced additional materials and made other mitigation efforts to help best manage this situation.”

However, Bayer expects the impact on its annual glyphosate production will be “minimal”, the spokesman added.

“The Roundup branded agriculture herbicide business supply will continue to be managed through the already ongoing supply management efforts,” he continued.

“In addition, we are monitoring the seasonal demands of glyphosate and will work to balance supply within our commercial regions, so farmers will continue to have access to our Roundup products as much as possible. We will continue to work diligently with our customers to address their needs and help them have a successful season.”

An agronomist’s perspective on tight supplies of glyphosate

Sean Sparling, chairman of the Association of Independent Crop Consultants and an independent agronomist based in Lincolnshire, said UK growers had been struggling with shortages of glyphosate and seeing the increasing need to manage other key agrochemicals more carefully since last April.

“Months before Christmas, we were having to order glyphosate because it was almost to the point of being non-existent, with the price seemingly going up every time the name was mentioned,” he said.

“Apparently as a result of a manufacturing issue then too, we thought it would resolve its own supply situation come spring, but that looks like it may not now be the case.

“It’s not just glyphosate though – the whole industry is complicated at the moment with product supply in general. Whether that’s a result of cynicism, Brexit or coincidence I don’t know – but I don’t believe in coincidences.”

Mr Sparling said this time last year growers were paying between £45 and £50 for a 20-litre can of 360g/l glyphosate. But the price has risen to £150 for that same can, he added, “which now looks like a good deal”.

“I’m not sure all of it is down to supply issues,” said Mr Sparling. “Some of it is down to opportunism and exploiting the sector – high grain prices for growers and the law of supply and demand for all things, including seed and fertilisers.

“The fact is that if people need a product, suppliers know they will be prepared to pay whatever. There’s really not a lot we can do about it. It’s a supplier’s market and this is a global problem.”

Mr Sparling said that besides Bayer, there were of course other companies that manufacture glyphosate, but that they too had faced similar supply issues and for similar manufacturing reasons.

“I also think we have become very reliant upon using glyphosate too widely over the past 10 years – changing to farming systems like min- and no-till and with few alternatives. If this concentrates people’s minds to look at managing glyphosate more carefully as the vital tool it clearly is, then maybe it’s not such a bad thing.”