Striking the right balance between crop safety and product efficacy is the key to getting the best results from the grassweed herbicide clethodim in oilseed rape crops this autumn.

Both resistance management measures and strict application procedures must be observed as Centurion Max enters its fourth year of commercial use, having impressed growers with high levels of control to date. 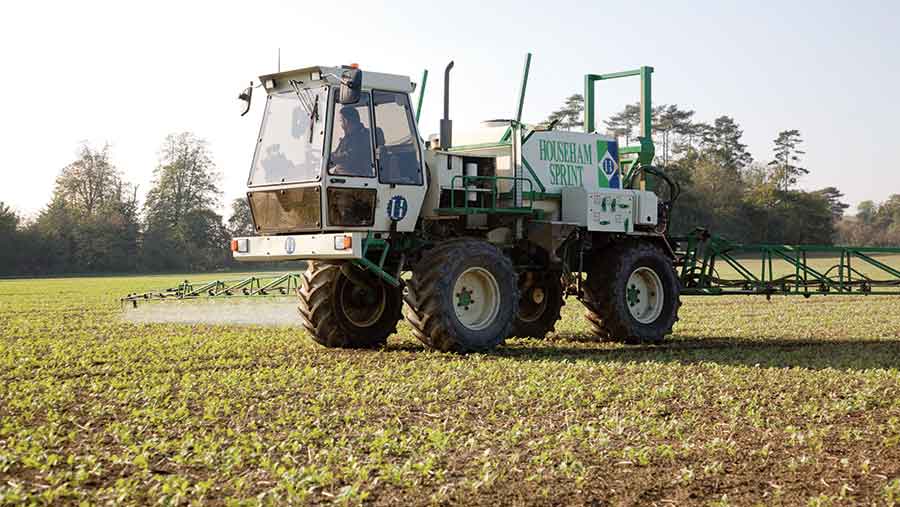 Despite being a member of the “dim” family and an ACCase inhibiting herbicide – a group that is usually affected by resistance – Centurion Max works better than most other graminicides from the same group against blackgrass with target-site resistance.

That makes it a useful extra member of the armoury, and one that growers should make every effort to keep working well, advise crop experts.

As independent consultant Stephen Moss, formerly of Rothamsted Research explains, clethodim is still giving good control where target-site resistance has been confirmed – which is different to the results from products based on the alternatives, tepraloxydim and cycloxydim.

“For reasons that are only partially understood, Centurion Max is less affected by herbicide resistance than other ACCase inhibitors,” he says.

“The most common resistance mechanism found in the UK only gives partial resistance to the active ingredient.

“In fact, just two of the known 11 resistance mechanisms confer high resistance to it.”

However, other mechanisms could build up in weed populations, as they have in Australia, which is why it is so important that it is used in the correct way and according to the product guidelines, he cautions.

“It is only used in the broad-leaved crops oilseed rape and sugar beet, which tend to be grown in wider rotations with gaps of a few years between them, so there is potential to keep it going and preserve it for these situations.”

Having said that, clethodim is not a complete solution on its own, stresses Dr Moss.

“As with other blackgrass scenarios, it is important that it is used in sequences with other chemistry and as part of an integrated programme.”

The Centurion Max guidelines are unchanged for the coming season, advises Don Pendergrast, technical manager with Arysta LifeScience, who believes that growers have developed an understanding of how to use the product.

“Some of the early reports of crop damage when the product was first launched were a result of poor application timing or inappropriate tank mixing and sequencing,” he reports.

As a result, the guidance is clear. Centurion Max should be applied at a rate of 1 litre/ha in a minimum of 200 litres/ha of water, and it can only be tank mixed with an insecticide for cabbage stem flea beetle control.

“Using a water conditioner is fine in high pH areas, but otherwise no other product, including adjuvants, should be tank-mixed with the product.”

Centurion Max can be applied from the two true leaves stage of the oilseed rape crop, up until the end of October, he continues.

“It mustn’t be applied after this date, and if you are growing early flowering or maturing varieties, then it is best to avoid applications after mid-October.”

The same applies to crops drilled before 25 August, he adds.

Mr Pendergrast also highlights the sequencing restrictions. “There should be no other chemical applications made either 14 days before or 14 days after a Centurion Max application.”

In addition, it should only be applied to actively growing weeds when the average temperature is above 7C. “Don’t attempt to use it in cold conditions and ensure that the crop is free of stress and pest damage.”

In terms of resistance management, clethodim should always be used in sequence with other non-ACCase herbicides which have grassweed activity.

“So it has an obvious place after the pre-emergence residual treatment has been applied, but before the post-emergence propyzamide/carbetamide application.

“And of course, everything should be done to maximise cultural and out of crop control of grassweeds,” he says.

Centurion Max works well on other grassweeds as well as blackgrass, providing they are small at the time of application, confirms ProCam’s Tudor Dawkins.

“Don’t let them get too big and whatever the weed target, it must be growing actively for uptake,” he says. “Early use is preferred, as that is when the weed is at its most sensitive.”

Blackgrass is now so ubiquitous that any control must be optimised, he continues.

“That’s why the guidelines are so important. Centurion Max is a unique opportunity to still get good results from a ‘dim’, so we need to hang on to it for as long as possible.”

The product has to be included as part of a programme, he stresses. “It’s not a standalone solution.”