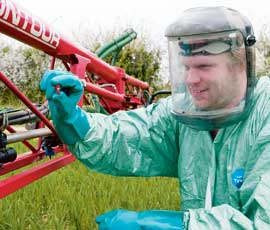 Nozzles that project their sprays at an angle rather than vertically feature prominently in the selection used by an award-winning sprayer operator. Peter Hill reports

Flushed with the success of lifting last year’s Syngenta Farm Sprayer Operator of the Year (FSOOTY) award, operator Rob Cannell has embarked on a new venture as a self-employed spraying contractor.

Operating from his father’s farm at Bungay in east Suffolk, he hopes to build a workload through personal contacts and an association with independent agronomy business Agrivice. It’s a big step out of the comfort zone for Mr Cannell, who worked for a large farming company in the area when he won the coveted FSOOTY title last year, tackling an annual spraying workload of about 10,000ha.

Buying the Bateman RB15 self-propelled sprayer that he operated for a previous employer has provided the means to do contract spraying, supported by a home-built water bowser when working too far from a mains supply for time-efficient returns for refills.

But among the most important items of equipment he will use is the selection of nozzles that provide the final link in the crop protection advice and application chain.

“As with all spraying jobs, the most appropriate nozzle to use is the one that comes closest to meeting your objective in terms of getting the spray on to the target at the optimum time,” says Mr Cannell. “Unless conditions are absolutely ideal – and they rarely are – it’s then a matter of choosing a droplet size or spray quality that balances efficacy and drift control.”

Having seen plenty of evidence to support the notion of applying sprays at an angle rather than vertically, his selection includes mostly nozzles with this feature.

“I’ve always got a set of Hypro 025 conventional fan jets with me for times when they will do the best job, but for most operations I’m using angled jets, either conventional or air induction, to get the best coverage,” he explains. “And depending on the crop and circumstances, they may all face the same way or alternately forwards and backwards.”

Of all the spraying jobs carried out through the year, he believes tackling blackgrass is the one where the choice of nozzle, forward speed and water volume has the biggest effect on the results achieved.

“You need a little movement to hit the thin, vertical targets that blackgrass presents but no drift off target or you’re not going to put on the correct dose,” says Rob Cannell.

If conditions are perfect, Syngenta’s flat fan “Potato” variable pressure nozzle is his preferred choice to achieve the required volume and spray quality. It projects its 110-degree spray 30 degrees from vertical and the nozzle is installed alternatively facing forward and back to ensure thorough target coverage.

“It produces a finer spray and so potentially is quite drifty,” says Mr Cannell. “I’ve done some water-sensitive paper tests comparing it with the Defy nozzle, and although that was pretty good, I liked what this nozzle could do.”

When conditions are less than perfect, the Defy nozzle comes into its own by producing a less drift-prone spray.

Introduced a year ago last autumn by Syngenta, this nozzle was chiefly developed for pre-emergence herbicide applications, says the company’s application specialist Tom Robinson. But it can also be used to good effect with post-emergence treatments, he confirms.

The nozzle produces a flat fan spray pattern inclined by 40 degrees from the vertical, and Mr Robinson’s advice is to alternate them forward and back having seen this arrangement improving pre-emergence blackgrass control from 50-75% compared with vertical sprays in trials, with more even spray coverage each side of soil clods.

It has also been engineered to cope with the trend towards faster spraying speeds and inability of some sprayers to get booms low enough for pre-emergence treatments.

“For a start, the Defy nozzle produces a narrower fan angle of 83 degrees,” Mr Robinson points out. “It gives best results at 50cm boom height but the narrow angle means it can also be used at 70cm if the boom can’t get down that far.”

“There are occasions when getting the spray on as close as possible to optimum timing doesn’t coincide with good spraying conditions,” he points out. “The air inclusion nozzle’s greater drift control performance means you can at least get the herbicide on in those situations, even if it’s not ideal from an efficacy standpoint.”

The same set-up has been evaluated for fungicide sprays using a patternator built as part of Mr Cannell’s BASIS project.

“It was not an accurate scientific test by any means but the impression was that the spray suffered more from turbulence as speed increased than with the more compact fitment you get with a purpose-made angled tip,” he says.

The nozzle he uses most, therefore, is Syngenta’s Amistar, in original 025 size for most of the field when conditions are favourable for the relatively fine spray it produces for an air inclusion nozzle. The larger Go-faster 035 size comes into play for its slightly coarser output when more robust drift control is needed in less favourable conditions and when working on headlands or close to houses.

With two spray lines on the Bateman’s 24m Contour boom, switching between the two – as well as other nozzle combinations – takes no time at all.

Using quality spray tips such as Syngenta’s, which are backed by proven expertise in spray application technology and field trials, makes sense when applying crop protection materials that represent a big investment in crop yield and quality.

To emphasise the point, Mr Cannell recalls jug testing the conventional flat fan nozzles that a friend had in his sprayer.

“We recorded as much as +8% or -8% difference in flow rate from nozzles of the same size,” he recalls. “The message is: Don’t buy unknown spray nozzles off of eBay”