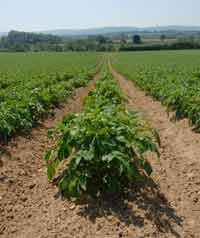 A genetically modified potato trial, replanted a year after it was trashed by environmentalists, has once again become embroiled in controversy.

Anti-GM campaigners claimed DEFRA allowed the University of Leeds to replant the nematode-resistant potatoes without first notifying the public.

Clare Oxborrow, food campaigner at Friends of the Earth, told a national newspaper that DEFRA was “trying to slip it under the radar”.

“DEFRA clearly does not want people to know it is going on this year. This worries us because farmers, gardeners and people living nearby should know about it because of the risk of contaminating other plants with an untested GM product,” she told The Daily Telegraph.

She also claimed that an antibiotic-resistant gene used in the potato could have potential health implications if it escaped.

But DEFRA insisted it had followed protocol and the trial was safe.

“The university was granted a three-year consent to conduct a research trial on GM potatoes in May 2008, after the application was considered by the independent Advisory Committee on Releases to the Environment.

“The committee confirmed that the trial would not compromise human health or the environment.

“The potatoes in the trial will not be used for food or animal feed, and the consent contains conditions to ensure GM material does not persist at the site after the trial,” the spokeswoman said.

A university official insisted the trial could help boost the industry and feed people.

“While we are aware of the public interest in this issue, it is vital that any debate is based on scientific fact rather than speculation and our academics have an important contribution to make in this respect,” he said.

The university is taking no chances with this year’s trial – security guards and CCTV will keep watch over the 400 potato plants which have been surrounded by fencing.