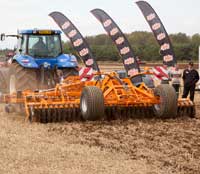 Farmers looking to lower the cost of tillage should be working shallower, wider and faster, according to professor of agricultural engineering Dick Godwin.

He was speaking at a seminar at the first Bath and West machinery show at Shepton Mallet last week.

Farmers shouldn’t forget compaction management, either, he adds. “The aim of any tillage is to achieve the desired soil condition with the minimum amount of energy, time and investment,” he explained.

“Machinery needs to be able to allow operators to work the land as soon after rain as possible, create a soil structure which is strong enough to support any machinery that follows, create a good enough tilth for accurate seed placement and be smooth enough to allow wide working widths.”

According to a DEFRA survey carried out last year, only 14% of farmers sre using minimum tillage to establish crops, representing about 19% of the total acreage of crops grown.

“The best tool in your toolbox with min-till is patience,” he says. “It’s difficult, but the conditions have to be ideal, else there’s little point in sowing the crop into a compacted or smeared seedbed.”

There are constraints to direct drilling and min-till in the UK, however. “Soils like clays and sand can both pose problems, and our wheat yields of 10t/ha produce an awful lot of straw.

“That’s fine in Illinois, where they have winters that freeze the straw before following crops are drilled in spring but, in our autumn drilling systems, trash is a problem. Weed burden also has to be considered and ,with pesticide rules getting tougher, mechanical weed control is going to become more prevalent,” added Prof Godwin.

“Min-till works best if you have good compaction management,” he explained. “It’s no good going out and buying a Lexion on tracks if the chaser vehicles are on narrow tyres. Trailers can be the main culprits.”

“With machines like beet harvesters weighing in some cases more than 50t, different options for controlling compaction should be considered by every farmer. Controlled traffic management is an option, but so is actively trying to reduce traffic by linked operations or alternatively using tandem axles, dual wheels or lower inflation pressures.

The traffic control effects on field operations speak for themselves, he added. “For systems which had no compaction to get rid of, there’s up to three and half times less energy used to establish crops, due to less passes with multiple pieces of kit.”

“Establishing a subsoiling strategy is a good first step. Headlands and gateways need particular attention, as do wheel markings.”