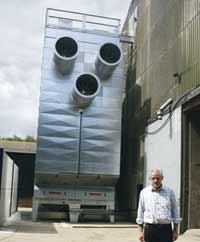 Having to start up the grain drier has become an all-too-frequent task in the last year or two. Emily Padfield visits two farms who have recently updated their drying setups to good effect.

For John Westgarth of GH Farms, Bishop Auckland, 2008 was a good year to have installed a 24t/hour drying facility. Previously, the farm had a continuous flow drier which managed 12t/hour with the wind behind it, he says. “It needed constant supervision and, in a situation where the person hauling the grain needs to look after the drier, this resulted in a lot of downtime.”

The 345ha (850-acre) farm grows predominantly wheat and oilseed rape, meaning there can be a lot to dry in a short period of time. The farm also uses a contractor for combining, so at any one time there can be two large-capacity combines working flat out, meaning a lot of grain coming in at once.

“Changing driers involved a long thought process,” explains Mr Westgarth. “The old 12t/hour drier stood in the corner of the shed, taking up 600t of valuable storage space. We looked at moving it, updating the elevators and re-siting the pit, but compared to installing a complete new system, the difference only worked out to be the cost of the drier itself, which was about £30,000.”

Initially, Mr Westgarth had considered a 16t/hour unit but opted for a larger Allmet 24t/hour drier to increase throughput. The new drier runs on cheaper kerosene rather than red diesel, and uses an inverter to control fan speeds, reduced power consumption by 27% for every 10% drop in fan speed.

Customers are increasingly looking for power and fuel savings, explains Charles White of drier manufacturer Allmet, Northallerton, North Yorkshire. Existing driers tend to operate fans at full power and with open air bleeds to reduce crop damage, explains Mr White. “By electrically controlling fans, speed can be varied and because the heating-to-cooling ratio is kept constant, fuel use can be reduced, too.”

“Our existing drier had become woefully under-capacity, and last year we had to run it day and night to cope with the mountains of wet grain.

“There’s a great tendency to think that, because they’re not on wheels, grain driers are fixed equipment. If we had worked out the figures before, we would have undoubtedly grasped the nettle sooner. In fact, the cost figures worked out to be surprisingly similar to the John Deere 8330 also purchased this year,” he adds.

The 41t/hour Allmet drier was installed earlier this year to replace the original unit, using the existing conveyer and elevator system but with a new feed and emptying conveyer.

To cope with the output from the farm’s two combines, a NH980 and JD T670, there’s a large concrete pad for storing wet grain, but the throughput of the new drier should be enough to cope without having to run it through the night, adds Mr Hornshaw.

The net investment totalled £85,000 but, because the new drier also runs on kerosene rather than diesel, he reckons there will be a fuel saving of about £6500 at current fuel prices. “Added to this, the labour savings from not having to employ someone through the night will amount to £7500, plus time and labour wasted handling grain from other parts of the farm at £3500 and electricity costs of £800.

“So far, we’ve worked out that we will save about £17,500 ayear, meaning the investment will pay for itself in five years,” says Mr Hornshaw.