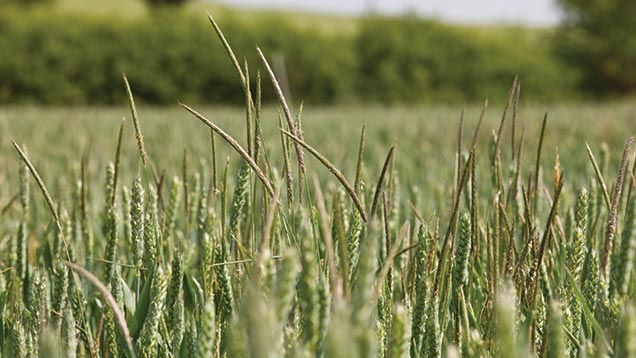 Grazing livestock as part of a long-term plan to control blackgrass could help arable growers beat the yield-sapping weed and improve soil fertility.

Where blackgrass resistance to herbicides is forcing growers on to the back foot, agronomist Stephen Briggs is championing the introduction of rotational livestock grazing, a weed control method normally reserved for organic farmers.

He explains that the endless cycle of blackgrass propagations needs to be broken and that bringing livestock to an arable farm could be key.

“Most farmers are growing the same things at the same times, year after year and the life cycle of blackgrass is never given a break. The seed is never buried long enough so that it becomes unviable,” he tells Farmers Weekly.

See also: How spring cropping can help you beat blackgrass

To regain control, Mr Briggs recommends growers put a plot down to grass for one to two years and graze livestock to stop the blackgrass flowering and going to seed. By doing this, the weed seed population in the ground is reduced to a more manageable level.

HGCA research found that at least 95% blackgrass control is needed to prevent weed populations from increasing.

The research also says that grass leys for up to two years will give an 80% reduction of the blackgrass seedbank and Mr Briggs says adding livestock could provide the extra control needed to get on top of the weed.

“Not only will this knock back the blackgrass population, it will help with other weeds and boost fertility too,” he adds.

If the prospect of managing livestock is not an appealing one, Mr Briggs says this is an opportunity for growers to work with neighbouring livestock farmers.

“For many arable farmers it isn’t a sensible option to have livestock of their own because they haven’t got the skills, infrastructure or time,” he says.

“So teaming up with local livestock farmers to give access to your land would normally be the best way to introduce livestock into your rotation,” Mr Briggs adds.

As with choosing any crop variety, selecting a competitive grass seed such as perennial ryegrass mixed with red or white clover will raise the odds of successful rotational grazing.

He recommends a two- to three-year ley, but acknowledges the time period will be determined more by the individual grower’s needs.

When it comes to the livestock, he says grazing a combination of sheep and cattle would offer the best results, but of the two, he would favour sheep because they tend to graze the grass tighter.

“Farmers need to think of this as a long-term solution. It is not a quick fix, but in organic farms weeds aren’t really much of an issue because they use the animals as a primary means of weed control,” he adds.

John Pawsey organically farms 607ha of heavy clay arable land near Bury St Edmunds in Suffolk, growing winter and spring wheat, oats, barley and beans. A tight winter cropping rotation has resulted in blackgrass getting out of control in some fields.

For years a neighbouring sheep farmer grazed his land at Shimpling Park Farm as a cheaper alternative to mowing.

He wants to double his flock number this year and then eventually move to 1,000 sheep, selling breeding stock and fat lambs.

“We bought our own flock because we needed to manage the grazing ourselves and it allowed more control as we looked to extend to a six-year rotation,” he says.

“If you are looking at introducing low-input livestock into your rotation then all you need is some electric fencing and a mobile water bowser – it’s not that expensive,” Mr Pawsey adds.

By coincidence, a local shepherd was looking for work so Mr Pawsey took him on part-time. He admits that if the shepherd hadn’t been available he probably wouldn’t have invested in sheep as he lacks the knowledge to run the flock himself.

Mr Pawsey is taking a ‘many little hammers’ approach to dealing with his blackgrass. As part of this, he will put a plot down to grass with white clover and perennial ryegrass for two to three years.

He admits while rotational grazing alone is not a solution, it helps as part of a long-term strategy, which also includes delayed drilling and spring cropping.

By introducing livestock, he argues there are opportunities to make money from land that would otherwise be mowed or used to grow cover crops.

“For example, if you are spring cropping you might as well put some stubble turnips in and introduce sheep over the winter to make some money and boost fertility too,” he says.

In trials with the Duchy Future Farming Programme, Mr Pawsey has so far seen a 20% blackgrass reduction on grazed plots, with the project concluding this autumn.