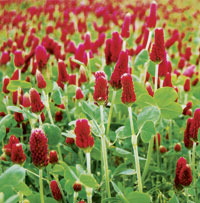 With next season’s fertiliser prices breaking through the £200/t barrier, green manures could prove attractive this coming season. Philip Case looks at the options and how to manage them.

Growing a cover crop or green manure is mainly associated with building fertility in organic systems, but the rise in fertiliser prices means that conventional growers could benefit, too.

Anton Rosenfeld, a research officer at Garden Organic, highlighted at a recent Garden Organic green manures workshop in Warwickshire that from 2003 to 2009, fertiliser prices rose by 51% in the UK. In contrast, the cost of growing green manures had risen by just 7% in the same period.

While not a new concept, conventional growers are being urged to look again at green manures as the change in economics will mean greater savings in fertiliser inputs.

The amount of nitrogen contributed by green manures depends on several factors, including weather, management, and availability of nutrients and the correct rhizobacteria in soil.

Francis Rayns, a research manager at Garden Organic, highlighted one ADAS project on a clover crop that fixed 500kg N/ha per year, but 100-300kg N/ha is more typical.

On top of the fertiliser saving, green manures bring a number of other benefits. They can improve soil fertility, structure and water-holding capacity, suppress weeds, stimulate microbiological life in the soil and help the environment by reducing leaching risk in winter.

The result is an improved performance in the subsequent crop and often beyond. Dr Rosenfeld pointed to one case where there was a 0.8t/ha improvement in barley yield. With potatoes, there was an extra 7.7t/ha [£121/t 2009 conventional maincrop potatoes] – a cost benefit of £932/ha.

Green manures can be grown as annual crops or just for overwintering areas or even undersown in cereal crops. But the key one highlighted by Mr Briggs is the winter crop which is incorporated prior to spring drilling, releasing the fixed nitrogen and other nutrients to the following crop.

So what green manure options are there? There are a number of crops, the key ones being black medick, white or red clover and lucerne.

However, it is important to choose the right species for the right task. Although red clover is a popular option, it can be disease prone when grown too often, so ideally a five-year break should be left between crops.

Therefore, growers should look at other species, too. To prevent overwinter leaching, grazing rye is by far the best. It establishes rapidly producing lush leaf growth and work by Garden Organic has shown that it will typically reduce leaching of nitrogen by 90% over the winter period. But it must be established early in September to be effective.

Over a longer period, white clover or lucerne are the best bets. Although slower to establish, they show better persistence over a longer period than the other species. Lucerne also shows good drought tolerance on light soils.

Vetch is suited to both light and heavy soils and it fixes nitrogen well, but seed rates may need to be increased for heavier soils.

For a quick flush of nitrogen in the spring, Mr Briggs recommends red clover or black medick, because they decompose rapidly and release nitrogen quickly. Mustard, however, has a woody stem and a high carbon/nitrogen ratio and releases nitrogen later.

For autumn drilling, seeds should be sown into a good, firm seed-bed, and be rolled down well, Mr Briggs advises.

Green manures can be either drilled or broadcast. Any drill that can drill close to the surface and handle small seeds is suitable.

The depth is particularly important for clovers which are small seed and should be drilled no deeper than 1cm or emergence will be poor. Seed costs for clover, sown at a rate of 10kg/ha are typically £60/ha. Generally, green manure seeds cost £2-6/kg. Seed rates for leguminous green manures are typically 10-15kg/ha.

Green manures should be topped before incorporation then they can be ploughed or rotavated in. Spraying with a herbicide is an option for conventional farms. He also stresses that for cereal crops, it is important that they are sown soon afterwards to make use of the nitrogen released.

Looking at this season, Mr Briggs says growing manures was “challenging”, due to dry conditions. But growing mustard with legumes worked particularly well, as a protection against flea beetle.

“The mustard grows faster than the legumes, and the flea beetle preferentially attacks the mustard, leaving the clover to grow underneath. “When you top the mustard off, the clover is fine below.”

Alternatively, growers with severe blackgrass problems looking to fallow badly affected areas could put some overwintered green manure in to protect the soil and provide some nitrogen.

Undersowing a standing crop and keeping it in over winter can be an even better option, says Mr Briggs. “It will help with your blackgrass problem, reduce your fertiliser bill and improve soil structure.”