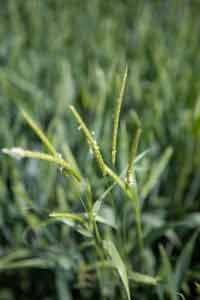 About 85% of Atlantis applications will be made this spring, after delayed drilling and weather prevented more than 16% being applied last autumn, Bayer CropScience‘s Chris Cooksley said.

“The weather and the fact a lot of wheat went in later than planned in mid-October has stopped more Atlantis being applied in the autumn,” he said at a Bayer press briefing.

Atlantis spraying this spring was already underway in many southern and eastern counties, with the potential, he believed, for better control than seen in spring 2010.

“The blackgrass is smaller this spring, there is already active growth and there are lower populations,” he explained. “Of course, where there are resistance issues or no autumn treatment, growers may be more up against it.”

Resistance was a concern, with enhanced metabolism more worrying than target site resistance to Atlantis, he admitted. “There are probably 5-10% of fields where it is fair to say acceptable control is not possible with chemicals alone. Already growers are targeting these fields with cultural controls.

“About 30% of fields are challenging and require optimised chemical sprays for control, which usually means a pre-emergence spray followed by a well-timed Atlantis.

“But that still leaves about 50% of fields where control is possible. Atlantis isn’t done yet,” he stressed.

The key was reducing blackgrass numbers as much as possible so when Atlantis was applied as few plants were left as possible, he said. That meant using cultural control, a pre-emergence treatment as a base, and then applying Atlantis when weeds were small, actively growing and with a good application technique.

But knowing whether you have hit the right timing with Atlantis in the spring was only possible in hindsight, he admitted. “Last year, spraying in February in cold conditions was better than waiting for active growth in April, for example.”

Normally, treatments work best when there was active growth, he explained. “But it could have been as they got bigger, it was more difficult to overcome enhanced metabolism resistance, and they became harder to control.”

This spring he advised growers to try to apply Atlantis when the weeds were small, particularly as there had already been active growth. “Soil temperature is not really a true guide to when to spray,” he warned.