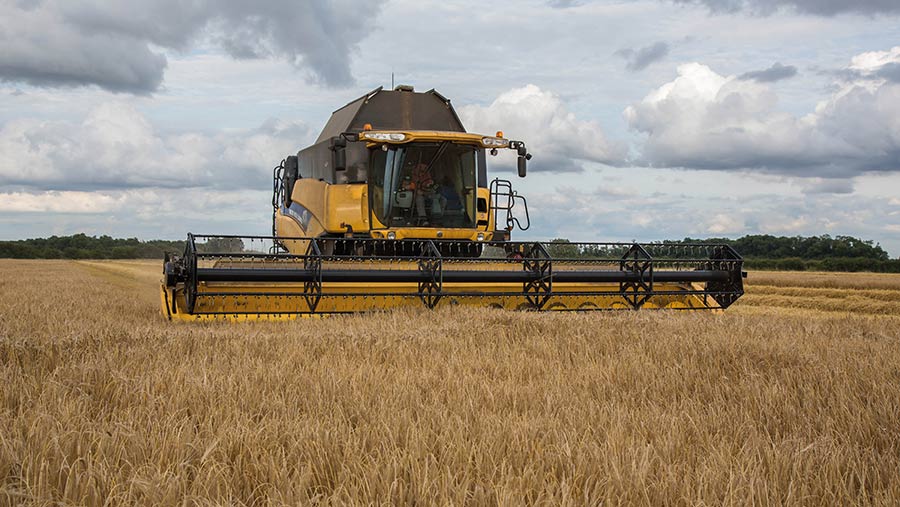 Rain has hampered harvest progress over the past week, but crops are still performing slightly better than expected in most places.

We look at how harvest is progressing around the country, with the first winter wheats being cut in Kent and winter barley harvest now finished on one farm in Perthshire.

Harvest is about three weeks behind normal in Kent, so John Smith, managing director at Weald Granary, is expecting a busy August. Wheat, barley, oilseed rape and other crops will all be cut at the same time, which is likely to create logistical problems.

The store has already taken in 3,000t of winter barley, and yields are reportedly about average. Specific weights are on the light side, ranging from 58kg/hl to 62kg/hl, and several loads have suffered from admixture.

So far the store has seen 1,500t of oilseed rape, and oil contents are lower than usual, averaging 40-42%, although some loads have been up to 45%. Farmers have also been cutting winter wheat and peas, as well as winter linseed, with early yields much as expected.

Over in the South West, Devon Grain has taken in lots of winter barley, with oilseed rape just beginning to come in, according to store manager Duncan Lyon.

Specific weights in winter barley are averaging 64.6kg/hl, with crops coming in dry before the rain at an average of 12.6% moisture. Screenings have also been reasonable.

“Farmers are generally pleased, yields are a lot better than last year,” he said.

Oilseed rape harvest is in its early days but is looking promising, with moisture levels averaging about 10%.

Further north, Duncan Whiteman is yet to start harvest at his Arlescott Farm near Telford.

“We’re hoping to start next week, and crops are looking pretty good. The Extase first wheat is looking particularly well, so I’m looking forward to getting into it,” he said.

According to Stuart Dolphin, managing director at Grainlink, winter barley has been good on the whole, with specific weights averaging in the high 60s. Yields have been mixed, but fortunately very little has had to be dried.

Combines are now rolling into oilseed rape. “Reports have so far been quite pleasing. It’s still early days, but yields are ranging between 3.7t/ha and 5t/ha, with oil contents averaging 43-45%,” he said.

Winter wheat on lighter land is also ready to harvest, albeit at high moisture contents in the mid-20s. “There is still 99% of the crop to go. Early indicators suggest a good harvest – I do wonder if proteins will be lower than previous years, but it is far too early to tell,” he added.

“Pretty much all of the winter barley has been cut in the area, which is similar to last year. We’ll be into the spring barley three to four days early, but that might be varietal – Sassy is an early variety, and we don’t want late crops here because of the risk of skinning and pre-germination,” he said.

“I did a seed rate trial with Kingston, comparing a normal rate with +12% and +24%; the normal rate was 0.5t/ha better off,” he said. Straw yields have also been greatly improved on last year, at 12 bales/ha versus 4.9/ha last harvest when he to buy in a lot of straw.

The combine should be making tracks into the 283ha of Sassy spring barley by the end of the week, followed by 121ha of Fairing. But the wheat is still very green.

“It’s been a good growing season – although we had two inches of rain in two hours just before harvest, it didn’t flatten anything. The bits of wheat that didn’t get rotted out in the wet winter look very well, so there’s potential there,” said Mr Ivory.