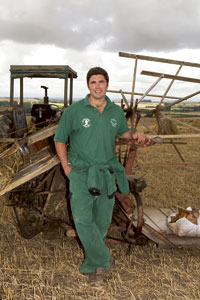 Harvest was almost over for our southern Barometer farmers earlier this week, but frequent damp spell were getting in the way. James Andrews and Philip Case report

Peter Snell
Peter Snell’s harvest was drawing to a close at North Farm near Wimborne, Dorset on Tuesday, but the wet weather forecast for the next few days could drag out the finish.

“We’ve only got about a week’s worth of combining to do, with 76ha Claire, 20ha Einstein feed wheat, 6ha Solstice, 5ha Tipple malting barley, and two days worth of thatching straw. The forecast is for rain the rest of the week, but hopefully we’ll get going again before the weekend.”

So far yields had been good across the board with a 4.47t/ha farm average for oilseed rape, 11.35t/ha for Einstein, 4.07t/ha for Genki combining peas and 11.81t/ha for Solstice. “Due to the high yield, protein content in the Solstice is down to 11.5%. But Hagbergs are in the high 200s to low 300s and I hope we’ll still get £5-6/t premium. We even used late foliar nitrogen to try to boost protein.”

Saffron feed barley was slightly disappointing at 7.07t/ha, but Tipple for malting was averaging 8.26t/ha at 14% moisture.

“We invested £32,000 in a new weighbridge this season and it’s great to be able to get accurate figures.”

By Tuesday (17 August), 200t Maris Widgeon thatching straw was already in-store, with just 50t left to gather from a 70-acre block. “We finished at four this morning after doing 198 bales with our 30-year-old Howard square baler and 44 with our farm-made press baler.”

Eighteen workers were gathering sheaves for the balers and all had to be put under cover before the dew came down, he said. “We’ve also baled our Genki pea haulm for the first time and we’re selling it to the merchant at barley straw prices – we got between 0.5-0.75t/acre, so it’s a bit of a bonus.”

He was hoping to start drilling Sesame and DK Cabernet oilseed rape later this week, but wet weather was looking like pushing it back a couple of days. “We’re sub-soiling at the moment and we’ll go over with our Rexius Twin cultivator before drilling with our new 6m Vaderstad Rapid.”


Harvest at Andy Barr’s East Lenham Farm near Maidstone was about 70% completed on Tuesday (17 August), but two thirds of the wheat was left to cut.


“I’ve got about 125ha of Humber and Viscount still in the ground.”

He finished cutting milling wheat on 10 August, but persistent wet weather meant the combine had only been out once since. “We did 20ha Viscount yesterday [16 August], but it’s not looking good for the rest of the week.”

He was concerned that the best looking crops were left to cut and wheat was starting to blacken in the ears. “Due to the forecast and Viscount’s propensity to sprout I will be cutting at much heavier moisture than I would have been a week ago.”

Cordiale and Gallant on some of his stonier and sandy ground had performed relatively well, with average yields of 9t/ha, he said. “It is nothing spectacular, but to get better yields on that land I need heavier land farmers to be complaining of waterlogging.”

His 65ha Tipple malting barley returned pleasing yields and quality was good. “This year on the sandy ground with the lack of rain I thought we might only get 6.5t, but it looks like we have got more than 7t/ha.” Bushel weight ranged from 69-70kg/hl and grain nitrogen averaged 1.55%, he added.

But Dimension on sand yielded just 3t/ha. “It looked like one of the better crops I’ve had on that ground. We had the right plant population, it was disease free and standing up nicely,” he said. “We did not have any bad pigeon damage; it was almost certainly the lack of rainfall over the season which affected it.”

Oilseed rape drilling was planned for Tuesday afternoon using a sub-soiler fitted with Techneat seeder and fertiliser banding units. “I’m calibrating it at the moment and will hopefully go out later.”