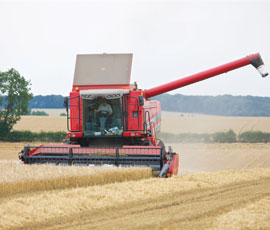 Harvest is all but complete in the Southern half of England, but farmers are still battling against the elements further north.

In Oxfordshire, harvest had been hideous at Wicklesham Farm, Faringdon, with Tom Allen-Stevens bemoaning poor yields and dreadful quality across the board.

“I reckon wheat yields will be about 20% down, and bushel weights haven’t lifted out of the low 60s,” he said.

“This harvest has been desperate and depressing on every front – it hasn’t been a challenge, it’s been a torture.”

Tony Higgins had similar thoughts near Langport, Somerset, where the final 3.2ha of spring beans would bring harvest to a welcome end.

“It’s been a diabolical harvest – the hardest I have known in 55 years of farming,” he said.

It’s bad enough to have to dry every tonne, without having poor yields and bushel weights as well. It’s a year we all just want to forget.”

In Yorkshire, Caley Sackur finished combining at Lodge Farm, Tibthorpe, on Saturday, and was relieved to have got harvest over and done with.

“It’s not been the easiest harvest,” he said. “Everything has yielded 1.2-2.5t/ha lower than normal, which isn’t brilliant. But it could have been worse.”

About 95% of farmers in the area had now finished harvest, he added. “We were two weeks late all the way through harvest, but we’ll start drilling wheat on Wednesday, which is only a week behind last year.”

Further north, there was a lot of wheat still to cut around Clackmannan, so James Muir was particularly pleased to have finished harvest at Arns Farm on Saturday night.

“We cut some wheat on Friday and it wasn’t too bad, although it didn’t yield as well as it could have done, because the ears didn’t fill out,” he said. “There wasn’t a lot of straw, either.”

And in Aberdeenshire, Doug Fowlie had finished harvesting spring barley today (17 August) at Millhill Farm, Longside, but still had oats and wheat to do.

“It’s been a bit of a struggle this year – we’re two weeks behind where we’d like to be,” he said.

Yields were all 25-30% below the 10-year farm average, and although the weather had been stop-start, it was the lateness of crops that had delayed harvest, not the lack of dry weather.

“We’re used to the weather in Aberdeenshire – it hasn’t held us up any more than normal.”