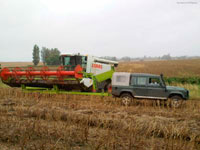 Many people managed to cut more crops over the weekend, but rain today (23 August) has brought harvest to a grinding halt again.

The combine was rolling this morning at Geoff Alderslade’s West Fellgate Farm, Wardley, Tyne and Wear, but rain was forecast. “It is just starting to spit.”

So far he was more than halfway through harvest, but having only started on wheat last week, he had 75% of wheat left to cut.

“Quality has been pretty good, with the odd trailer load coming in below 13% protein. I thought Hagbergs would be way down by now, but they are still over 300.”

“It’s very cold and autumnal – and the week ahead does not look too good. Only about 13% of the malting barley has been cut up here, and it will mostly be ripe by mid-week.”

“We’re getting a bit fed up with it now. The wheat is suffering now – it’s starting to look a bit grey.”

“There’s still a lot of wheat left out there – probably 50% – because a lot of people have been waiting for it to dry out.

“It’s so wet and humid now, the issue is how well the wheat is going to hold up this week.”

In Somerset, Tony Higgins had finished harvest at Middlegate Farm, Langport, and yields for all crops were down on last year.

However, many people in the area still had hundreds of acres of wheat to cut, and were seeking help from those who had finished, he said.