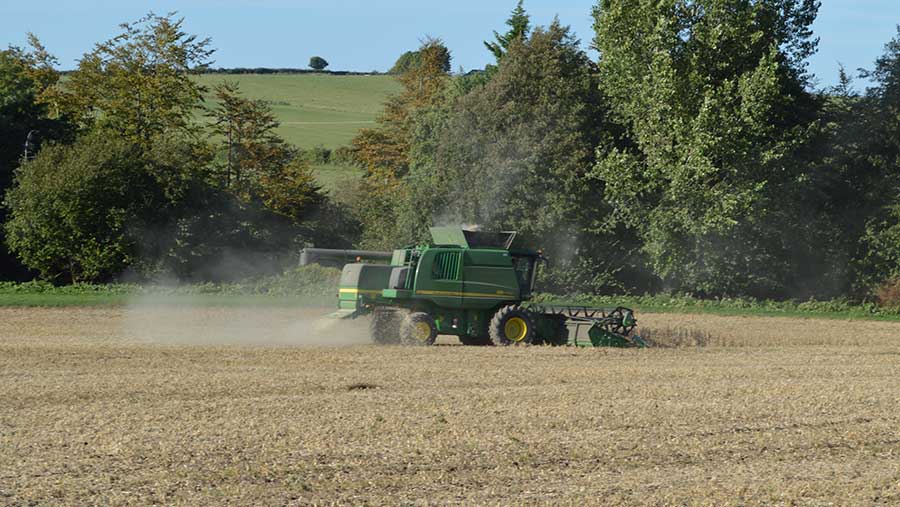 One Dorset grower is planning to drill soya beans for a second season despite a mediocre yield in his first attempt, driven by a desire to grow a protein crop for the farm’s dairy herd.

James Cossins, farming with his daughter Georgie, cut the first soya crop last week, which yielded 1.25t/ha in a year when many spring crops did poorly, but he believes they could be hitting 2t/ha in the future.

“The soya was a bit disappointing but we have learned a lot, and if we keep the pigeons off, use better ground and have better weather, this could be a useful crop,” he told Farmers Weekly.

With the uncertainty of Brexit next spring, Mr Cossins is keen to try growing a protein-rich crop even though it would need processing before feeding to his 320-strong dairy herd.

Plans for next year

Next year, they may try a more fertile field and increase the seed rate to push yields towards the 2.5t/ha target that soya experts say is possible in the UK.

This year, the UK soya crop area rose sharply, with about 180 farmers growing 3,200ha, and there are hopes that the area may reach 5,000ha next year.

Mr Cossins was impressed that the crop did not lodge and the pods did not shatter, but many pods were close to the ground and were difficult to combine. Inputs were fairly low, with two herbicides used and a light dressing of phosphate and potash.

“Overall, the crop yielded 1.25t/ha, but we are confident we could manage 2t/ha, as on the better ground the crop was yielding 2.5t/ha,” he adds.

He grew 12ha of the variety Siverka on the 900ha-plus land he farms at Rawston Farm just three miles east of Blandford Forum in the Tarrant valley. It is the AHDB Blandford monitor farm.