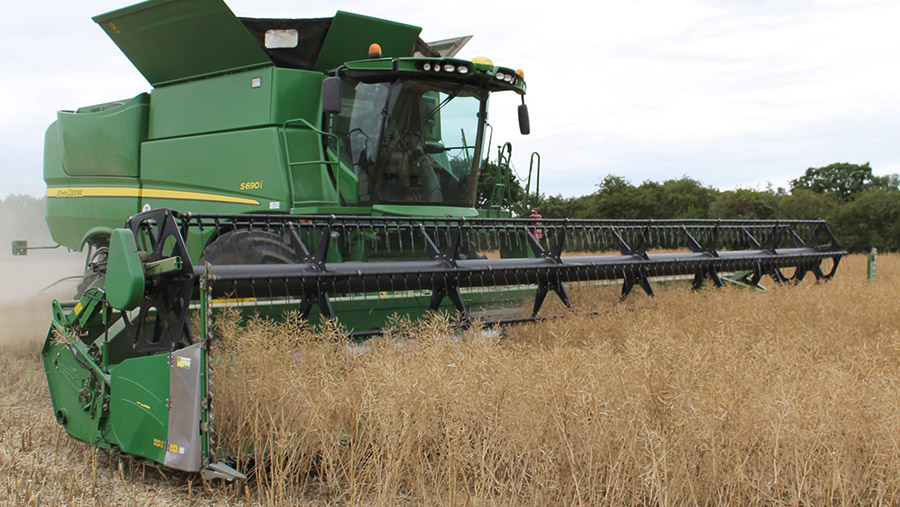 The 2020 oilseed rape harvest is well under way after a drier spell of weather at the weekend, with crops proving very variable, ranging from above average to poor.

This weekend marked the start for a number of farm across England, with winter barley showing the cost of the spring drought with some disappointing yields, especially in the East.

Gloucestershire farmer Jake Freestone kicked off with his first video blog of harvest 2020, cutting Campus oilseed rape with a view of Bredon Hill from the cab.

He has 200ha of OSR to cut at Overbury Farms and on Sunday (12 July), he was cutting a good part of the field with the meter touching 4t/ha.

But there are poor areas too and he is expecting a very variable harvest.

Over in Cambridgeshire, Russel McKenzie has posted a pic of his heap of rapeseed off 44ha and is wondering what the final yield will be once it has been across the weighbridge.

Doesn’t seem a lot off 44 hectares, but think it’s better than the data suggested initially.

However, I’ll reserve judgement until after it’s gone over a weighbridge! pic.twitter.com/SPCQidPUuW

In the same county, Will Parker’s field of OSR near Duxford yielded 3.7t/ha – much greater than in previous years.

He believes turnip yellows virus resistance has helped with the yield increase.

In Berkshire, Colin Raynor is pictured harvesting oilseed rape coming off at 10% moisture and yielding above average, noting that the crop was good in a difficult year.

We are harvesting oil seed rape this afternoon. 10% moisture. Yielding above average. First good crop of oilseeds we have harvested this year. Thanks for my team for producing a good crop in a difficult year. @TheNaac @NFUSouthEast @UnitedOilseeds pic.twitter.com/oNVT5Sgei6

The oilseed rape harvest has also kicked off in Hertfordshire, with Eveey Hunter seeing Campus coming off at 9.9% moisture

But it’s not just oilseed rape, winter barley is being cut.

In Norfolk, farmer Chris Eglington is seeing the cost of the May drought with a disappointing 7.4t/ha at 14.5% moisture.

It’s something that many growers are facing this season.

Made a start on the winter barley harvest this afternoon. #MakingHeaps pic.twitter.com/MYqY4Y02k1

And further north, Rookery Farms is well into its winter barley harvest, with Berkshire Farm Girl posting some clips of barley cutting on the lower Berkshire Downs, north of Newbury.

And finally…winter linseed is go.

This crop in Hampshire has been desiccated with glyphosate.

Combine parked up due to rain, but Will Parker's field of OSR in Duxford, Cambs, has yielded 3.7t/ha – much greater than in previous years.

No till drilled, with the vigour to get away from adult CSFB, Will highlights TUYV resistance as a key element behind the improved yield pic.twitter.com/2Y66y8Xj2k