Cereal growers are becoming frustrated with the lack of progress, as crops are ripe and ready to come off the field but rain continues to hamper harvest.

Where cutting has been under way, many growers are very pleased with crop yields, as driers swing into action to compensate for grain coming in under less-than-ideal conditions.

The biggest worry for milling wheat growers will be meeting the Hagberg value required to make their milling premiums, with figures likely to fall rapidly if the wet weather continues. 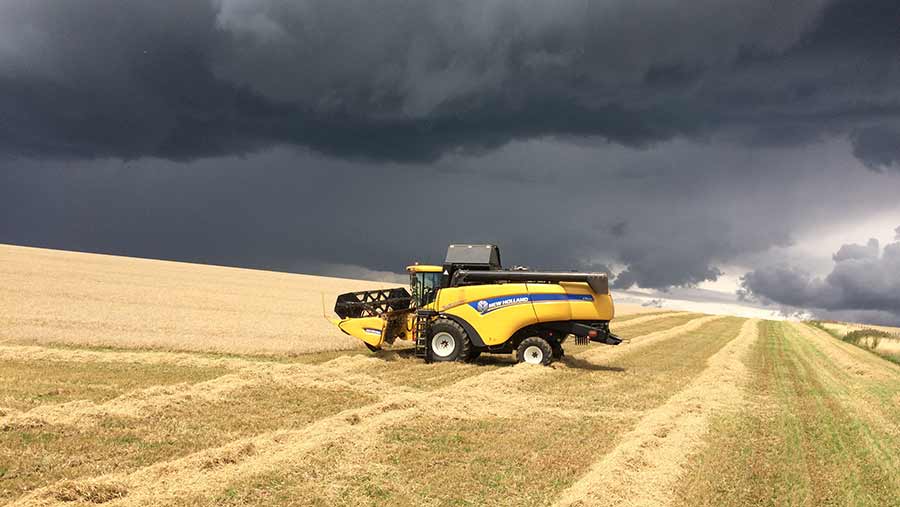 In Shropshire, Rob Bebbington has been unable to get the combine out for the past 10 days at Fieldfare Farms, Whitchurch.

“We had three inches of rain in July and by 4 August there had already been 9mm.”

Mr Bebbington had managed to combine 77ha of winter barley at 6.2t/ha, with a specific weight of 61kg/hl, but the straw was still on the field due to the rain.

“I am about to start on Bamboo and Alizze oilseed rape, which look good, but were sprayed off three weeks ago.”

He also has Crusoe, Skyfall and Lili wheat to cut, which look good and even. “The rain is just a bit annoying when things are good to go.”

Harvest is also proving frustrating for Edward Parsons at Templemans Farm, Salisbury, Wiltshire, although yields are good so far.

Mr Parsons had managed to cut 57ha of Crusoe wheat at 18-19% moisture, but the remainder has gone flat because it is so heavy.

“Crusoe never lets me down and is worth growing even for feed,” he said. Mr Parsons had also cut 40ha of Planet malting barley, which did 7.4t/ha.

“We lost a lot as it brackled, but I also have Propino, which I am just getting into and that looks great.”

Stephen Whitby got off to a fantastic start with his winter barley and a little wheat at Rowley Farm, Slough, Berkshire, but things had gone rapidly downhill since.

“I am hoping to get started again today as there are still three to four days of wheat left to go. Then it will be straight into the spring barley, which is desperate to be cut.”

Mr Whitby’s winter barley ranged from 6-8t/ha, largely down to soil types. “Bushel weights were good this year though and it has all been sold.”

The Skyfall wheat that had been cut had achieved good quality at 13% protein with Hagbergs of more than 300 and yields of 8.5-9t/ha. “It was all moist, but I do have driers as a backup that are now working full-time.”

In Cambridgeshire, harvest was very stop-start for Gary Mills at Haynes Farm, Peterborough, with Planet spring barley just started on Friday morning (4 August) and looking like it had suffered in the dry spring. Mr Mills also had 81ha of Crusoe and Siskin wheat to cut, which he said did not look too bad.

“I have done winter barley, oilseed rape and mustard. The Craft barley was average at 7.7t/ha on light land, but it has all been sold for seed. I think it suffered in the hot weather early on.”

Harvest was also not going too quickly for Simon Dann at Pound Farm, Tuddenham, Norfolk. The 40ha of Cassia winter barley was all done, with an average yield of more than 10t/ha, having ranged from 8.9-10.6t/ha.

Mr Dann had also cut some Skyfall wheat, which came in moist, but did 10t/ha, with about 30ha left to cut. “It looks alright, but we just want some sunshine now – however, it is raining again.”