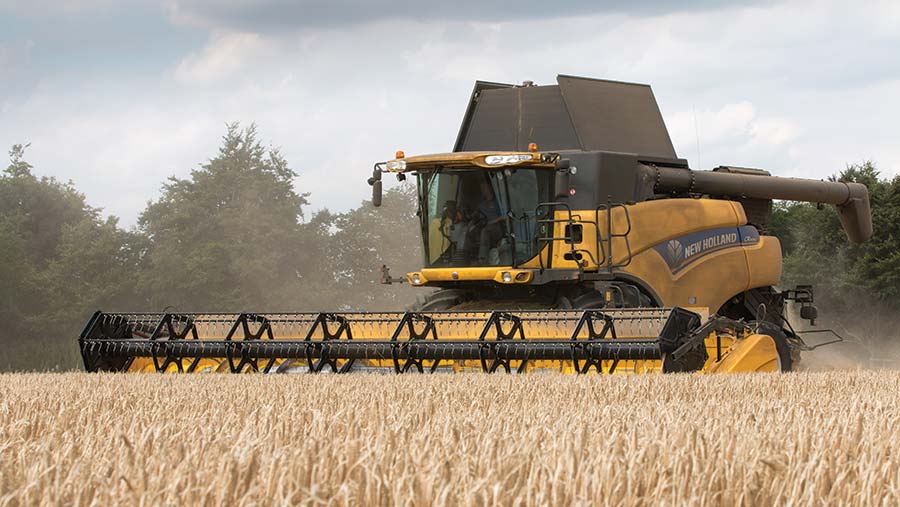 The Scottish winter barley harvest is showing grain quality mostly better than expected, although yields have taken a knock following the wet spring and then dry summer.

Barley growers on heavy ground have done well, according to Gary Bright, managing director at Grainco, and they are achieving what they expected.

“Barley seems to have done rather well and moisture has been 14-16%. Virtually all of it has had good specific weights at about 60-70kg/hl,” he said.

Specific weights were good last year but yields were down, so there were concerns there could be a similar situation this year.

Mr Bright expected oats and oilseed rape to be ready to cut by the end of the week, which was about a week earlier than normal.

The winter barley harvest was about three-quarters of the way through, according to Robin Barron, general manager at East of Scotland Farmers.

“It’s shaping up to be an early and concentrated harvest – but we’re still trying to empty our sheds of old crop,” he said.

“The quality is good – all the malting varieties are making spec and the yields are above expectations,” Mr Barron added.

Malting barley screenings have been 7% through a 2.5mm sieve with 70kg/hl specific weights, with the variety Venture proving the standout variety in terms of quality.

“Yields are down but not as much as feared – the spring-sown crops have got people worried but the proof will be in the pudding,” he added.

Further north, the winter barley harvest has met expectations, according to Simon Barry, chief executive at Highland Grain. Specific weights have been 58-66kg/hl with moisture levels at 15-17%.

Venture, Pearl and Craft malting varieties had nitrogen contents of 1.63-1.84%, but Venture stood out particularly in terms of quality.

He expected wheat to be at least three weeks to a month earlier than normal and spring barley to be about two weeks early.

“It may have an impact on yield and the moisture may be affected in crops on the thin land – we expect variable results,” he added.

“There isn’t any concern over crops because we won’t know until the combine rolls in,” he said.

Jack Parsons, farm manager at Mertoun Estate Farm, has cut 40ha of six-row hybrid variety Sunningdale, a week earlier than normal and has a further 300ha left to cut on the farm near St Boswells near Kelso.

“The yield has been disappointing at just under 7t/ha – the wet winter and spring has done damage,” he said.

However, he is hopeful it will improve. “The specific weights are okay, but a lot of the light grains are being lost off the back of the combine – they just never filled,” he added.

“It always looked healthy in the field, so we hoped for more from it, but it had everything against it. We budgeted for 8t/ha but we won’t make that – I’ll be happy with 7.5t/ha,” said Mr Parsons.