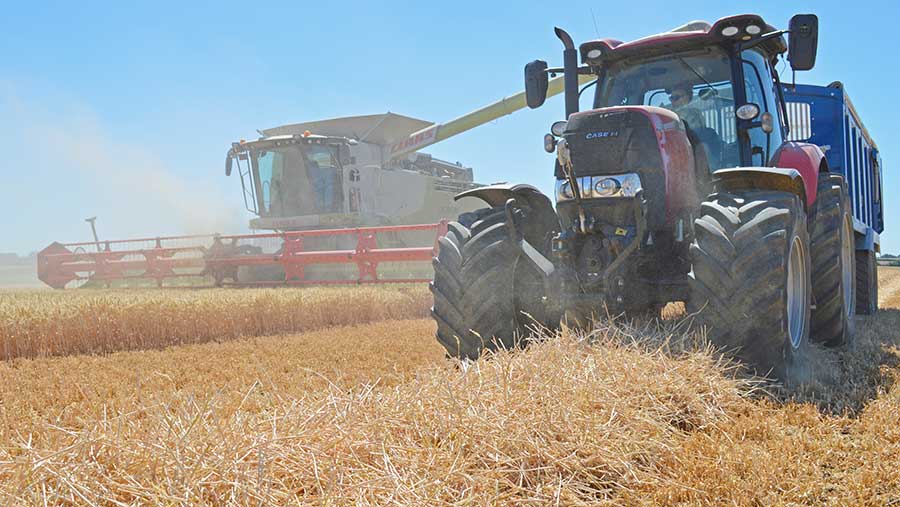 Wheat growers who have taken action to prepare for dry weather, such as using high seed rates and no-tillage, are seeing better-than-expected yields in a generally disappointing wheat harvest.

One light-land Suffolk estate is seeing more encouraging yields than first feared as it has adjusted its wheat seed rates and early spring nitrogen while using plenty of manure to retain soil moisture.

Simon Eddell, farm manager at Rougham Estate Farms, says his yield of Skyfall winter wheat is well above 8t/ha, which is a result of improving organic matter and encouraging growth early in the year on his light soils.

“Five years out of six we have a dry spring so we try to encourage our winter wheats early with high seed rates and early spring nitrogen,” he told Farmers Weekly.

In dry years, tillers are lost in the spring so he looks to drill wheat at 350-360 seeds/sq m and applies good doses of liquid nitrogen in March to encourage more tillering.

He also looks to use as much organic material as possible, such as sewage sludge and chicken manure, to try to hold on to moisture in his soils after wet winters.

“Skyfall is our top performer, yielding 8.6-8.7t/ha when we budget for 9t/ha grown as a first wheat, and has produced a good bold grain sample,” he said.

He grows about 350ha of wheat and his feed varieties, Santiago, Graham and Shabras, are averaging 8.4t/ha. He is due to finish wheat harvest this week.

The estate, just east of Bury St Edmunds, has 1,100ha of cropping on soils ranging from blowing sands to medium clays, and his 100ha of Maris Otter winter barley did 6.7t/ha and made malting compared with a budget of 6t/ha. Even spring barley Propino yielded a respectable 4.7t/ha on very light land.

Kent grower Guy Eckley is quite pleased with his wheat yields of 8-9t/ha, with his no-tillage approach proving its worth as his soils were better able to hold on to moisture for longer.

“Wheat yields are better than I first thought on our clay soils at 8-9t/ha – and even 8t/ha on some of our lighter land,” he said.

He has harvested 300ha of winter wheat, largely Skyfall with some Crusoe, on his cold wet Weald clay land at Saynden Farm on the edge of Staplehurst, just south of Maidstone. He changed to direct drilling allied with the use of cover crops in 2011 to improve efficiency.

His milling wheat averages 9t/ha over the medium term compared with 8-8.5t/ha under his previous minimum tillage regime, as his soil structure has improved as a result of direct drilling, cover crops and sheep grazing.

“Direct drilled crops are always slower out of the blocks, but the soils are better able to hold on to moisture for longer,” he said.

Grain trader Glencore is in line with this view of the national crop, with this week seen being very busy for wheat cutting across most of England.

“Wheat is not the disaster we had first feared and the quality is really good,” said the group’s grain trader Tom Eaton.

With the bulk of the milling wheat likely to be cut this week and with little rain forecast, the milling premium has already come in to about £7-£13/t over feed wheat compared with £10-£20/t in the second half of last year.