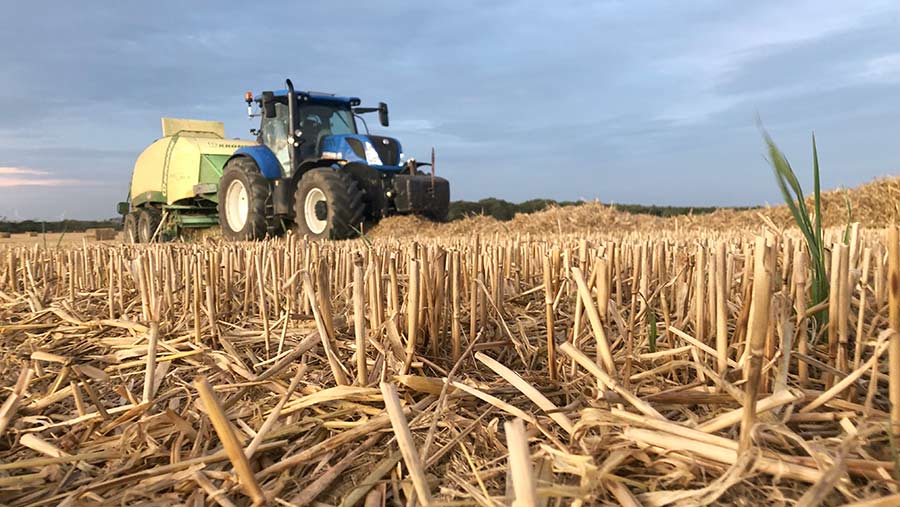 Combines made excellent progress in the final week of August, with much of harvest now wrapped up in the South – although further north there’s still plenty to do, with some fields too wet to travel on.

In Perthshire, about 75% of the spring barley is now safely gathered, according to Robin Barron, general manager at East of Scotland Farmers.

“But the weather is catchy again now, so we’re in limbo with harvest.”

Yields across the board have been above average, and quality is pretty good too, with very low nitrogen contents at about the 1.4% mark, he added.

“Screenings and skins are all fine – although we have seen a little bit of pre-germination. But the vast majority is going into the malting pile.”

Harvest is only about 50% complete in the Newtonards area of County Down, with showery weather frustrating harvest attempts, said Charles Davidson, director at North Down Grain.

“There’s going to be nothing cut this week, and wet ground conditions are going to be a hassle.”

However, the remaining crops are looking healthy, and yields have been terrific, he added.

“Bushel weights are only just reaching where they should be, but yields across winter wheat, winter barley and oilseed rape are outstanding. We’re having to do a lot of drying, but if we get good weather from now on, it will be okay.”

Across the water in Shropshire, Rob Bebbington has finished harvest at Fieldfare Farms, Whitchurch, and has spent the past few days helping neighbours.

“We’ve cut more in the past 10 days than in the first three weeks. It was a frustrating start, but we got there in the end.”

Barbados and Incentive oilseed rape averaged 3.7-4t/ha where it was combined, but flooding earlier in the season meant the whole planted area came in at 3t/ha, said Mr Bebbington.

Illustrious milling wheat made the grade and yielded a pleasing 9.1t/ha, while Valerie and Amistar winter barley, grown for seed, was also good at 9.3t/ha.

Planet spring barley was the main disappointment, averaging 6.2t/ha, but that was probably due to its very low moisture, he added. “It came in at 10-11%.”

“Milling wheat hasn’t been good, with proteins down around 11%.” However, yields have been pleasing, and bushel weights are heavy, averaging 77.7kg/hl.

“Later crops are a bit dark, but we haven’t had any problems with sprouted grains.”

Barley has come in dry and averaged 67.1kg/hl, while milling oats are on the light side at 53.2kg/hl.

The crops suffered a lot with flea beetle, with plenty of live beetles turning up in harvested seed, he added. “But all in all, it’s been a pretty successful harvest.”

Grain has also generally come in dry at Fengrain, with wheat averaging 15.23% moisture, said the firm’s Jonni Henson. Milling wheat quality is a touch on the low side, with Group one and two varieties averaging 12.97% protein, 257 hagberg and 75.5kg/hl.

“Bushel weights have taken a knock in the eastern area, and proteins are generally variable across the milling wheats. But biscuit qualities are standing well.”

Top performers on the protein front include Chochise and Gallant, at 14.3% and 13.54%, respectively, with Gallant also leading from a hagberg perspective at 285.