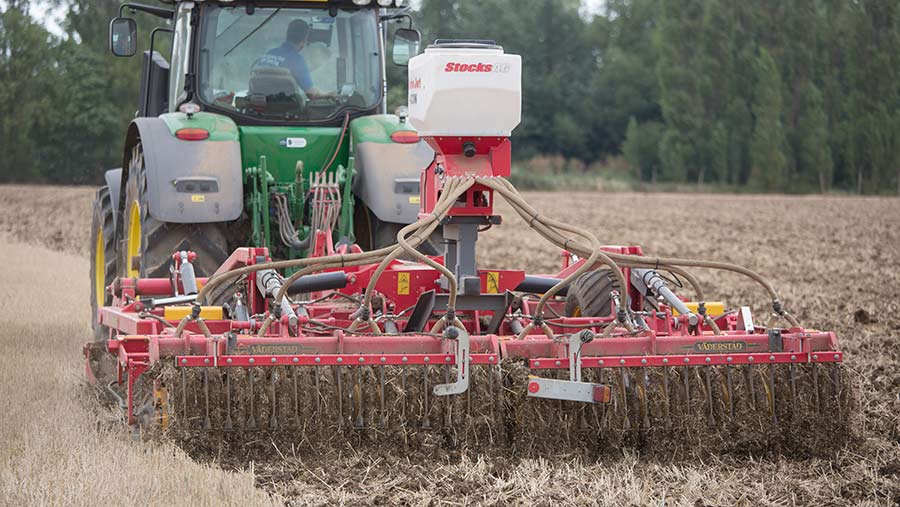 Growers have been anxiously waiting for harvest to measure the true cost of cabbage stem flea beetle damage and assess whether they were right to persist with some crops and how successful their measures were.

This prompted farmers to reign back their planned areas, with some ripping up newly planted fields just weeks after drilling, while others ditched the crop all together in favour of less-risky alternatives.

However, the conundrum faced by growers’ in affected areas is that oilseed rape still remains the best breakcrop around and has led farmers to adjust establishment dates, drilling methods and trial companion cropping to cope with pest and disease pressures. 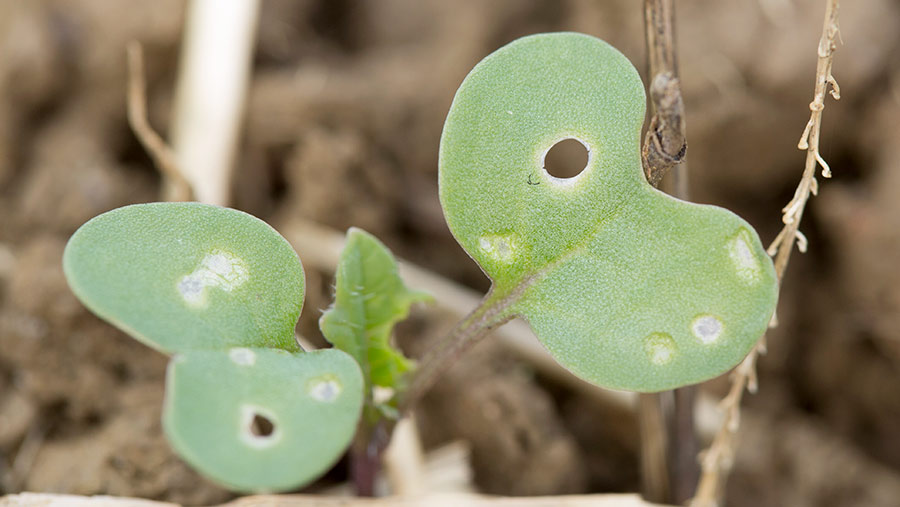 We caught up with six growers in the hardest-hit south of England to find out if it was as bad as first feared.

Wiltshire farmer Ben Jeans had a mixed growing season, with some crops coming under siege from flea beetle, while other fields remained relatively unscathed.

Surprisingly, a field of Campus that escaped the worst of flea beetle attacks actually had more evidence of the bugs at harvest, but yielded a healthy 4.6t/ha.

His hardest-hit fields were attacked immediately after drilling and received two pyrethroid sprays to limit damage.

These had an effect, but in the spring, the larvae hatched in the stems and stunted some crops down to about 30cm tall.

This led to late flowering, but the farm returned a slightly above-average 3.7t/ha, although Mr Jeans thinks the strong field of Campus skewed the final average.

He reckons the worst-affected fields had a yield loss of about 0.5t/ha, coming in at 3.2t/ha.

Mr Jeans plans to grow a similar acreage this year with varieties Campus and Aspire, with the former getting a dose of sewage sludge and the latter muck from the dairy spread umbilically.

He believes the ammonia in the fertiliser can help deter the flea beetles.

To reduce risk further, the farm is increasing the rotation of OSR to one in five years, adding maize into the mix for the dairy cows and only applying a pre-emergence herbicide spray when needed.

Joint-venture partnership Sand Cross Farming, based in St Albans, had some mixed results from OSR last year, with some yielding upwards of 4t/ha after having digestate applied before drilling, whereas other fields had to be written off completely.

Part of the joint venture is James Burrows, who dropped oilseed rape five years ago due to beetle pressure.

After picking it up again two years ago, the partnership now establishes his crop in the most cost-effective way, with home-saved seed and no pre-emergence sprays.

All the rapeseed had one dose of pyrethroids to try to halt the flea beetle, but 9ha were written off early and a further 10ha were left by the combine at harvest.

The crop that was combined did hit the farm’s 3.45t/ha average, although this was tainted by losing the 20ha to flea beetle.

This year, the 1,000ha partnership plans to drill another 150ha.

He used a Weaving GD drill to sow clover alongside the OSR crop, which he thinks helped establish the crop in a heavy flea beetle area.

The crop had heavy pressure from the pest and received one pass of pyrethroid to try to limit further damage.

The OSR was drilled into land that had spring or winter barley the previous year.

Yields across the farm look promising, with one spring barley field yielding an impressive 4.58t/ha, while the average settled about 3.36t/ha.

Mr Gowling admits he has been surprised with the yields and doesn’t have the evidence to put his finger on the exact reason.

He plans to drill the same amount of land this year with OSR and clover.

Farmers and contractors R&R Mills planned to drill about 809ha of oilseed rape last autumn, but the dry spells in late summer 2018 meant farm manager Matt Houldcroft reigned this area back considerably and ended up drilling about 607ha.

The bulk of the crop was hybrid variety Extrovet, with a small 40ha block of Clearfield in areas that had high populations of charlock and hedge mustard.

Establishment involved waiting for enough moisture and moving as little soil as possible with a 6.5m TWB subsoiler.

Mr Houldcroft will sometimes make three further passes to achieve the right consolidation as he says seed-to-soil contact is key in limiting channels for the flea beetle to live in.

This is one of the main reasons the firm only lost 3ha last year.

A pre-emergence application of clomazone, along with three passes with Hallmark (lambda-cyhalothrin) that were applied as close together as possible, curbed the flea beetle’s appetite rather than killing them.

The hybrid variety filled the canopy, with average yields of 3.34t/ha, which is slightly down on the expected 3.95t/ha farm average, but some stronger fields returned 4.94t/ha.

The Clearfield established well, but a lack of vigour left plenty of green stems and open canopies, only managing 2.47t/ha.

An area of 770ha is planned for this autumn with the same varieties.

Over in Norfolk, farmers Richard Cobbald and James Brown drilled 250ha of OSR for the 2019 harvest using a Vaderstad Tempo precision drill mounted on the back of a strip-till machine.

The 3,000ha South Pickenham Estate reckons the drill has slashed establishment costs by up to £100/ha, while using farm-saved seed has meant initial outlay is low and makes growing the crop more viable.

Of the 250ha, Mr Brown says that 25ha suffered really badly with flea beetle, bringing the average yield down.

One 4ha field was so bad that the combine only did two laps of the headland before leaving.

However, due to the low establishment costs, the estate prefers to leave it in the ground as a good spring can revive the badly-hit crops.

All the OSR got one dose of Hallmark Zeon (lambda-cyhalothrin).

The average farm yield has been in a rather rapid decline over the past two seasons since the withdrawal of neonicotinoids.

Before the ban, yields would be in excess of 4t/ha but this dropped to 3.5t/ha in 2018 and was down to 3.1t/ha this year, with noticeably more larvae in the plants and beetles around at harvest.

The estate plans to drill a slightly smaller 200ha area this year with the same varieties Picto and Elgar.

The picture was less rosy for Cambridge growers Thriplow Farms, which is smack-bang in the flea beetle hotspot and this, combined with a very dry autumn last year, meant yields averaged 2.12t/ha.

Luckily, the 2.12t/ha just about meets the break even on the farm’s net margin as establishment costs are low.

Varieties Elgar, Picto and Campus were established with a companion crop of vetch, buckwheat and fenugreek, with drilling delayed until rain was forecast to help the seed get away.

The whole area suffered extensively from flea beetle, which Mr Walston thinks knocked off 1t/ha across the farm.

It was so dry that even the volunteer OSR struggled to get out the ground, prompting thousands of beetles to fly around in search of food, quickly finding his newly drilled plants.

It hasn’t put Mr Walston off and this year OSR drilling was completed on 6 August with plenty of moisture around, and 175ha of Elgar, Campus and Codex with companions is established and looking healthy.