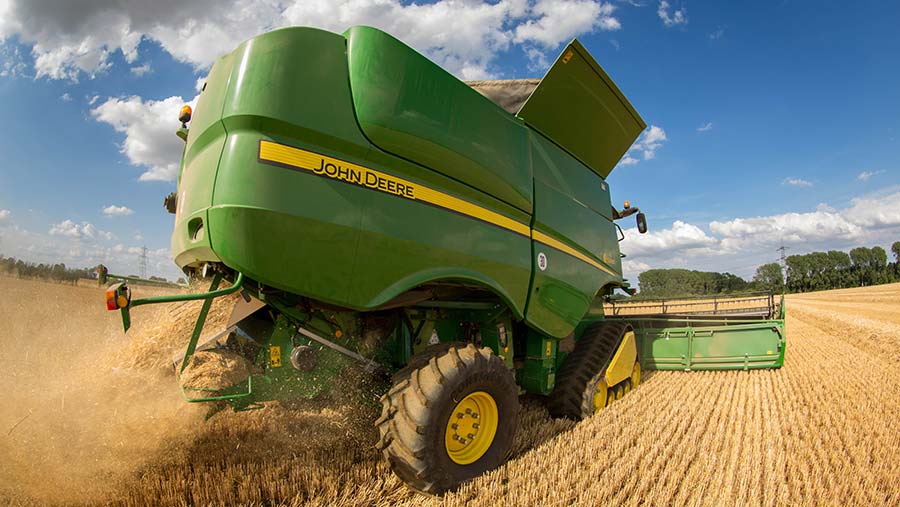 Harvest is kicking off in Norfolk with an early winter barley crop showing a good yield despite near-drought conditions for most of the growing season.

Mike Dennis, farming on the edge of the Brecklands near Swaffham, started cutting his six-row conventional variety Funky today with yields at an estimated 7.5t/ha.

The crop had suffered from very dry weather since it was drilled in the autumn, with virtually no winter rain and then little spring rainfall until late May.

“We are very happy with the yield after such a severe drought throughout most of the growing season, and it is giving us a good grain sample,” he told Farmers Weekly.

The barley grain was coming off his John Deere combine at 14.2% moisture and will be fed to pigs on the farm’s 300-sow unit producing weaners for fattening.

This year’s harvest start on the Norfolk farm is only one day later than last season’s ultra-early harvest, when some farms in southern England had finished winter barley combining in June.

“We know the crop was under stress from the dry weather so we are okay with the yield  and it has produced a good straw crop for the pigs which will be baled at the weekend,” he added.

Six-row winter barleys needed to be cut when ready as the crop could “neck” and lose heads if combining was delayed, Mr Dennis said.

The late spring rain has helped spring crops on the farm and the sugar beet is looking as well as Mr Dennis can recall in Norfolk.