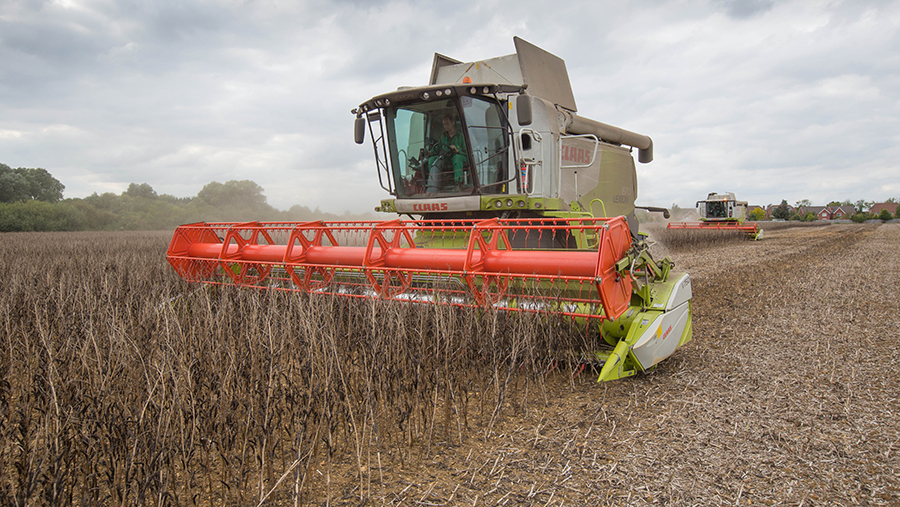 By Melanie Jenkins and Ruth Wills

As harvest wraps up for another year, it’s evident that many farmers are looking to put it behind them and move on to 2021, after dealing with hugely variable yields and quality.

See also: Analysis: How much more wheat will be planted for 2021?

The tail end of the spring barley harvest in Scotland is showing worsening quality after weeks of frustrating weather conditions, according to Robin Barron, general manager at East of Scotland Farmers.

“Though yields have been good, the quality of malting barley has deteriorated as harvest has progressed – with 25-30% of deliveries failing because of pre-germination, compared with virtually none at the beginning of harvest,” he says.

Given the high yields, the store has taken slightly more than expected – but with a few farmers not yet finished, there could be some lower-yielding crops still to come in.

“Overall, yields have average 6.8t/ha, which is huge. We are seeing the advantage of the new varieties Laureate and Diablo, which yield far better than their predecessors such as Concerto,” adds Mr Barron.

Growers have moved on to drilling winter crops into good soil conditions. “Farmers are looking to put in as much winter cropping as they can in response to the frustrating rejections of spring crops, as well as the oversupply of the malting market – it’s probably not a bad thing if the wheat area goes up a little,” he says.

Harvest is also just about over in the north of England, with just a bit of wheat and spring beans to come, according to Dave Young, farm buyer at Grainco.

“Spring crops have been better than predicted, with spring barley and spring oats yielding well. Considering the drought in the spring, the crops were looking atrocious, but they have performed a lot better,” he says.

Specific weights on the wheat have been very high at 78-82kg/hl, despite not yielding well. “Due to the rainfall a couple of weeks ago, hagbergs have dropped to 80-120 seconds, and they need to be more than 150 for biscuits,” adds Mr Young.

Nitrogen contents for malting barley have been OK, but the grain is showing poor germination. “Most grain has been between 1.5-1.7% but we need a germination of 98%, which we are struggling to get due to the weather,” he says.

Moving into southern England, harvest is also almost over, but quality has dropped off, says Izzy Lawrence, store manager at Trinity Grain.

Winter wheat, while starting off brilliantly, was hampered by the wet weather, leading to sprouting and a drop in hagbergs to as low as 62 seconds. “Those who got it in early were really pleased, and that has all been kept separately,” she says

It’s a similar story with spring crops. “It’s a tale of two halves – the start was really promising, but after the spell of wet weather it has really dropped off,” adds Ms Lawrence.

Specific weights in spring barley have been down at 60kg/hl, with nitrogen contents of malting varieties ranging from 1.65% up to 1.9%.

Harvest is done and dusted in East Anglia, with most farmers looking forward to 2021, says Philip Darke, operations director at Camgrain.

“Harvest ranged from appalling with beans to satisfactory with wheat – most farmers see it as a harvest to forget,” he says.

Bean yields were at least 50% down on average. “Some members took less off the field than the seed they put in,” adds Mr Darke.

“With wheat, some were happy with their yields, but others had the worst yields in 20-30 years. It’s about 30% down overall,” he says.

But, on the bright side, it was such a dry harvest, the biggest chunk was done without using much fuel in the grain dryer at all.

Harvest progress also varied hugely depending on area, with members in the East finishing more than a month ago, while those into the Cotswolds and Midlands – who could only plant spring crops – wrapped up as late as a week ago.

“Most members are now drilling and have been for a week. They don’t want to get caught like last year,” he says.