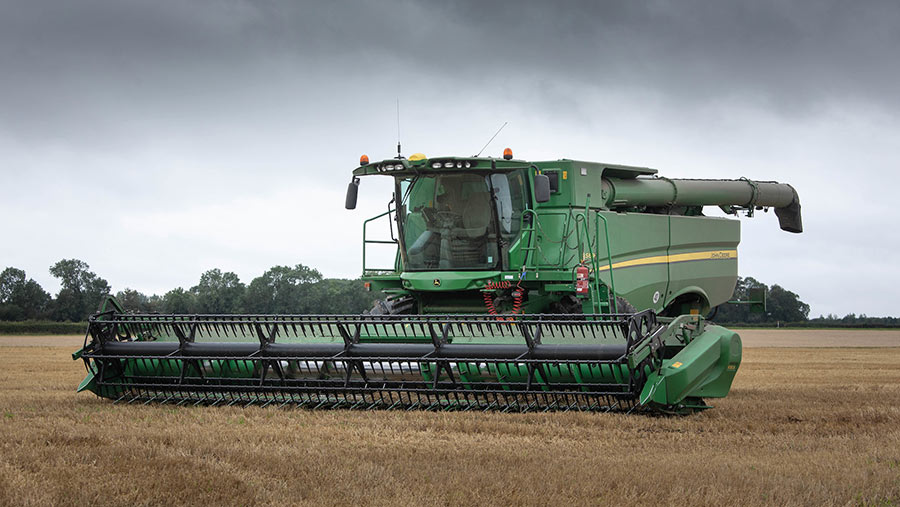 In the South West, spring barley and oats are around 85% gathered, with diminished quality in later cuts, according to Duncan Lyon, store manager at Devon Grain.

Quality at the start of harvest was quite good, but specific weights are now dropping off alarmingly, he says.

See also: How to promote wildlife and have a profitable arable farm

“Winter barley averaged 65kg/hl, but later cuts of spring barley are at 58-59kg/hl with much higher screenings.”

Wheat yields are also down, although earlier cuts achieved good specific weights, up around 77.5kg/hl.

In East Anglia, growers have been subject to very different conditions, according to Andrew Dewing, chief executive at Dewing Grain.

“We have had very little rain in comparison with other areas,” he says. “As a result the bulk of harvest is complete, except in the far north-west of the region which sees rain from Lincolnshire.”

Cereal crops have averaged 12% moisture although yields have been down across the board. “Exceptionally good soils that would achieve 11t/ha of winter wheat are down to 7.75-8t/ha – while average soils are down by around 2t/ha at 7t/ha,” explains Mr Dewing.

Wheat quality has been very good, averaging 78-83kg/hl with Hagbergs of more than 250 seconds.

But winter and spring barley have both averaged 5.5t/ha. “The light land has struggled, but both Craft [winter] and Diablo [spring] have been pleasing,” he adds.

However, high nitrogen contents have affected malting quality, and the tail end of spring barley has been subject to weather damage and pre-germination.

Skinning and pre-germination has also been an issue in later spring barley in the east of Scotland. However, earlier crops were of good malting quality, says Robin Barron, general manager at East of Scotland Farmers. “Specific weights have been in the mid-60s, with low screenings and nitrogen averaging 1.44%.”

The store has taken about 60% of its expected spring barley crop, and yields have been good, averaging 6.9t/ha on early farms. However, catchy weather in the region has seen moisture contents up to 20% across wheat and barley.

Wheat harvest is half-way through, with yields looking encouraging, says Mr Barron. “The wheat is looking good in the field and samples are producing specific weights in the high 70s across a range of winter distilling varieties.”

“Quality to start with was reasonable but it has deteriorated,” he says. “Yields have been disappointing, but some crops performed better than expected.”

Winter wheat yields have ranged from 4t/ha to double figures, depending on drilling date and soil type, with an overall average of 7-8t/ha.

“Earlier milling crops have averaged 78kg/hl with Hagbergs in the high 300s, but later crops are in the low 200s,” he says. “Variable protein contents have resulted in some milling grain downgraded to low-protein milling or feed wheat.”

Planet, Laureate and Propino malting barley produced specific weights in the high 60s, but the wet weather has affected later quality with nitrogen contents fluctuating. “Maltsters are strict on the 1.85% maximum tolerance so the variability in nitrogen has seen some grain not making the grade,” explains Mr Wilcox.

Fuego spring and Tundra winter bean yields have also been varied, although most have been combined at 17-18% moisture and look reasonably well.