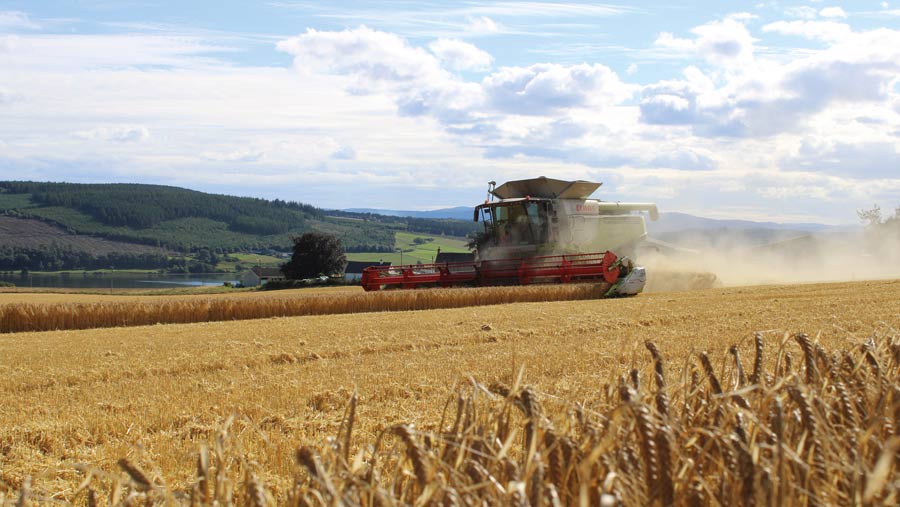 By Melanie Jenkins and Ruth Wills

Harvest is proving to be a gloomy affair for most, with fears growing that crop quality could suffer if the unsettled wet weather continues to delay combines in the coming fortnight.

Wheat harvesting has begun in the Borders and Lothians, but it is too early to tell how it will perform, according to Bruce Ferguson, Scottish general manager at Frontier Agriculture.

“The weather has been very frustrating leading to a stop-start harvest to date, but it’s important we see a settled spell shortly, as the next 10 to 14 days are critical to ensure quality is maintained.”

“Nitrogen is trending reasonably low, well within the distilling range, and screenings and skinning levels on the whole are manageable.

“Early indications would suggest that yields are also looking good, but we have to be cautious with any spring barley predictions as there is still a long way to go and we do require a settled period of weather to allow us to make significant progress,” he adds.

Oilseed rape harvest is 95% complete, with significant variability in yields across the country, ranging from 2.75t/ha to 5.0t/ha.

In the north of England harvest is also proving a stop-start affair, with wheat harvest only just begun, says Dave Young, farm trader at GrainCo.

“Yields are variable, with some very good at 10t/ha, but we have also seen some at 6t/ha. But the specific weights are very high with samples coming in at 82kg/hl and higher – which is helping the yield. However, second wheats look to be yielding well below average.”

Growers are waiting to get into spring barley and oat crops, which aren’t quite ready yet. So far, samples indicate that nitrogen in barley will be at or below the required 1.7%, but the weather isn’t helping, he says.

Oilseed rape has been excellent, with crops yielding 4-5t/ha, says Mr Young. “But there have been very poor crops where areas of fields have been flooded out.

“It’s been such a hard harvest to gauge because of the variability in when crops were drilled.”

Further south, combining has also come to a halt due to wet weather, according to Dan Murphy, laboratory and haulage manager at Woldgrain.

“So far we have had 21,600t, one-third of our total intake. It’s been painfully slow and at this point we would usually expect to be half to two-thirds complete.”

A few growers on top of the Lincolnshire Wolds have reported barley going flat and another storm is forecast. “There’s a lot of spring barley we are expecting to come ready now, but after the storm it might not be in a good condition,” he adds.

The initial indications suggest quality is mixed, with nitrogen contents ranging from 1.6% to 2.2% and specific weights of 58-67kg/hl. “It’s really varied depending on soil type,” said Mr Murphy. “One grower did report Planet yielding 7-7.5t/ha, which he was very happy with. But this could well be the exception rather than the rule.”

Wheat crops have yielded 5-9t/ha – again depending on soil type – but Mr Murphy reported seeing plenty of ergot in wheat and barley crops, which is causing some concern.

In the spring barley hub of Norfolk the picture is fairly similar, but harvest is at least finished more or less, according to Andrew Dewing, managing director at Dewing Grain. “Yields are down significantly across all crops, with the occasional field doing well.”

The quality of malting barley has been impaired, with lots of high nitrogen samples and the later cut crops struggling with germination issues.

“The main thrust was in an OK condition, but it’s a gloomy time for purely malting barley growers.”

Wheat is the most positive crop with quality proving very good, with high Hagbergs, specific weight and proteins, adds Mr Dewing. “The protein levels are the good news, with most in the county easily above 13%.”