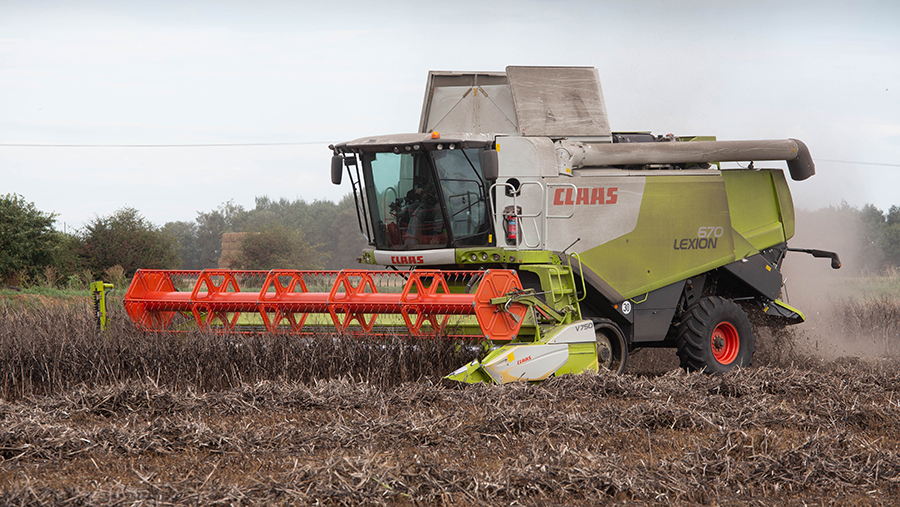 Graham Furey put the combine to bed at Castleview in Killyleagh, County Down, in the week ending 20 September after finishing his 100ha of combinable crops.

“Spring wheat was a first for us this year,” he says. The 20ha of Mulika and Chilham spring feed wheat averaged 5t/ha after drying. Despite a little more discolouration than usual, quality was reasonable, with a specific weight of 76kg/hl.

“We would usually drill 40ha of winter wheat, but ground conditions became impossible so we only managed half the hectarage,” he adds.

His 20ha of early-drilled Graham and later-drilled Zyatt winter wheat averaged 7.4t/ha, with specific weights of 78kg/hl. “It was a welcome relief,” says Mr Furey.

The 30ha of Bazooka and Orwell winter barley averaged 6.2t/ha and ranged from 65 to 70kg/hl, while 15ha of Exsteel oilseed rape yielded a pleasing 4.5t/ha, having escaped the challenges of cabbage stem flea beetle.

Across the water in northern Scotland, Donald Ross has also finished harvest at Rhynie Farm, with some pleasing results.

“Conditions were much better here than in other areas – we’ve heard of problems with skinning and pre-germination further south, but we’ve had good quality overall,” he says.

His Canyon winter oats were successful too, yielding 8.7t/ha, while Aspire oilseed rape came off at 3.7t/ha.

“Considering the year, our 101ha of Vertigo did very well – yielding 4.9t/ha with good quality,” he says.

His most surprising crop was spring barley. “It suffered with the drought and high winds; we also had secondary tillering after the June rains, which affected about 50% of the 134ha of Diablo. We anticipated no more than 5t/ha, but it yielded 7.4t/ha which was remarkable,” he adds.

Gleam winter wheat – of which 101ha was drilled early and 16ha in February – averaged 11t/ha, with specific weights at 82kg/hl.

Mr Manners also trialled 8ha of Parkin, which matched the yield and quality of the Gleam.

Even further south, James Woodroff had a mixed harvest at N Woodroff & Sons, Crowland, with 70ha of Flamingo oilseed rape yielding 2.5-3.7t/ha. “We saw our poorest yields coming from fields flooded out in the autumn,” he says.

Belepi, drilled in the spring, managed a reasonable 5-6.8t/ha, with specific weights at 76-78kg/hl.

Unfortunately, the 202ha of Planet spring barley had heads blown off in the wind, but it still yielded reasonably well at 6.8-7.4t/ha.