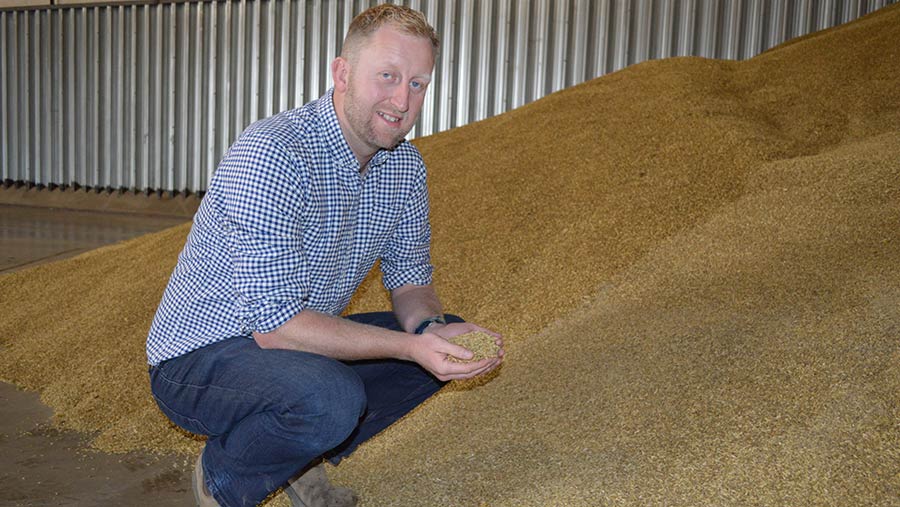 James Fountain is happy with yields of his oilseed rape and winter barley, with the first just topping 4t/ha and the second a better-than-expected 7-7.5t/ha.

The Cambridgeshire grower has cut all his 23ha of oilseed rape with yields “just north of 4t/ha”, with the good yield put down largely to early drilling to allow the crop to escape damage from cabbage stem flea beetles.

He said oilseed rape was now a difficult crop to grow because of the flea beetle threat, but it was still the most profitable combinable break crop on his farm.

“The key is early drilling in the last week of July and some moisture at drilling to get away from the flea beetle threat,” he said.

Oilseed rape followed winter barley and was established using minimum tillage and sown with a combine drill. His 23ha crop was of the hybrid variety Excited.

He has also cut his 52ha of winter barley, but some of the six-row hybrid Kingsbarn lodged and went flat in early June, and all suffered from a lack of summer sunshine.

This caused concern over quality and especially specific weight, but in fact the crop was not as bad as feared, averaging 62kg/hl.

“The harvest was better than expected, especially the specific weight, after some of it went down in early June,” he said.

He and his family farm 450ha of arable land as CJ Fountain & Son, at Delavals Farm, near Whittlesey, just east of Peterborough, on a range of soils from fertile black fenland to silty clay loams.

Mr Fountain is set to start on his winter wheat at the end of the week. He grows Saki, Firefly, Elation and Extase, with some wheat grown for the breakfast cereal maker Weetabix.

Medium-term wheat yields tend to average about 9t/ha and this year’s crop looks good, but he is a little concerned whether specific weights will be a touch low, like the winter barley.

Andrew Hill, national origination manager at grain trader Frontier, expects the national wheat crop to return to more “normal” levels of 14.5-15m tonnes after the much lower 9.7m tonnes in 2020.

“We expect a more normal wheat harvest with average yields, but we won’t get a good idea on quality until the second week in August,” he said.

The big unknown was whether the low grain nitrogen and low specific weights seen in winter barley crops would extend to wheat crops, he said. On the winter barleys there was a regional divide, with yields and quality of crops in northern England fairing better than crops further south.

The 2020 wheat harvest at 9.7m tonnes was the smallest crop since 1981 due to a lower area and poor yields, while some planned wheat area was switched into spring barley, pushing the 2020 barley harvest to 8.1m tonnes, the largest since 1997.