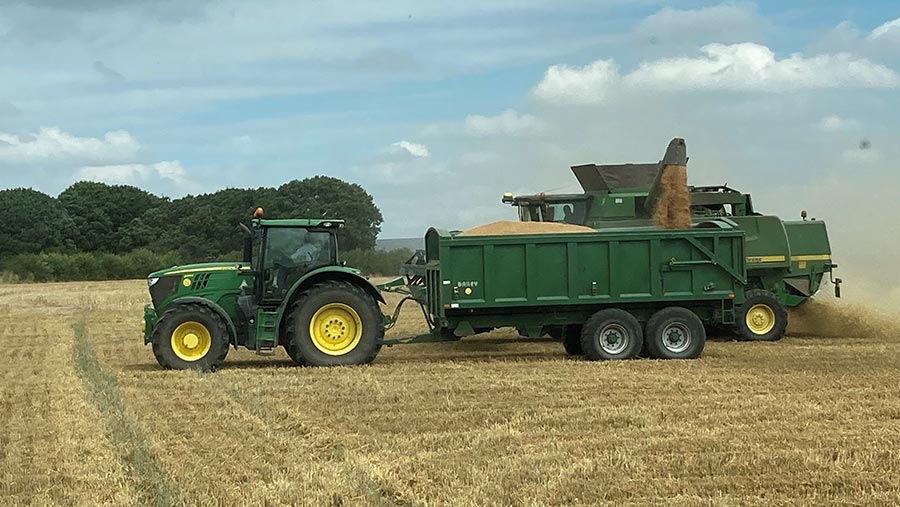 Moisture was coming in at 15-16% using his John Deere CTS combine, where 40ha out of 260ha of wheat have been cut so far.

“Harvest has been very stop-start with all the rain showers, so we’re hoping this week we can really get going into the wheat, where initial yields have been fairly average”, said Mr Fisher.

Moving towards a regenerative agriculture approach, Mr Fisher direct-drills all of his combinable crops, plants covers before spring crops (which are grazed by a neighbour’s sheep) and is now slowly trying to cut back on inputs.

A maximum total of 185kg/ha liquid N is applied to wheat, along with a carbon source, with reduced rates on crops following beans or where manure is used within the rotation.

Fungicide applications are also being scrutinised, with each of the three varieties he grows – Extase, Siskin and Skyfall – receiving tailored fungicide programmes.

“Extase remained clean throughout the season, enabling us to cut a T0, only applying tebuconazole and half-rate prothioconazole later down the line,” he said.

Slightly higher rates were used on Siskin, while Skyfall experienced a particularly challenging season, with an extra treatment of SDHI and prothioconazole required to tackle an influx of yellow rust and then late septoria pressure.

Harvest of Mr Fisher’s 47ha oilseed rape area is now complete. Early drilled crops yielded well at 4t/ha, which was significantly better than those drilled at the beginning of September.

“The wet winter and late frosts really hampered the crop, which brought average yields of the variety Aspire down to 2.9t/ha,” he explained.

“We’re making the most out of the mixed weather to get crops in the ground while there is moisture available,” he concluded.