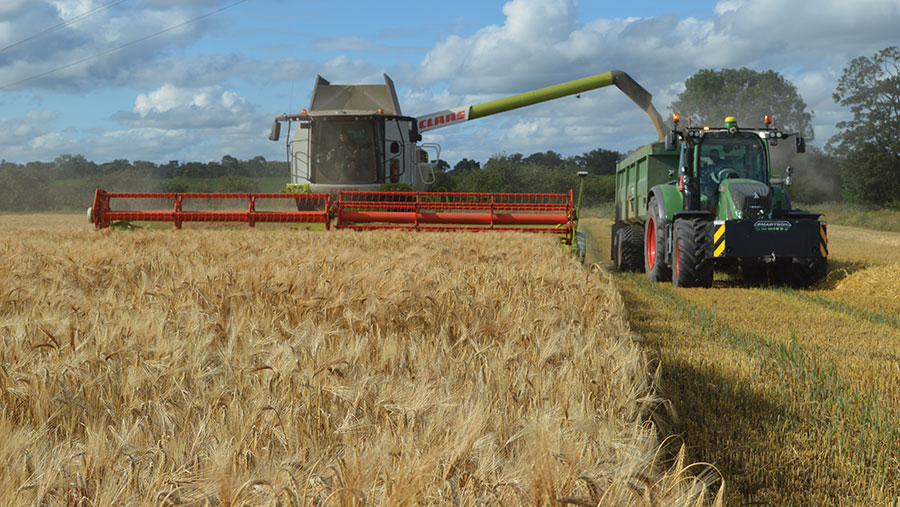 Good early yields of winter barley are being reported across southern England, with generally good grain quality ahead of an intensifying heatwave sweeping the country.

Cambridgeshire grower James Peck reports winter barley yields above budget after bringing his autumn drilling dates forward and applying nitrogen fertiliser earlier in the year together with an inhibitor to anticipate the spring drought.

His average yield for his six-row hybrid mainstay variety, Belfry, is 9.3t/ha with a top yield of 10.04t/ha and a low of 8.82t/ha. He expects to finish cutting his 1,069ha of winter barley by the end of this week.

“We had budgeted for 9t/ha and are averaging 9.3t/ha, and we are bringing in about 1,000t/day,” he tells Farmers Weekly from his base at Scotland Farm, Dry Drayton, some four miles west of Cambridge.

See also: Earliest ever barley cut for farms as harvest picks up pace

He puts the good result down to drilling his winter barley about three weeks earlier, from 6-20 September, to get the crop off to a good start through the autumn and winter, although this does compromise blackgrass control on his generally heavy land.

The moisture levels at the start of harvesting were 15-17% and he was having to run grain through the grain dryer, but levels came down to 13.2% this week. Straw yields are also up at 6.9 big bales/ha against a budget of 6/ha to supply local power stations.

In a relatively dry area of Cambridgeshire with an average rainfall of 550mm, Mr Peck is moving towards more autumn drilling, with spring beans being replaced by winter beans and spring oats abandoned in favour of winter varieties across the near-5,000ha he farms.

With a pattern of dry springs continuing, his only spring crop next season is likely to be 360ha of spring-sown mustard.

“For the winter crops, early drilling helps them cope with the weather a lot better, although it does compromise blackgrass control,” he says.

His oilseed rape is also look promising, with the hybrid variety Ambassador yielding 3.93t/ha. This comes after a gap in oilseed rape growing on many of his fields, so the crops is gaining from a wider rotation.

Good to average yields are also being reported from one big Suffolk Breckland estate that had finished cutting 212ha of a seed crop of Kingsbarn six-row hybrid winter barley earlier this week.

The variety averaged 5-5.5t/ha, which is considered good on the light, blow-away sandy soils of the 4,200ha Euston Estate, just south of Thetford.

As it is a seed crop, it was not pushed very hard, with low seed rates and low nitrogen fertiliser levels used to give an even grain sample for the seed trade.

Farm manager Matthew Hawthorne says the crop had suffered in the very dry April and May, but the grain quality was good, and he now expects to start on winter wheats next week.

Some early harvesting areas such as the Hampshire coast have had a bit more rain this season to keep crops growing a little longer, such as on the farm Martin Button manages on the edge of the New Forest.

In 2018, he started harvesting 44ha of Tower winter barley on 27 June, the earliest in living memory. It came in with a respectable yield of 6-7t/ha for such a dry year, with the winter barley harvest finished during June for the first time.

This year there has been a little more moisture around and this week he started cutting 48ha of seed crops of two-row barleys Tardis and Orwell. They are ripening more traditionally than when crops died on their feet as in 2018 on the 1,600ha Bisterne Farms estate, just south of Ringwood. 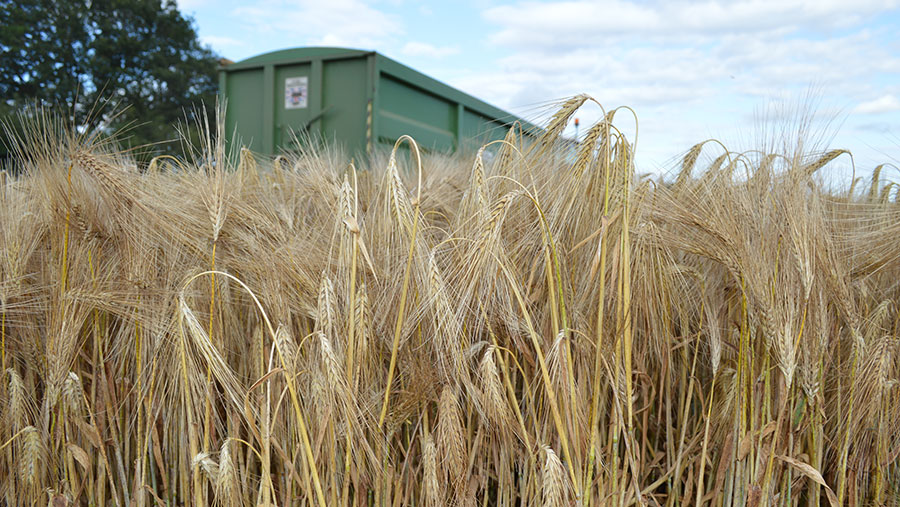 Further west, farm manager Martin Ford in Dorset has seen good yields and quality from 200ha of the old specialist malting variety Maris Otter, with a yield of 6.5t/ha and good quality, with grain nitrogen below the 1.6% demanded by the malting buyers.

He was pleased with the yield at Charborough Park, between Blandford Forum and Wareham, as his five-year average for Otter is close to 6t/ha, but he was glad that he had cut his crop early – from 4-10 July –  with hotter weather on the way.

“We have gone weeks with no rain, so we are glad we are in an early area,” he says. Specific weights on the Otter started at 74kg/hl and had slipped at the end of harvest to 70kg/hl.

The winter wheats and spring barleys are starting to die back in patches on the estate, and he just started on the oilseed rape earlier this week, with moisture levels down as low as 8%.

Harvesting conditions are now getting too dry and growers with grain below 12% moisture are looking to avoid cutting in the heat of the day. He says the dry weather could take the edge off crops while the current hot temperatures are likely to hit the spring barleys.

“The crops look good. They are certainly not a letdown, but there are unlikely to be any record yields,” he says.

The winter barley area is estimated to be 10% higher at 447,000ha for harvest 2022, showing a second successive seasonal rise in area for the crop. The overall UK barley area is down due to the fall in plantings of spring barley earlier this year.

Many areas of the UK, including eastern England, the East Midlands and West Midlands, saw increases in the area of winter barley, according to the AHDB’s Planting and Variety Survey issued earlier this month. This may reflect that the run of dry springs is encouraging barley growers to plant in the autumn rather than the spring.

The winter barley area has risen for the past two seasons, while the spring area has fallen since harvest 2020, emphasising this may be a growing trend.

Production of winter barley rose for harvest 2021 by 43% to 2.7m tonnes, which is likely to increase further with the bigger area for harvest 2022. Meanwhile, spring barley production fell 32% to 4.2m tonnes in the same year, according to Defra figures.

The UK wheat area for harvest 2022 is estimated to have increased by 1% year-on-year to 1.807m hectares. This has been at the expense of spring barley and oats, which are both down on the year, the AHDB survey reported.