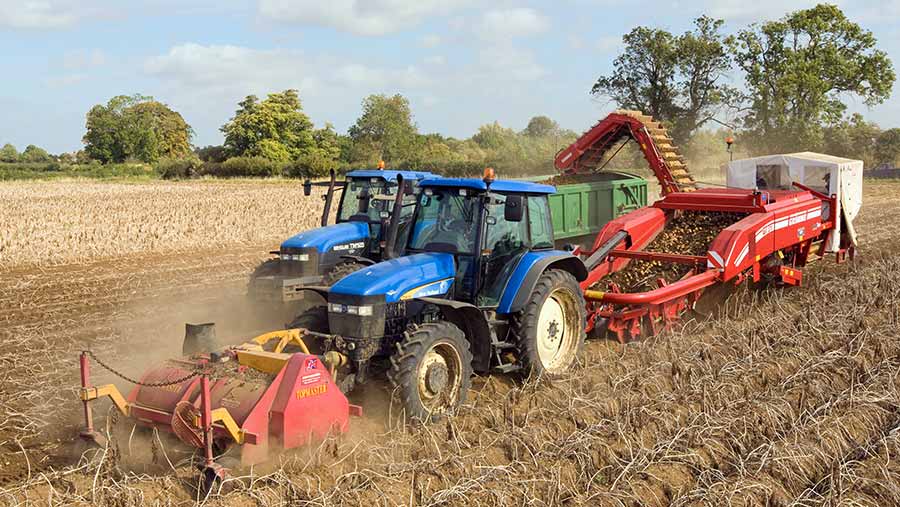 The eating potato crop is forecast to be nearly 20% smaller than last year in north-west Europe because of the summer drought, with tuber size and quality also suffering.

Some farmers face the challenge of meeting contract tonnages while others are set to benefit from a stronger free trade price.

The North-western European Potato Growers (NEPG) association estimates that crop yields in the Netherlands, Belgium, France, Germany and the UK will be 8% below the five-year average.

Extreme drought and high temperatures that occurred across north-west Europe have kept average yields to around 40t/ha, although un-irrigated crops have suffered more, struggling to reach 30t/ha.

The end result is a much smaller predicted potato crop of 23.5-24m tonnes, despite an 8.4% overall increase in the potato area across the five key producing countries.

Potato quality has also been badly affected, with farmers in all countries seeing abnormal secondary growth with reports of sprouting in the furrow, and there are questions over how they will store in the coming months.

The average dry matter content, which was initially on the high side, will decrease as a result of the increased rate of abnormal shoot and tuber formation.

Consequently, some European processors have already lowered their supply standards, and there are reports that table potatoes and/or starchy potatoes are finding their way into processing lines.

Looking specifically at Great Britain, the late spring also had an impact, as unlike continental Europe, the GB potato area is 3% smaller, according to the latest AHDB planting figures.

AHDB says this makes it the third-lowest planted area on record and the shortfall in expected supplies is likely to lead to a similar situation to that on the continent. 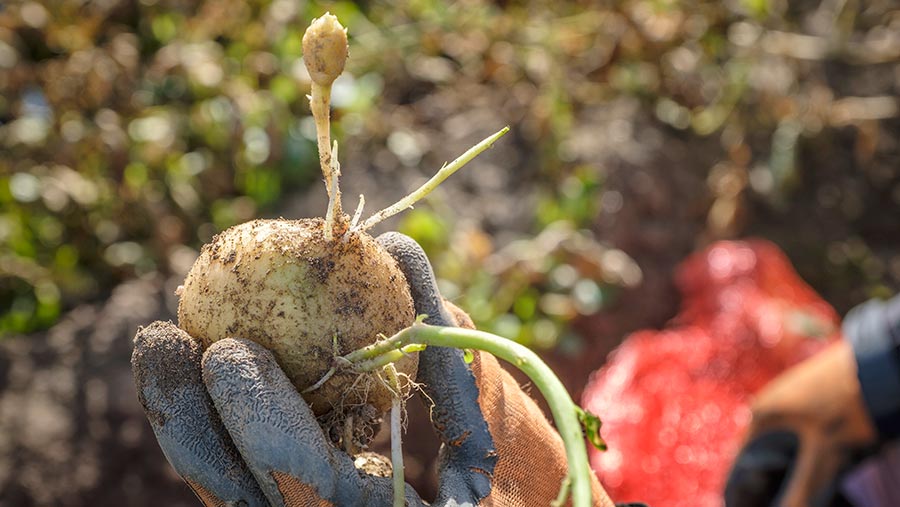 “Essentially, increased competition for free-buy supplies will strengthen free trade prices, which is unlikely to be capped by an influx of competitively priced imports,” it says.

Three UK farmers on the potato harvest so far

Patrick McCloy is set to start lifting his 100ha of potatoes soon at Byham Park, Knottingley in West Yorkshire.

The farm grows Innovator and Royal on a contract for McCain, as well as Arsenal for Cockerill’s in Scarborough.

“We’re pretty lucky to be able to irrigate, but we know for sure yields will be less,” Mr McCloy says.

Farmers in the area have had conflicting ideas over irrigation, but Mr McCloy has found a system which worked for him – applying 2.5cm of water per week. 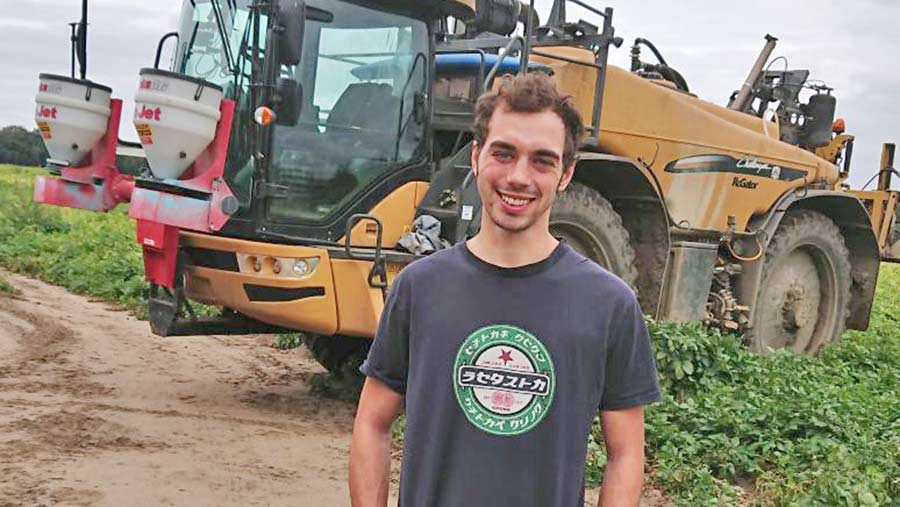 “A company called Agri Tech came to test soil with a neutron probe. It revealed that water usage on the Royals had almost stopped and the Arsenal potatoes were near enough dead,” he recalls.

He has further concerns over the quality of the crop, with some tubers cracking and turning green.

“There is still potential left in the crops, however most of them have packed up. I heard that a potato plant will completely shut down if temperatures are 27C or above and we’ve had a few of those days.”

However, he was positive about the storability of the crops.

“There’s no blight or disease – so they will be good to store, but it is dependent on the temperatures when we store them.”

Over in Norfolk, Tim Papworth contract farms 230ha of potatoes at Lodge Farm in North Walsham.

By early September he had lifted 60ha, but the yield performance of early chipping varieties is down 20% on last year while salads are down 10%.

“They’re a lot smaller and there aren’t as many there,” he says.

Normally, he expects the early chipping potatoes to yield 44t/ha. This year they have yielded 29t/ha.

Mr Papworth grows for a range of markets: chipping, crisping, salads and processing, with varieties including Charlotte, Bambino and Daisy. 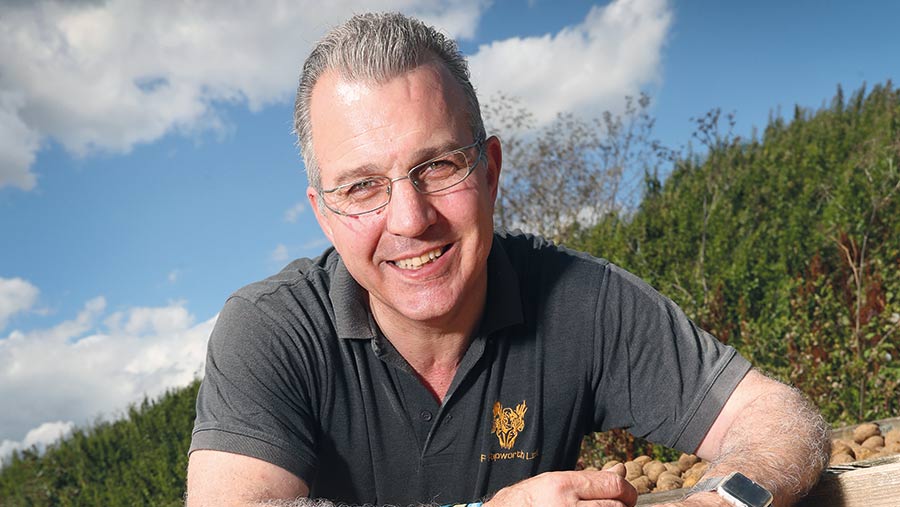 Although yields are not up to his usual level, he is pleased with how his salad varieties have performed in the heat.

“They’re in the ground for a shorter period than other varieties so withstood the dry and the heat. They are a little scabbier this year and smaller, but the advantage of salads is that they’re small.”

Although Mr Papworth was able to fully irrigate the salad potatoes, water supply has been a huge concern.

A water abstraction restriction meant he couldn’t irrigate all the potatoes as usual and he has concerns over the future.

“If we can’t irrigate our potatoes – which are made up of 80% water – we won’t be able to grow them, and then we will end up importing them from abroad,” he says.

The prolonged period of dry, hot weather had caused different problems for the chipping potatoes.

“Where the soil has cracked, the sunlight got through and the potatoes are green,” explains Mr Papworth.

“Last year was a good year – with a bumper crop – and this year is completely different.”

In Ilminster, Somerset, early indications are that, as expected, the irrigated potatoes are faring better than the unirrigated.

“It’s not an easy picture at the moment,” says Ollie Blackburn, farm manager at Dillington Farms.

He has grown 80ha of Marfona, Estima, Electra, Melody, Georgina, Sapphire, Laura and Lanorma on the 1,000ha estate for Branston, which go to Tesco.

He was able to irrigate these, but the farm has a further 40ha which is unirrigated. 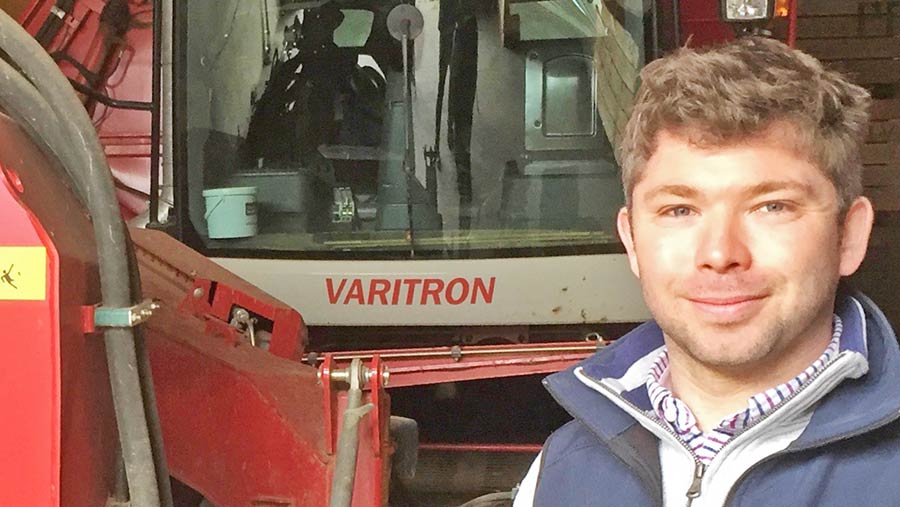 He begun lifting in early September and in terms of quality it has not been too bad so far, but he has concerns over the rest of the crop.

While it was not a case of battling with mud like last season, this season has brought its own problems.

“We’ve had to consider how to lift the potatoes gently without bruising them due to the lack of soil moisture,” Mr Blackburn says.

View from the continent

He has 45ha of Challenger, Fontane and Markies potatoes which he estimates will yield 30t/ha at the most.

Irrigation is not possible, and there has been almost no rain for five months.

The farm has a tonnage contract with German potato buyer Weuthen and this normally accounts for about 60% of the crop, assuming an average yield of 50t/ha. The rest is sold on the free-buy market.

But with such low yields, Mr Püllen can only just fulfil the contractual portion, and therefore, will not benefit from the high market price.

The quality looks good, though, with no abnormal shoot or tuber formation and no defects in the flesh.

Jarco Koekkoek desiccated his crop in mid-September, having opted not to delay his harvest to allow tubers to bulk up.

He wanted to prevent abnormal shoot and tuber formation to maintain quality.

The 12ha crop of Melody ware potatoes were planted in mid-May, as April was wet, and the crop emerged easily and evenly. He irrigates his crop seven times during the summer.

About three weeks before desiccation, he treated the crop with maleic hydrazide, which he does as standard to help maintain potato quality while in storage. 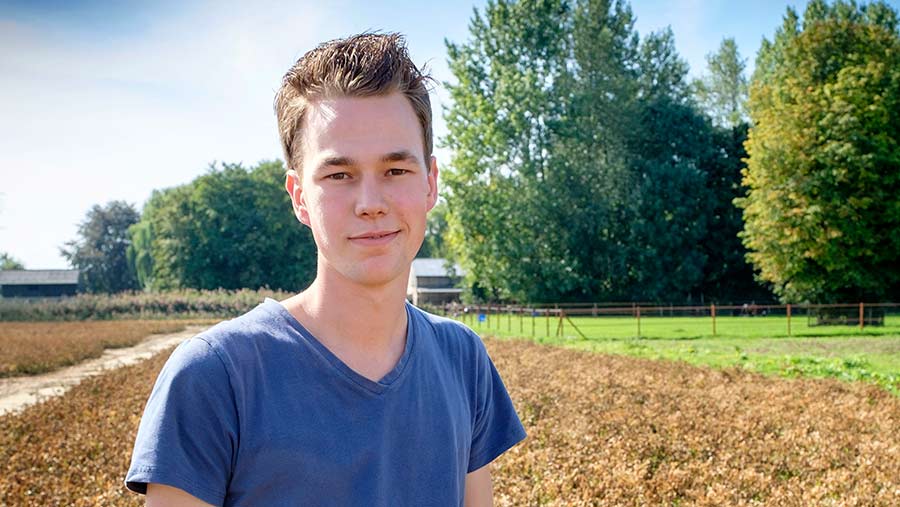 This season, the spray should also help to prevent abnormal shoot and tuber formation.

“It might have been possible to grow a few more tonnes, but with the current price, I don’t want to run any risk of losing quality,” he says.

Mr Koekkoek estimates that he now has a net yield of about 45t/ha, lower than the 50-55t/ha in an average year.

Thomas Huyghe grows 50ha of potatoes on his farm in Northern France, in a rotation that also includes sugar beet, cereals and oilseed rape.

He expects his 35ha of Fontane potatoes to yield about 45t/ha. The unirrigated crop has had only about 100mm of rain since planting.

“This is virgin soil – I have never grown potatoes on here before,” he says. “Last year, I produced 250t of Fontane at 50t/ha.”

Mr Huyghe believes it is still too early to judge how the 2018 potato year will pan out for him, but one positive is the price.

Of his 35ha of Fontane and 15ha of Challenger, he is growing 30t/ha under contract.

“This means that if prices are good, I will still have a surplus to sell on the free-buy market this year.

“Sure, they will be undersized yields, but that will be partly compensated for by the good price for the proportion I intend to sell on the free-buy market.”