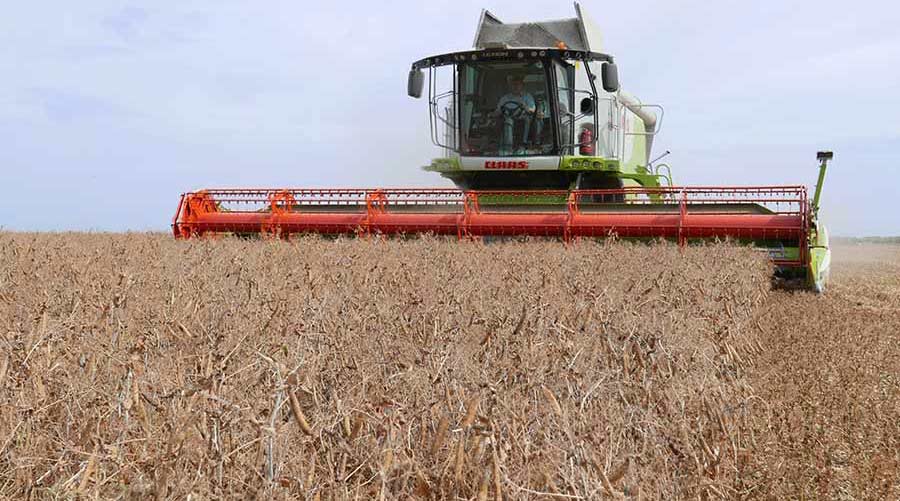 Lincolnshire Wolds grower Tim Lamyman has broken the world pea yield record for the second time in three years with a yield of nearly 7.5t/ha, with well-targeted crop nutrition the key to his success.

The combine pea crop was nearly 2m tall in some places, This large biomass translated into a bumper harvest and Mr Lamyman was delighted with the yield and quality.

Both crops were of the blue pea variety Stallion from breeder Limagrain. This has been grown for the past three years at his 600ha farm at Worlaby, some 30 miles east of Lincoln, for its high yield and good standing ability. Even in the difficult season of 2018, the variety yielded 5.6t/ha at 14.76% moisture.

“Who would have thought that 2019 would be the year for a world record crop? I am absolutely thrilled with the final performance of the peas as they have shown a consistency in biomass through the season – much more so than last year,” says Mr Lamyman.

The pea crop followed a second winter wheat crop in a seven-year rotation, and was grown on a grade 2 chalky loam that allowed for a well-structured root system and so enabled easier nutrient uptake.

In the dry spring, Mr Lamyman adapted his cultivations to an intensive min-tillage approach to create a level seed-bed, and the crop was drilled on 9 April at 100mm row widths, to give a population of 85 plants/sq m.

Foliar applications were similar to those used in 2018, such as liquid fertilisers containing phosphates and potassium, and a range of micro nutrients such as boron and molybdenum.

With the weather being very changeable in late August, he decided to apply the desiccant diquat (Reglone) on 23 August, in case of a delay to harvest.

Chris Guest, head of seed at merchants ADM Agriculture, says that looking at a feed-quality pea price of £180/t ex-farm, this would give Mr Lamyman’s crop a gross margin of £915/ha, while if the crop was suitable for low-grade human consumption at a price of £235-240/t, the gross margin would rise to £1,401/ha.

“It’s worth noting that this is the highest gross margin achievable for any crop this season,” says Mr Guest.