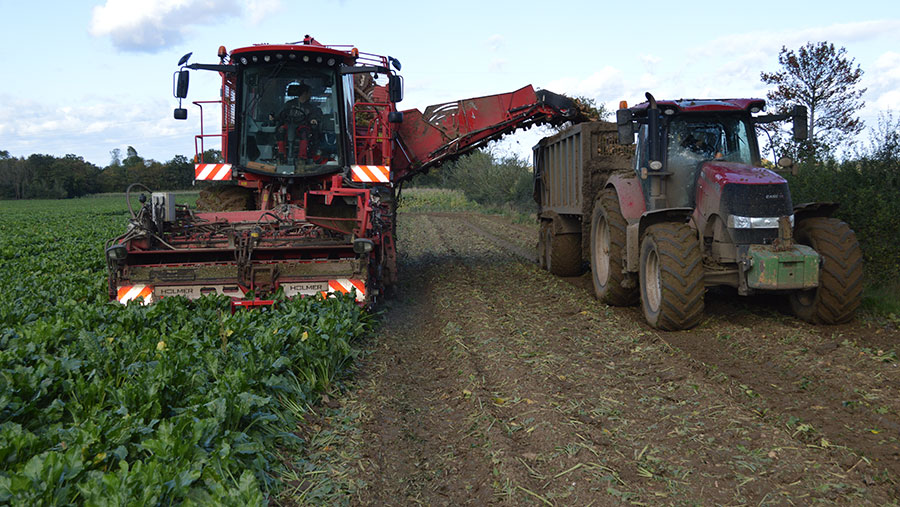 Early yields from the sugar beet harvest are higher than expected after a tricky growing season hit by a spring drought and aphid-spread virus yellows disease.

One Suffolk farm was seeing initial yields close to its five-year average, although sugar content was generally low, reflecting dull weather in July and August.

Simon Eddell, farm manager at Rougham Estate, says early yields from the start of harvest this week showed yields of 75-80t/ha, compared with the farm’s medium-term average of 80t/ha.

“There seems to be some big roots on our heavier soils, as crops held up through the summer, and root yields are there, although sugar levels are down at about 16%,” he tells Farmers Weekly.

This is an encouraging start, as British Sugar is forecasting that national yields will be down 10-15% after the early-season drought and high numbers of disease-carrying aphids moving into crops.

Mr Eddell is growing 130ha of sugar beet on the estate, which has 1,100ha of arable cropping, just east of Bury St Edmunds. He also grows winter wheat, winter and spring barley and oilseed rape.

The use of manures, cover crops and grazing livestock has helped lift the inherently low organic matter of his sandy land, resulting in more resilient soils that are better able to grow crops such as sugar beet in dry summers, he says.

Fellow sugar beet grower and contractor Andrew Flatt started lifting the crop at Rougham this week with his six-row Holmer T430 harvester, and was generally optimistic about yields.

He has contract-lifted some 200ha of beet this season, out of his total of 1,850ha for some 25 customers in the Bury St Edmunds factory area, and can lift about 20ha/day.

“It is early in the season, but from what we have seen so far, yields are very good, with good-sized beet and less virus yellows than expected,” he says. 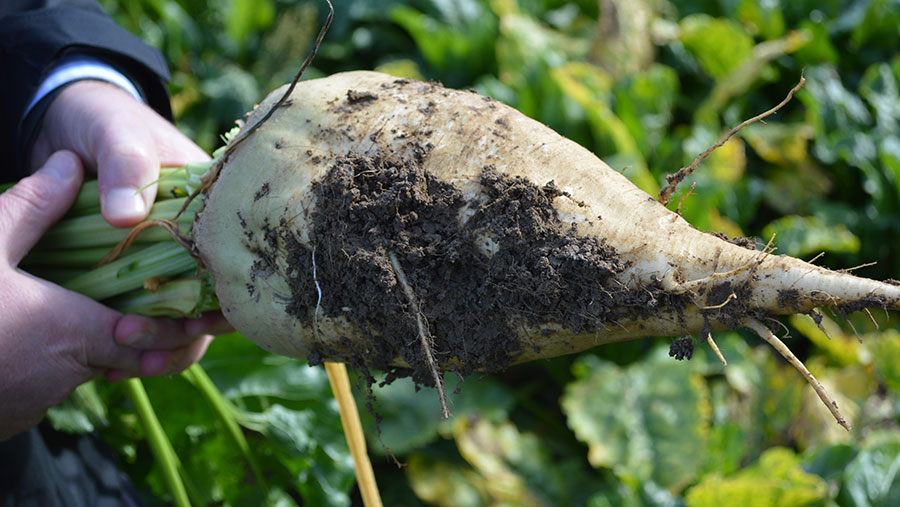 Nick Morris, head of central agriculture for British Sugar, is forecasting yields will be down. This is mostly being attributed to the spring drought, as it reduced plant populations across much of the 103,000ha of beet being grown by 3,000-plus farmers.

“We are expecting yields to be down 10-15% this harvest from the five-year national average of 75t/ha,” he says.

Mr Morris adds that sugar contents have been lower than usual from early liftings, with an average of 16.2% from all beet lifted, when normally levels would be close to 17%.

“Sugar content is likely to climb and hit a plateau in mid-November,” he says. Last season, the average sugar content nationally was about 17.5%.

Virus yellows started to spread in crops through May and June, carried by the peach potato aphid (Myzus persicae). Mr Morris says about one-quarter to one-third of beet crops are infected.

Neonicotinoid seed dressings, which had given effective control of the disease since the early 1990s, were banned for the 2019 crop and the subsequent 2020 season due to their perceived harm to bees.

The lack of seed dressings, combined with a mild winter and the presence of crops such as fodder beet, on which the aphids can overwinter, caused a big upsurge in aphid numbers this spring.

Of the four British Sugar factory areas, Wissington in west Norfolk and Newark in Nottinghamshire have seen more virus yellows, with the Cantley factory in east Norfolk the least affected, although the reasons for this regional difference are unclear.

Currently, growers have a choice of three insecticides and four spray timings to control the aphids – one of flonicamid (Teppeki) and then two sprays of thiacloprid (Biscaya) and one of acetamiprid (InSyst or Gazelle)

Mr Eddell has used two sprays to keep the aphids at bay on his crops, and although there were some signs of virus yellows, it did not seem to have had a big effect on early yields.

For next year, sugar beet growers will be able to fix the price for some of their crop, starting at a base price of £20.30/t, and receive compensation if it is affected by virus yellows disease.