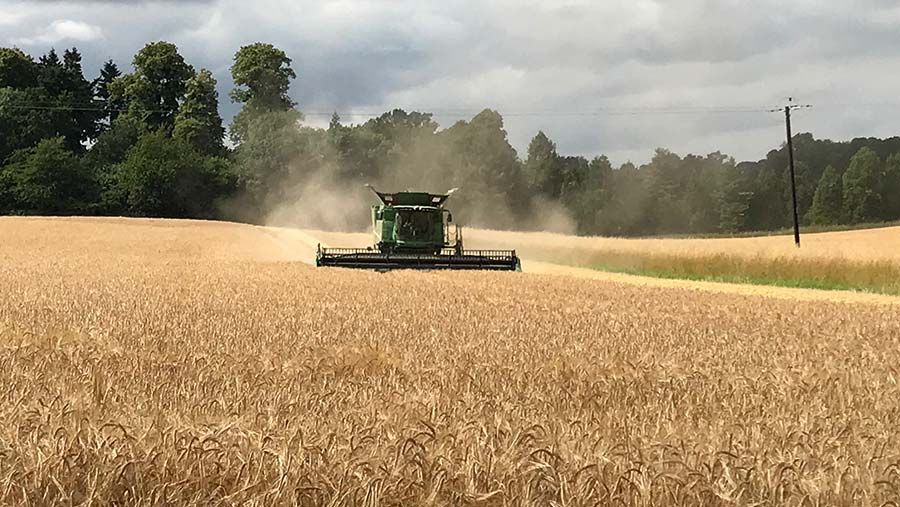 Cutting of the 35ha specialist variety began on Wednesday with yields of 6.0-6.5t/ha. Grain quality is also good, with a specific weight of 68-69kg/hl and moisture at 14.5%.

“Although yields are down from last year, we are pleased so far, considering crops were hit by the spring drought and this is a second Maris Otter crop, which is unusual for the variety,” he told Farmers Weekly.

The sought-after older variety is grown on contract for the independent grain trader Robin Appel, where it will be sold next week.

Watch the full video report below.

The use of the farm’s new Yara N-sensor has enhanced grain quality on the 250ha farm, on the south-western edge of Winchester, by cutting nitrogen rates from 140kg/ha to 100kg/ha. This has reduced the lodging risk.

Next on the harvest to-do list will be the farm’s oilseed rape, which will be ready in 10 days’ time.

Nearby grower Craig Livingstone, farm manager of the Lockerley Estate at East Tytherley, has finished cutting his 42ha of Craft malting barley, after starting on Monday.

With a grain nitrogen content of 1.45%, a specific weight of 68kg/hl and moisture at 13.5%, the crop has made malting quality, and by yielding 8.3t/ha, has outperformed Mr Livingstone’s expectations.

“Next will be oilseed rape, which looks a little beaten up. I’m chuffed that we haven’t lost anything to flea beetle though.”