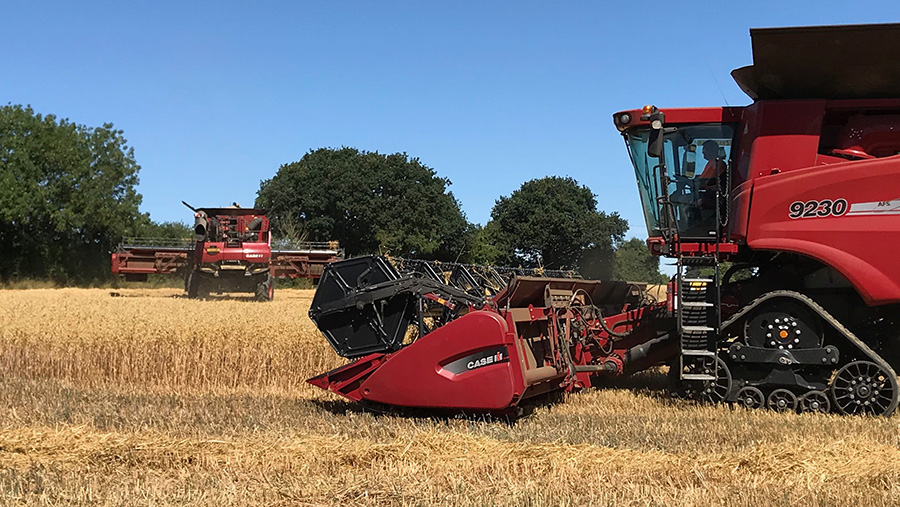 Delayed drilling due to the wet spring and an early harvest have combined to take their toll on both the yield and quality of one Essex grower’s 480ha of spring crops this season.

Yields of Tom Bradshaw’s spring malting barley and spring oats are down a third on the farm’s average, with spring barley yielding 4.5-4.6t/ha, compared with the average of 6.5t/ha.

With the barley at 14.5% moisture it has only just become fit for combining at Fletchers Farm, near Colchester, Essex.

Early indications on the variety Planet show a specific weight of 65kg/hl and grain nitrogen of 1.85%-1.95%.

See also: Harvest 2018: Spring barley yields predicted to be down by 40%

“We have done 91ha of spring barley so far, but moved into beans as the barley is only just about there. The quality is what I am most concerned about; it looks to be borderline but it should make the grade,” said Mr Bradshaw.

Watch the video below for the full report.

Mr Bradshaw’s barley is destined for a local brewer, with the crop being grown in fields neighbouring the maltster that is due to take the grain.

His spring oats won’t be travelling far either, having been grown for a horse feed factory opposite one of the farms.

Yields of both Canyon and Elyann varieties are down 35% on the average, at 4.65t/ha, but have met Mr Bradshaw’s somewhat lowered expectations.

“All the factory does is roll the oats so it buys on appearance. We have a nice bright sample, so hopefully the quality will be OK,” he said.

“Harvest has been incredibly easy, but with the spring crops only having 90 of their usual 120-day growing season the question is what will the quality be, and what end market will they go to?”

Mr Bradshaw is confident that there will be a market for the crops even if it is not the one they were originally intended for.

As NFU combinable crops chairman, he is also conscious of the pressure on arable farmers to bale as much straw as possible this season to meet the needs of livestock farmers, and believes a large proportion are doing so.

All of the straw on his farm has been baled and sold for £25/t, with lorryloads being taken as far away as Northern Ireland.

“It was a price that was worthwhile to do it. I think there is definitely a feeling of responsibility towards livestock farmers, but where there are problems with blackgrass it’s not always possible to bale,” he said.

If the weather holds, Mr Bradshaw expects to be completed by Monday (6 August), well ahead of his usual mid-August finish.