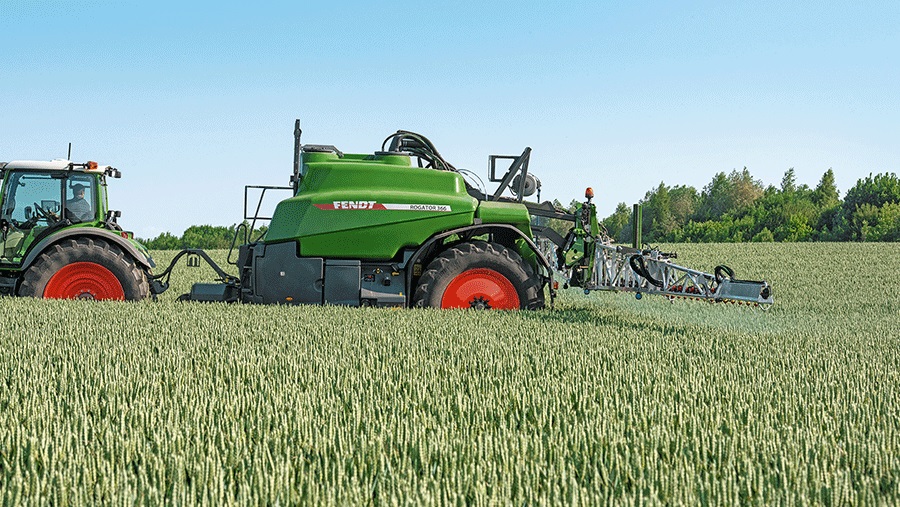 Precision farming is enabling farmers to meet the weed challenges that the industry faces – but having the right software to tie-in precision tools can significantly enhance the process.

Blackgrass is a major problem for many farmers – reduced herbicide efficacy and tighter restrictions mean they are constantly fighting a tough battle to keep weeds under control.

Carefully planning how to fight can make all the difference – which is where precision farming software can play a major role.

David Brightman is one producer who has been applying a number of techniques on his farm to beat blackgrass, with which he has struggled for many years on his heavy clay soil.

Farming 240ha in a joint venture at Gaydon Hill Farm, south Warwickshire, Mr Brightman has become involved with the Blackgrass Resistance Initiative (BGRI) as well as AHDB Monitor Farms in his efforts to stifle the weed.

As part of the BGRI programme, Mr Brightman had blackgrass on the farm mapped manually, and then fed the information into his computer software, Gatekeeper.

Using its mapping feature, he can then measure the density of blackgrass in his fields.

Gatekeeper allows him to plan how to tackle the weed burden head on, while also managing costs, records and compliance, leading to improved performance.

Whether a farm is small scale or part of a large estate, the software can be utilised for specific situations.

With the mapping module, Mr Brightman can input field data and boundaries, building up a year-on-year picture of control methods and their effectiveness, whether this is ploughing, products or spring crops.

Growers using the precision module of Gatekeeper can also make spot treatments to crops, so only specific areas are targeted to save on inputs – which has both cost and environmental benefits.

At the end of harvest, farmers can then produce yield maps to assess performance and costings.

Synching seamlessly with guidance systems, Gatekeeper allows for automated record keeping, with data being pulled straight from the tractor onto the computer.

The field search option lets Mr Brightman easily pick out which fields have had certain products or techniques applied – saving on time trawling through hardcopy notes or diary entries.

He can also save diary notes for each field, which can help when comparing different control options on farm.

This makes it easy to record observations on what has happened and how effective a particular technique has been, from varying chemical applications to different seed and fertiliser rates.

Tying into his use of field maps, Mr Brightman uses the software to check records and apply variable seed rates, specifically to target the most densely populated areas of blackgrass.

There is a limit to how much you can vary seed rates successfully, but I think this does help,” he says.

Like many farmers, Mr Brightman has been using everything in the arsenal against blackgrass, from pre-emergence to post emergence sprays and a range of other herbicides.

Gatekeeper helps him to identify what works best.

As he can record all the data on a field or crop, using crop sequencing he can then see how it has performed, compare it to other fields and make decisions based on this evidence as to what future techniques and inputs to apply.

With changing regulations on herbicide use – from product type to quantities and other restrictions – the Sentinel Active module of Gatekeeper is the one-stop tool for all crop protection products available in the UK.

Farmers simply access the module to search for a specific product and find out the information and verification around it, or they can input the task they would like to complete and get product recommendations.

Growers can also work with their agronomist to allow for seamless transfer of information.

Connecting the grower and agronomist versions of Gatekeeper allows for easy and simple access to data by both parties.

At the end of the year, farmers can assess what they have spent on particular inputs and then work out costs and profits using yield mapping, which creates a margin across the field.

This enables them to keep their costs in line with production and plan for effective future blackgrass control.

Mr Brightman yield maps all his crops and working with the AHDB Monitor Farm programme he has been able to compare the effectiveness of different blackgrass trials.

Last year, he drilled eight 1ha plots of spring barley on his farm, looking at the impact of different cultivation techniques on blackgrass.

All plots were disced again with the Carrier in spring before drilling with a Horsch tined drill.

Unfortunately, the trials were inhibited by a difficult growing season so did not give conclusive results, but blackgrass did appear to be less where fields were ploughed – although yields were unaffected.

“These were essentially tramline trials and Gatekeeper meant we could get an average yield on each plot – it would have been difficult to get this data otherwise.”

The plots have been re-ploughed for spring beans and Mr Brightman is interested to see if they have brought the blackgrass seeds back to the surface. “We learnt that if you are going to plough to control blackgrass, it needs to be in the right conditions with the right attention and equipment.”

One obstacle Mr Brightman has been able to overcome with Gatekeeper is synching his soil mapping with his seed rate maps – enabling him to target seed rates depending on the likelihood of higher blackgrass density. “I think this has really helped with tackling blackgrass.”

Blackgrass facts and figures from AHDB