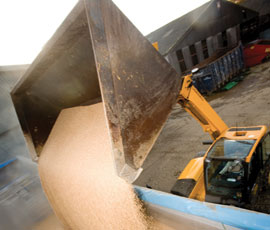 Grain markets have eased back again over the past week, amid further fund sales and general lack of interest.

London wheat futures dropped by £8.50/t in the week to Tuesday (8 March), putting ex-farm feed wheat at about £187/t for spot movement.

“The market has just run out of steam,” says Simon Ingle at Openfield. “We’re seeing long liquidation, lack of demand on old crop, and reasonable cover in the short term. We’re not going to feel the edge of the tight supply in the UK and Europe until May or June, and the UK has priced itself out of the export market.”

Beneficial rain in the US, and a surprise announcement by China that it is holding 100m tonnes of wheat stocks are weighing on new crop markets, he adds. “The market is in drift mode and lacking in interest; the level of activity is as low as it’s been since pre-harvest. Until there’s some bad news on the weather front I can see that continuing.”

Oilseed rape prices are shadowing crude oil markets, putting ex-farm supplies at about £397/t for March. “There’s going to be huge reliance on a successful spring drilling campaign in Russia and Eastern Europe, otherwise rapeseed is going to be extremely tight.”