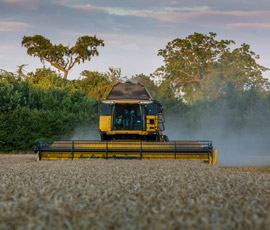 One of the wettest winters followed by a dry summer tested many wheat crops, but some barn-busting varieties still put in a good performance. Richard Allison takes a closer look

This was in a cropping year that initially started out favoured free draining sites, as the UK experienced one of the wettest winters on record.

The season was very wet initially, but then it became much drier, says Ellie Marshall, HGCA research and Knowledge Transfer manager. “Sandy soils, as would be expected in a dry summer, achieved the lowest yields.”

Clay soils yielded about 0.3t/ha more than the five-year average while those on medium and light land were 0.2t/ha below the mean.

But despite this yield penalty, the overall average (9.7t/ha) was close to the five-year mean of 9.9t/ha.

Regionally, Scotland seems to have had a poor year compared to other areas of the UK, but the reasons why are not clear. “Looking at results from the north region, sites in northern England averaged above 10t/ha, but Scottish sites were only at about 8t/ha,” she says.

Focusing on varieties, Kielder had an exceptionally good year, yielding 108% of the control, giving a five-year mean of 107%. “It is a good performer, although it yielded less well in the west,” says Simon Oxley, Recommended List manager.

But he stresses that these are treated yields for plots receiving a robust fungicide programme. Kielder, having a resistance score of 4 for both mildew and yellow rust resistance and a 5 for septoria, will need managing for disease.

Santiago is also a hard Group 4 and has consistently performed over the years. This season it was the highest yielder in the key east region, pipping Kielder into top position at 107%.

“Again you need to manage it for disease. Keeping on top of disease will be particularly crucial this coming season with the many early-drilled crops,” warns Dr Oxley.

Dickens, another hard Group 4, also yielded well in 2013 at 107%. But it offers a better disease package than Santiago and Kielder with an 8 for yellow and brown rust resistance, 5 for septoria and 7 for mildew, he says.

“It is delivering a high yield and has good disease resistance. It’s a lot more forgiving, so growers can prioritise less resistant varieties in their spraying programme.”

Another good yielder with a strong disease resistance is Revelation, which includes fusarium (7) and eyespot (8).

“Leeds offers extra yield if growers are willing to compromise on maturity, being slightly later to harvest.”

“It is still there among the top performers with a good Hagberg of 256, but watch out for septoria,” he says.

In Group 1, Crusoe out yielded Gallant (99 versus 94%) and offers a good spectrum of disease resistance, but it is later maturing. However, it was Cordiale which topped the Hagbergs with an average of 305.

Skyfall and Cubanita are both potential bread making varieties (Group 1 or 2) and while the Nabim grouping approval is still ongoing, both offer promise when just looking at yield.

“Anything above 100% gives growers a yield advantage over existing recommended varieties and both look useful.”

Skyfall is the first to go through the new Nabim approval process with the results expected next spring.

Several feed type candidates also stand out including Evolution and Panacea, both yielding 105%. With a maturity of +3, Evolution is a later maturing variety with a good disease package with a 6 for mildew, 9 for yellow and brown rust.

RAGT Seeds is the UK arm of one of Europe’s leading seeds businesses and has invested heavily in R&D to underpin its understanding of plant genetics. It is this investment that has contributed to an exciting pipeline of new varieties. The company strives to advance crop yields and grain quality, and to produce varieties with improved disease resistance, to meet the challenges faced by growers.