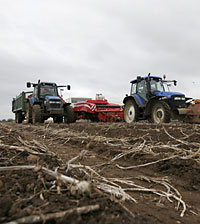 High black dot levels in potatoes in the past two years should serve as a warning to growers to check this year’s field history for the disease, and consider having soil inoculum levels tested and the use of Amistar at planting, advisers suggest.

Levels of the fungal blemish have been higher this year, says Paul Coleman of Greenvale AP. Heavy rain before and after desiccation helped push infectious spores down to the tubers, he explains. “It also meant harvest in quite a lot of cases was delayed from three weeks to four or five weeks after desiccation.”

That extra period in the ground is critical for the development of the disease, Jeff Peters from the Central Science Laboratory notes. “The amount of black dot that develops is proportionate to the time the crop is in the ground from emergence to harvest.”

Research, for example, has previously identified for Maris Piper that the risk of black dot significantly increases after about 140 days. Results from two more varieties should be available by April, Glyn Harper from the Potato Council’s Sutton Bridge Experimental Unit says, which should help determine whether that effect is generic across all varieties.

But it suggests growers who know they have a high risk from either having their soil tested or from previous field history, should look to minimise the number of days crops, particularly susceptible varieties, that are in the ground, Dr Peters says.

For example, for Maris Piper being grown in a high-risk soil growers should aim for about 125 days, he advises.

But using Amistar (azoxystrobin) as an in-furrow treatment allows growers to adjust that time period upwards by about 10 days, he adds, helping give extra time for bulking.

Treatment should be considered almost for any pre-pack crop for set skin movement that will be stored, even if only for a few weeks, that is being grown on land with potatoes in the rotation in the past 10 years, Mr Coleman says. “Black dot seems to be getting worse and Amistar does give a good reduction providing you do everything else right.”

That includes considering using more tolerant varieties, such as Saxon and Vales Sovereign, burning off in good time and harvesting promptly after three weeks, he adds.