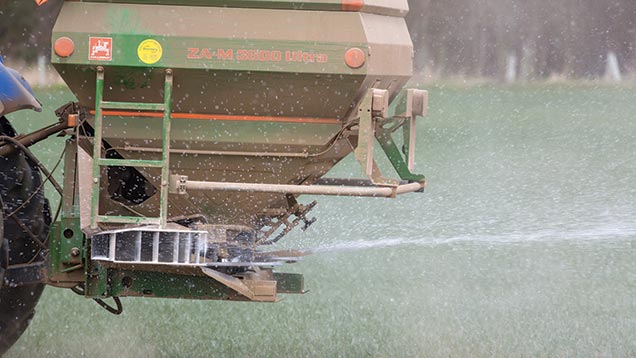 Some high-potential crops are being starved of potash which is limiting yields, particularly on compacted soils at index 2 or less.

The problem with potash is that unlike nitrogen and phosphorus, you can use as little or as much without any environmental risk, says Mike Slater, crop nutrition manager at distributor Frontier.

“And as farmers have not seen any yield increases after using it, many think they can get away with applying as little as possible.”

Potash has an important role in the opening and closing of stomata, which is essential in keeping plants turgid (plant cells fully inflated with water) and thus upright.

“If you don’t keep plants turgid, they will not be photosynthesising as well as they can and nitrogen use declines,” he explains.

In a bid to gain a better understanding of crop requirements, Frontier carried out monthly “destructive sampling” of crops last year. This involved chopping a 5sq m plot, sub-sampling and analysing tissue to determine how much nutrients had been taken up.

“All but two samples last year showed a lack of potash that would have dented yield potential. In another year with less growth and yield, the shortage may not have shown up,” he says.

He explains that last year there were some exceptionally big crops resulting from the high level of irradiance in June and July and some had taken up as much as 500kg/ha of K2O.

“With crops pushing towards 24, 26 or 28t/ha of total biomass, which needs to be kept turgid, there is a need to apply extra potash,” he says.

The second problem area is rising soil density and the effect on plant roots trying to find nutrients.

“Many soils are getting tighter, thereby restricting root development and nutrient uptake.”

It is known that plants need 1cm of root/cu cm of soil to find nitrogen which equates to 10km/cu m. For phosphorus, it is 60km and potash is somewhere in between, he says.

“The consequence of compaction is that you could have an index-2 soil where roots can’t expand, so the it performs more like an index 1 or 0 soil.”

Therefore, the priority is to consider how much potash the crop is taking up, particularly on damaged soils, and it is important to keep levels up.

When looking at applications, there is the erroneous practice of replacing what is removed in grain and straw (offtake), but Mr Slater warns that crops need a lot more potash than is taken off.

Very large amounts are needed at peak uptake and this needs to be supplied. For the crop taking up 500kg/ha in East Anglia, the farmer was applying about 70-80kg/ha of potash compared with an offtake of 60-70kg/ha.

“You don’t need to add much more to make sure crops can take up enough potash,” he says.

But without it, farmers are not going to break beyond the 8-10t/ha plateau, he warns.

Uptake is also being underestimated in other crops. “The current figure for oilseed rape is maybe a bit on the low side and work is ongoing to clarify the requirement to keep canopies turgid.”

He believes uptake in high-yielding oilseed rape crops could be as high as 350-400kg/ha. Potatoes and sugar beet also take up 400kg/ha.

If growers have any concerns, he advises checking tissue levels in cereals in early April instead of at the more usual flag leaf expanding stage. There is still time to apply muriate of potash in late April to early May, where required.

The benefits of applying potash along with another often overlooked nutrient, magnesium, have consistently been seen in winter barley.

A long-term trial being carried out by K+S UK and Eire started in 2008 on a typical Norfolk soil (sandy loam). Tests in 2007 revealed the soil was low in magnesium (index 0), potash (index 1) and soil organic matter, but with adequate phosphorus (index 2). It also had a poor ability to retain nutrients.

There is a lack of data on the effects of potash and magnesium rundown on crop yields. And previous long-term work dates back to the late 1980s.

“So we wanted to look at the effect of not applying any potash or magnesium over time plus applying varying levels,” says the firm’s technical manager Andrew Watson.

“We have consistently seen a 0.6t/ha response in barley in every year, for five years.”

Increases have also been seen in other crops in the rotation, including sugar beet and peas, but there is only one season’s data for these, so far.

Use of potash and magnesium is declining, as highlighted by the British survey of fertiliser practice.

As with potash, magnesium offtake is much lower than uptake. In winter wheat, the amount of magnesium removed in the grain is about 18kg/ha of MgO, but the plant takes up to 30kg, he says.

“So if you apply to offtake, you are not meeting plant requirements for magnesium,” he warns.

As magnesium is fundamental to efficient photosynthesis and heavily involved in grain fill, his advice is to take the same approach as with nitrogen and apply to requirement for each season. This is because both are very leachable.

Instead, they often apply before a crop requiring high levels of magnesium, such as sugar beet or potatoes.

“Form is also important. Many are not soluble, such as magnesite, and you will see little short-term effect on crops, as they can’t take it up,” he says.

“In contrast, magnesium sulphate is water soluble and readily available and also provides a flexible option to supply crop sulphur requirements and allow the use of straight nitrogen products throughout the season.”

Uptake is also complicated and he warns against reading too much into indices.

“You can have an index 2 soil, but plants still can’t take up enough magnesium due to other factors such as calcium and potash levels. Drought and compaction can also impede uptake by roots.

“The index system is simple, but does not tell the whole story. Therefore, look at uptake rather than offtake,” he says.”