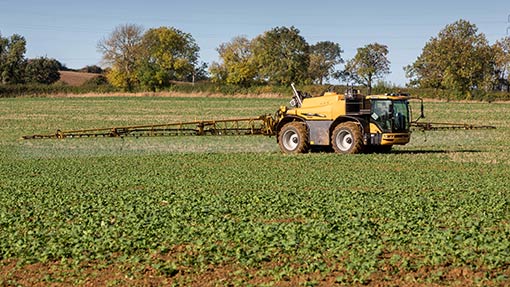 High levels of blackgrass are being reported in some oilseed rape crops this autumn and growers are advised to use herbicide sequences to get on top of the grassweed.

With the inherent early drilling of oilseed rape, growers of UK’s biggest break crop will always run the risk of autumn-germinating blackgrass swamping the crop.

And although dormancy of last season’s blackgrass seed was reported as moderate, recent rain after a prolonged dry spell will have encouraged a new chit and helped weeds already established to grow away.

Essex-based Prime Agriculture agronomist Graham Brooks says that his clients have been put on the back foot after concentrating on putting insecticides on their crops to control flea beetles.

“That has put us a little behind with herbicide programmes, but I’m now applying Centurion Max to around 15-20% of my area, targeting the worst blackgrass fields.”

See also: Being ‘water aware’ could save key pesticides

He adds that the clethodim-based product is the best option where a contact graminicide has not been applied, not only providing blackgrass control, but also tidying up cereal volunteers in the crop.

Where volunteers have been treated, Mr Brooks is recommending carbetamide-based Crawler in sequence with propyzamide, contained in products such as Kerb Flo 500 or Astrokerb.

“We used the sequence last year and you could see it achieved better control than a propyzamide product on its own,” he explains.

Mr Brooks sees Centurion Max and Crawler as a straight substitute either way, with both products applied to hold blackgrass growth until an application of propyzamide in November.

“It is also prevents us from having to apply the propyzamide too early in less than optimum conditions,” he says.

Technical lead at Makhteshim-Agan UK (MAUK) Paul Fogg says many growers are now buying into the idea of the holding spray but residuals, such as their product Crawler, need moisture.

He says that now there has been some rain to wet the topsoil, conditions are ideal to get the product applied and keep blackgrass roots smaller and shallower and less hard work for the propyzamide application.

“With blackgrass already well established in places, a contact graminicide could be added to Crawler to boost control, depending on what’s already been applied.

“There is also a soil moisture deficit at present, so risk of carbetamide reaching groundwater is low and the chemical is likely to dissipate before drains begin to flow,” says Dr Fogg.

Whichever blackgrass “holding spray” is being used, the propyzamide-based products applied later in the autumn will hope to be the final nail in the coffin for blackgrass.

Dow AgroScience’s oilseed rape agronomist David Roberts says that control of blackgrass in rape is becoming like that in wheat – “stacking” actives to achieve the best results.

“You can’t rely on propyzamide on its own and we shown sequences with Centurion Max have been the most effective at blackgrass control.”

Looking ahead to Kerb Flo 500 or Astrokerb applications, Mr Roberts reminds growers that soil temperatures should be 10C and falling and have adequate moisture.

“All our data shows that’s typically the first two weeks of November, but growers can use the postcode tool on the Dow website to get an indication of when conditons are right.

“However, a local assessment will be required to ensure that applications are made within the stewardship guidelines,” he says.

Rothamsted Research blackgrass expert Stephen Moss warns that growers should be prepared to spray oilseed rape crops off if blackgrass numbers spiral out of control.

He believes that although growers with a “lawn” in their crops have no choice but to apply the residual herbicides available, too much reliance is being placed on them.

“It really is ill advised to be growing oilseed rape on the worst blackgrass fields and although you may get good control in a year where conditions are ideal for residual herbicides, if they aren’t you could end up in a real mess,” he adds.