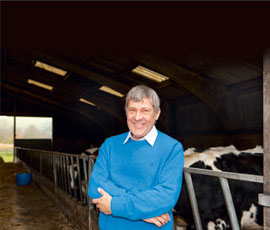 The Voluntary Initiative, which promotes responsible pesticide use, has celebrated its 10th anniversary. Olivia Cooper speaks to incoming chairman Richard Butler about its successes, failures and the future

Why did you take up your new role as chairman?

I care passionately about productive farming, and think that farmers are very good at putting their own houses in order when given the opportunity. The VI has been very successful in preventing extra legislation on farming, and I believe we have a lot to be proud of. I want to build on that success.

What has driven the success of the VI? Is it just the threat of a pesticide tax?

Initially the tax threat did focus everybody’s mind, but it goes far wider than that. It has demonstrated that a number of bodies can come together and agree on a common agenda. Farmers have recognised that it’s right to get involved and work together. Getting support from the assurance schemes has also been key.

The livestock sector is being called upon to organise a badger cull to tackle bovine TB. What areas of the VI could be adopted to help farmers work together?

The VI has been a very successful model that’s been copied in other industries and we are always happy to share our experience of bringing different organisations together. As a starting point, making sure decisions are based on good science is vitally important. The farming industry has shown that it’s more than capable of working together to help itself when it’s given the opportunity.

How has the VI impacted on your own farm?

I’m quite proud of our environmental record here – we were one of the first farms to join the Countryside Stewardship Scheme, and we’re in both the Higher Level and Entry Level Stewardship schemes. We are in an important river catchment area, and with our soil types it is potentially very much at risk of diffuse pollution. There is no doubt that properly placed buffer strips are very effective – and with the sprayer testing and operator training our pesticide application is considerably better than it would have been before the VI.

What has been the highlight of the past 10 years of the Initiative?

We now have 20,000 trained sprayer operators, and about 86% of the UK’s sprayed area is done by machines which are tested under the National Sprayer Testing Scheme. We have also trained 1,200 agronomists, and the vast majority of farmers have signed up to the requirements. There were key targets set up initially, which we met, and if we hadn’t delivered I’m sure we would have seen further legislation introduced.


On reflection, could anything have been done better?

There are always going to be areas you can improve on. I don’t think farmers’ understanding of what the VI is and does is that great, and although we’ve had very active engagement from larger users of pesticides it’s been much more difficult to engage smaller users. That’s an area we will want to focus on, because if there is an incident it undermines what the rest of us are doing.

Despite the scheme being in place for 10 years, we are still seeing pesticide spikes in water. Why is this and how can the industry tackle it?

One of the biggest problems is metaldehyde in slug pellets, which can be leached following heavy rain. Careful timing of applications is therefore very important, as is following best practice for all pesticides. The Sustainable Use Directive and Water Framework Directive, which are coming in this autumn, will help focus peoples’ minds. The good news is that because of the VI we are already meeting almost all of the new requirements. Our role is helping farmers rise to the challenge where high levels of pesticides are being found.

How real is the threat of a ban on these pesticides if they continue to be found in water?

It is very real. We have already lost IPU for example, and the government could easily ban more products if the industry doesn’t comply. The loss of more active ingredients would be very serious – in practice we would import food produced using exactly those same products, putting us at a huge competitive disadvantage. Taking action as an industry has to be infinitely preferable to that.

Where do you see the Voluntary Initiative in 10 years’ time?

The big challenge for farmers now is to produce more food while impacting less on the environment. The VI is absolutely central to delivering that. Government policy is supportive of voluntary schemes rather than layers of bureaucracy, and we have a plethora of new schemes like the Tried and Tested Nutrient Management Plan, the Campaign for the Farmed Environment, and the Greenhouse Gas Action Plan.

I think we need to rebrand the VI, to include a reference to crop protection and pesticides, so it is clear what it actually does. But we also need to join together with the other bodies to produce one clear message for farmers. I don’t think that’s happening at the moment. There are common solutions that run across all the different initiatives and we need to have far more joined up thinking and communication.

Do you see its scope widened to soil and nutrient pollution?

No – there are other initiatives that cover that; we just need to work more closely with them.

Will it be overtaken by legislation?

I hope not. The aim is to prevent unnecessary legislation, not be overtaken by it. We have a very favourable political balance at the moment, and if we are successful in getting closer co-operation between the different initiatives, I see no reason why it shouldn’t succeed. The only danger is that, without co-operation, we will be bombarding farmers with too much information, which they may start to ignore.

Could the VI have a use in the introduction of GMOs?

GM is an important subject for the future and the VI would be happy to help get different organisations together. But there is a polarity of views, and one of the reasons the VI worked is that the parties involved could agree on a common agenda. Unfortunately we haven’t arrived at that point with GM yet.