Zero-tillage may not be right for every farm, but for some growers the establishment system has resulted in significant financial and agronomic benefits.

The effectiveness of blackgrass control in no-till farming practices has been widely debated in the UK for more than two decades.

With fewer than 5% of arable farmers practicing 100% no-till, it is a system that has been slow to catch on despite popularity elsewhere in the world.

Advocates claim no-till farming is suitable for all soil types in areas of high or low rainfall and is responsible for slashing costs by up to half, improving soil health substantially, helping to control weeds, all while retaining crop yields.

It may feel like an impossible feat for many, but with increasing political focus hinting at financial rewards, is it something farmers are going to be expected to adopt across the board?

Tom Sewell of Sewell Farms, who works over 450 ha of land near Maidstone in Kent, didn’t take the challenge of adopting no-till lightly.

Undertaking a Nuffield Scholarship exploring sustainable soil management, and visiting over 100 farmers around the world, it took him three years to develop the understanding needed on his farm to carry forward 100% no-till.

“Since the stubble burning ban in 1992 we’ve always gone shallower in our cultivations. After successfully putting in rape with a tine drill, we started questioning why we were still cultivating for wheat and beans,” he explains.

“The true motivation for us adopting no-till has been soil health. We haven’t done this to reduce costs but to reduce erosion and run off, and improve organic matter, carbon and worm numbers.”

“We have very abrasive soils here and are used to wearing metal out very fast. When we did used to plough we’d be replacing plough points every lunchtime.”

Mr Sewell says the visible benefits of no-till were almost instantaneous on his farm with soil much more consistent. “It’s well drained and walks very well even in the rain, without being compacted. It is consolidated with good structure and lots of worm holes and very good drainage.”

In theory this should help alleviate grass weeds on the farm, but blackgrass remains a problem, and weed and disease control is still a prominent aspect of their management plans.

“Blackgrass is still present, but it is much more manageable now. Because we’re not cultivating, when the seed hits the floor it stays where it is covered in straw and germinating consistently at the same time.”

“It is very shallow rooted and we’re finding Liberator (flufenacet + diflufenican) and Atlantis (iodosulfuron + mesosulfuron) are working better than they ever have done.”

“Whereas in cultivated land blackgrass seeds can typically be 3-4 inches deep, spread throughout the soil profile and you can’t tell when they will germinate.”

“They also become much deeper rooted. Our blackgrass control is not 100% but I don’t think ploughing or cultivation would solve the problem.”

Mr Sewell’s main concern in his fight against blackgrass is the potential to lose glyphosate, which has so far been vital in his control programme.

“We’re quite reliant on it, but so is everyone that uses no-till. Loss of glyphosate would push everyone to ploughing again which isn’t cost effective, sustainable or good for the environment, putting us back 35-40 years.”

Identifying the challenges of no-till, using nothing but a 4.8 metre Cross Slot drill and a 12 m set of rolls, Mr Sewell took the leap, selling all his cultivation equipment prior to going 100% no-till in one year.

“The main learning curve for us was not being able to use cultivation to get us out of trouble, such as speeding up the soil drying.”

“We have found that drilling earlier in the autumn when the soils are a bit firmer and tighter is best because you’re not mineralising nitrogen through cultivation, so plants take a little longer to establish.”

“I am not a fan of spring drilling with no-till, and this year’s weather proved my point. You have to learn to have a lot more patience deciding when to go and when not to go, waiting for when the soil conditions are right. You have to change the way you think a bit.”

James Rimmer, an independent agronomist who covers Kent and East Sussex, explains that no-till may not be the system to suit everyone particularly when battling blackgrass.

“Cultural control over chemical control methods in blackgrass still remains the back bone.”

“Some of these can apply to no-till systems, such as rotation and spring cropping, but there is no denying that good ploughing does have a substantial impact on blackgrass populations.”

“In my experience the use of cover crops can both help and hinder blackgrass control and it is all relative to the farm.”

“There is no doubt that no-till has both environmental and cost benefits, but there is no one solution for controlling blackgrass, and adopting no-till is very soil type dependent.”

More growers are becoming increasingly flexible in their cultivations, he notes.

“In farming we are totally dictated by the weather, so some are using no-till when the conditions are right, but also revert to conventional methods if necessary, which is working well for them.”

The main factor in blackgrass control is attention to detail, with all the basics needing to be perfect and general good farming practices in place.

Field history, blackgrass populations, and soil type all need to be considered when developing a control strategy, he says.

“Using as many modes of chemical action as possible will help to target resistance. Glyphosate is very important in blackgrass control and for spraying off cover crops.”

“If we lose glyphosate there will need to be more concentration on cultivation.”

“No-till farmers may have to resort to discs to destroy weeds and cover crops, but it mustn’t push us down the selective herbicide route, because we are already relying too much on chemical options.”

Mr Rimmer expects other grass weeds like rye-grass and brome to become an increasing problem.

So the focus needs to be on applying residual chemistry in the autumn where necessary to reduce need for contact applications.

“As we all know there is no silver bullet to controlling blackgrass, and although many farmers have the same problem, the solution can be totally different.”

Chemistry remains a crucial part of blackgrass control and the conditions in which pre- and post-emergence herbicides are applied can have a substantial impact on the treatment’s efficacy.

“It is often the case that Liberator shows very good results in no-till systems because seeds or blackgrass plants are kept within the top 5 cm of soil where the residual herbicide can fully cover the rooting zone.”

“Grass weed control in no-till operations can be effective because if seed return is high then leaving seeds on or close to the surface and not burying them will mean that they can chit, grow and be sprayed off before drilling of the next crop.”

“No-till can work in reducing blackgrass plants, but it is relative to the farm and the year.

“It is certainly a factor in control, but it is not the total solution and keeping a plough on the farm is still worthwhile.”

“Rotational ploughing plays an important role in burying blackgrass seeds every five years or so, or after a particularly high seed return.”

For the best pre-emergence control, he recommends applying Liberator at 0.6 L/ha with added prosulfocarb, pendimethalin or diflufenican at a dose dependant on the level of the weed problem.

This can be followed with triallate to boost control further. “Applications should be within 48 hours of drilling ideally into moist soil to target any seeds disturbed by the drill.” 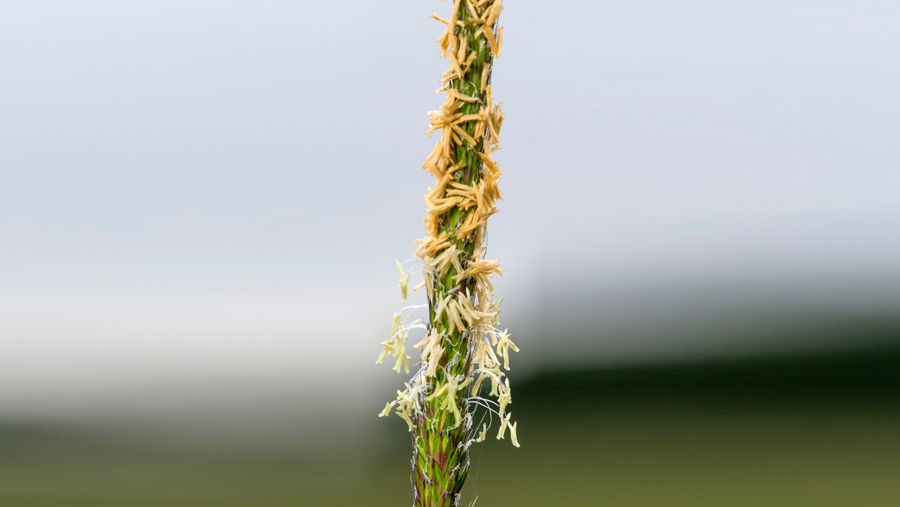 Find out more about how crop rotations can improve soil health, limit herbicide resistance, help with time and cost management, and break the cycle of blackgrass

If you have black-grass, taking steps to reduce the population is key, while farmers fortunate enough to be free of black-grass need to keep it that way. Information and advice to help manage blackgrass populations down.