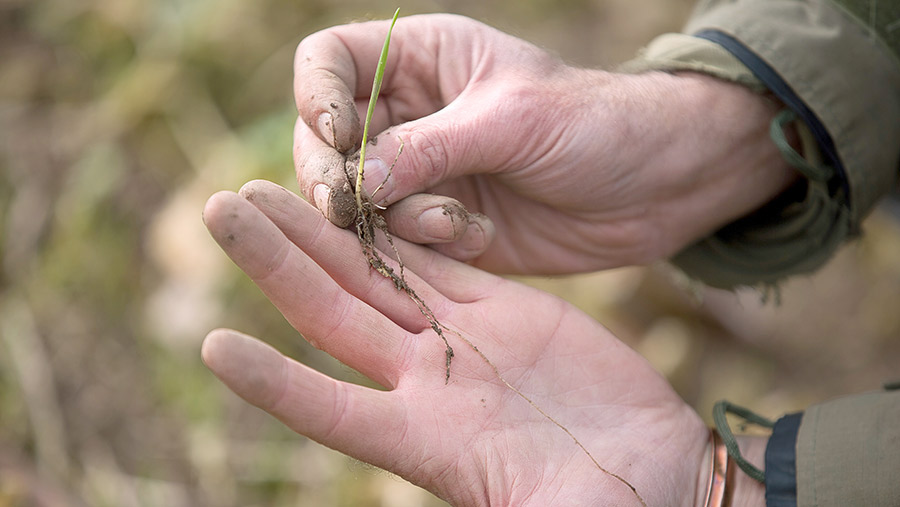 Some pioneering growers have reduced their reliance on inputs by up to 50% and the secret behind their successful adoption of a low input approach has been a different type of agronomist.

Modern agronomy is based around the recommendation of chemical solutions to problems such as pests and diseases.

However, as growers look to reduce their inputs, many are questioning whether agronomists are equipped to give them the advice they now need.

One example of the new type of agronomist is Mike Harrington. Since setting up independent agronomy firm Edaphos, based in Oxfordshire, in 2005, he has become the go-to choice for forward-thinking farmers leading the low input revolution. 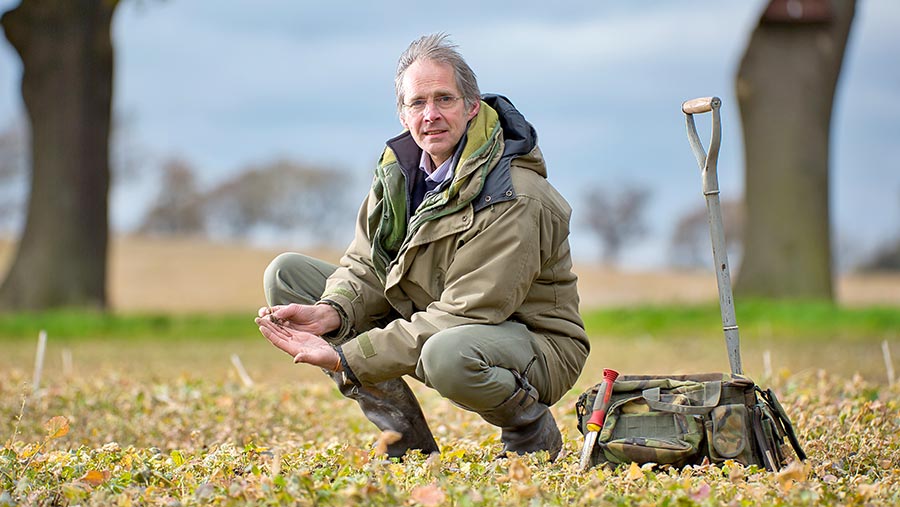 He bases his advice on the core principles of soil and plant health garnered before the nitrogen boom of the 1920s, which allows him to take a whole systems approach where chemistry is the last resort, not the first.

As a result his business has expanded rapidly in the past three years, with his team of five agronomists now advising more than 350 farms.

Having trained as an agronomist in the 1970s, Mr Harrington first started to question the wisdom of the modern chemical-based system in 1990 when he attended one of Acres USA’s agricology conferences in the US.

“Acres UK was set up after the Second World War to educate farmers about natural farming systems as they didn’t like the direction agriculture was going in,” he says.

Agriculture was entirely based around natural systems, where crops were grown in a natural rotation with livestock and grass, before the food shortages of the First World War hit and the nitrogen boom of the 1920s took off.

“They started opening my eyes because they were getting really good results by doing less than I was.

“It made me question the efficiency of how we manage and grow crops,” he says.

As a result, Mr Harrington first set up a consultancy company to talk about soil health, which ultimately is what agronomy is about at its fundamental core, he says.

“We have got ourselves in a situation where chemistry drives agriculture, and we are producing crops by products rather than by the system.”

Although chemistry solutions are driving our current farming practices, they are not the root cause of the problem, he says.

Instead it is the modern thinking, first seized upon in the 1920s, that additional fertiliser is responsible for yield.

Fertility is the natural output of soils without intervention, but artificial fertilisers have allowed farmers to bypass poor field fertility and instead run an intensive system, which in terms of production has been “fantastic”.

“We have been able to bypass natural systems for a while, but in the end it fails because nitrogen becomes a curse.

“We apply more and more, but natural systems are driven by carbon, not nitrogen.”

With nitrogen the driver, organic matter is burnt off, and as it deteriorates, soil biology can’t function and nutrient efficiency drops, resulting in weak plants.

Weak plants are vulnerable to pests and disease, so an entire chemical industry has been built to deal with the results, while never addressing the underlying cause.

This has encouraged many to start to want to go back to a whole systems holistic approach, which is often when they turn to Mr Harrington and his team.

Edaphos is providing advice for farms in the south of Cornwall, up to Yorkshire, down to Kent, and even across into Shropshire and Wales.

“I take the view that if somebody phones us up for help, we will do our utmost to assist them, as we are quite specialised in our area,” he says.

Rather than helping each farmer to farm more sustainably, Mr Harrington says his job as an agronomist is to help move each farm to a better place.

“I have a bit of a problem with sustainability. Sustainability is holding something in a moment of time, but soil is constantly either regenerating or degenerating,” he says.

Soil is created by aerobic micro-organisms that need air and a carbon source to regenerate in order to keep soil in a state that can be farmed.

When organic matter is lost, soils become more anaerobic and start to degenerate, which leads to poorer root function and requires soluble products, which cost an increasing amount, in order to be able to grow a high-yielding crop.

“We are creating environments better suited to growing blackgrass. Rather than putting herbicides on, we need to change soil conditions.”

“People say they are going to buy a direct drill, but it isn’t the answer,” he says.

“The catalyst for change on a farm needs to be a completely new mindset. There is a set of tools – mechanical, biological, and nutritional – which are there to be used in the appropriate manner.”

For Mr Harrington, his advice starts with defining biologically where a system is, and how to introduce air and carbon, and then maybe using a direct drill, but equally potentially a plough.

“The art of what we are trying to do is understanding where your system is and what you want to grow as a crop.”

Defining such a plan is much harder work for the agronomist than recommending chemicals would be, and can only be done as part of a partnership with a farmer.

“The science of biology is hard compared with chemistry and physics. We all want the easy route but we have gone too far, and now is the time to readdress the issues.

“We need to reconnect and understand our soils – there was a lot of wisdom and knowledge 80 years ago.”

Growers must also want to change themselves, so Mr Harrington’s firm runs a training programme for its farmers to help them understand about soil biology and to enable them to become the decision-makers.

Some of Mr Harrington’s clients have been able to cut their chemical use by 50%, but the right to do this has to be earned, it can’t be done overnight, and isn’t even the end goal for some.

“If you want to drop fungicides you have to drop the nitrogen rate, which will result in a drop in yield.

Although the goal of most farmers is to reduce their chemical use, Mr Harrington is not against chemistry.

“If we have a problem that we can’t solve any other way the let’s use chemistry. It’s not the tool that is wrong, it is the way it’s used.” 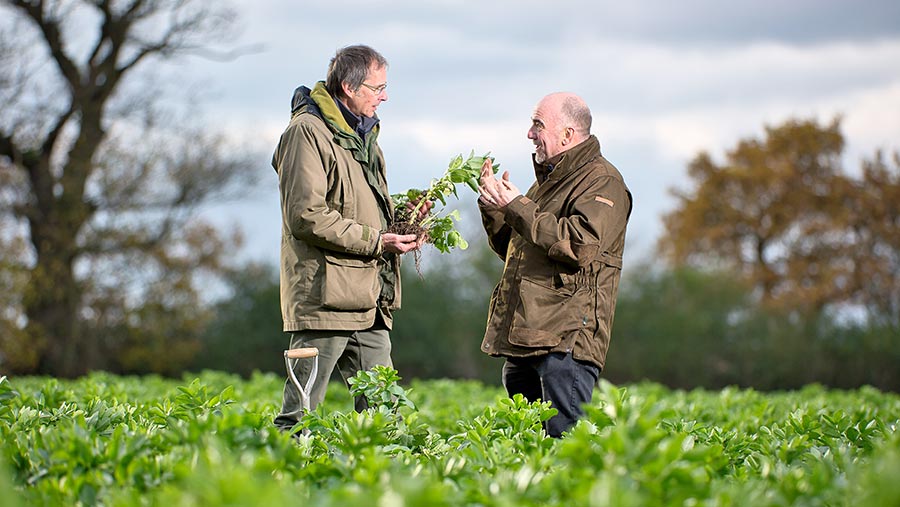 Staffordshire grower Tim Parton was named Soil Farmer of the Year by the Farm Carbon Cutting Toolkit in 2017.

A focus on soil biology means he has already reduced his nitrogen inputs and doesn’t use insecticides, without affecting his yields. Now he has his sights set on moving a step further and transitioning to organic no-till.

Shropshire grower Michael Kavanagh has achieved major reductions to both his fuel bill and horsepower requirements by switching to strip-till, growing cover crops and introducing sheep to his rotation.

In the five years since he switched to a Claydon drill, the fuel needed to drill his crops has reduced from 13.5 litres/ha to just 6.5 litres/ha. At the same time, he has been able to drop from a 210hp to a 130hp tractor.