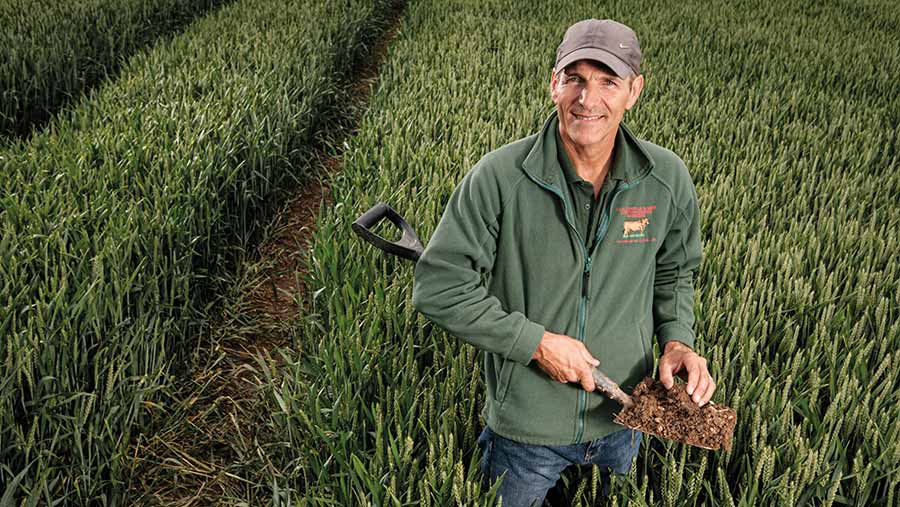 After a successful start to the cropping season, inflationary pressures have sent production costs spiralling at Paul Temple’s Yorkshire farm, where his winter wheat growing costs have risen by £156/ha from last year.

With the decline in Basic Payment Scheme (BPS) income looming, Mr Temple – Farmers Weekly’s 2021 Mixed Farmer of the Year – decided to transition to a simpler, more cost-effective farming method to lower production costs and make up the shortfall in subsidy income.

Five years on and his “conservation agriculture” journey at Wold Farm has helped him ride the tides of inflation, which has pushed up production costs for winter barley, oilseed rape and spring beans by £120/ha, £155/ha and £48/ha, respectively.

As part of his conservation agriculture approach, inputs have been reeled in and a no-till system put in place, with the aim of cutting machinery and labour costs.

“I try to avoid using the phrase regenerative agriculture as this implies those not using the technique are carrying out degenerative practices – which is certainly not always the case,” he says.

“The season started off optimistically,” he says. “Harvest went remarkably well and we had a good drilling campaign. November was kind, which favoured crop growth, so crops are looking well, but rising production costs have turned things on their heads and you can’t help but feel more nervous.

Fortunately, the scaling back of fertiliser prepared the 360ha mixed beef and arable farm well for the shock of the fertiliser price hike, and consequently N rates for winter wheat will remain unchanged this season, at 160kg/ha.

He is currently awaiting results of the farm’s latest soil analysis, which will allow him to fine-tune any further changes, if required.

Incorporation of farmyard manure from the 550 head of beef cattle benefits crop growth and soil health, with no bought-in P and K fertiliser used.

Manure is applied to two-thirds of land at some point within the rotation, and is turned once with the telehandler bucket before application to make a more readily decomposable compost-like manure.

Insecticides are being phased out and fungicides are used sparingly as Mr Temple looks to make the most of his soil biology, where organic matter has risen to 7% in some fields.

Previously he would apply an autumn fungicide on oilseed rape, but now only spring applications are used. He puts a high priority on working with his agronomist, monitoring disease threshold levels and making the most of online apps to identify potential disease threats.

As a result, “we have not used a T0 spray for five years and just apply two main fungicides at late T1 and T2.5”. However, he considers each year individually and looks to treat to requirement.

Mr Temple decided to go down the no-till establishment route, which has brought many positive impacts to the tenanted farm near Driffield, East Yorkshire, including reducing both machinery and labour costs by one-third.

All crops are established with a Weaving direct-drill, which replaced the plough, power harrow and Vaderstad drill five years ago.

“By going no-till we achieved what we set out to do five years ago – we successfully reduced our reliance on machinery and labour, putting us in a better position for the decline in BPS,” he says.

One challenge he faced was making vining peas work consistently under no-till establishment, and last year he made the switch to spring beans.

“We were happy with the beans, which yielded 5t/ha, with a visual difference in winter wheat growth in crops following beans,” he says.

After transitioning to the no-till system he discovered a stark difference in the growth habits of wheats, with no-till crops noticeably less forward, which has been the case year on year.

“Many growers in this area traditionally use the plough and combination drill, as it reliably provides potential for a good 12t/ha wheat crop which is potentially more profitable.

“Although we have downgraded our wheat expectations from 12t/ha to 10t/ha, the system is lower-input and hopefully offers sustainable returns.”

Mr Temple says he is looking to carry out some drainage work on farm for the first time in his career. Ploughing would previously reset any wet patches in the soil, but with direct drilling a 2.5ha area has proven problematic as a result of a lack of soil movement.

“Don’t expect no-till cultivation methods to solve drainage problems,” he says. “If there is an issue and you don’t move the soil, it can become stagnant and lose worm numbers.

“Awareness of drainage is really important and part of a new learning process.”

Sharing a New Holland 8080 combine with a neighbouring farmer for a number of years has come with many benefits for Paul Temple – both financial and social.

Farming can be an isolating profession, and with more awareness of mental health issues in the industry, Mr Temple says sharing machinery offers a way of staying connected with others.

It also brings discipline to the purchase and running of equipment. With about three to five days difference between their harvest dates, they find the workload split works well.

Mr Temple says: “It considerably cuts both of our costs but not only this, it takes a degree of responsibility off of our shoulders during harvest.

“If something goes wrong there is somebody there to help out if needs be.

“It is worth asking yourself when you’re considering whether or not to purchase a new piece of machinery if there is an alternative way.

“Machinery and labour make up a significant proportion of production costs and it is worth remembering that when you buy a new piece of equipment you are not just buying the machine but also the labour to go with it.”

Benchmarking is another Important method for Mr Temple to keep on top of his costs as it allows him to compare and share his figures with others.

“It truly is a useful technique to identify if you’re heading in the right direction and highlights ways in which certain parts of the business can be improved,” he says.

The 2022 Farmers Weekly Mixed Farmer of the Year is sponsored by Cawood.