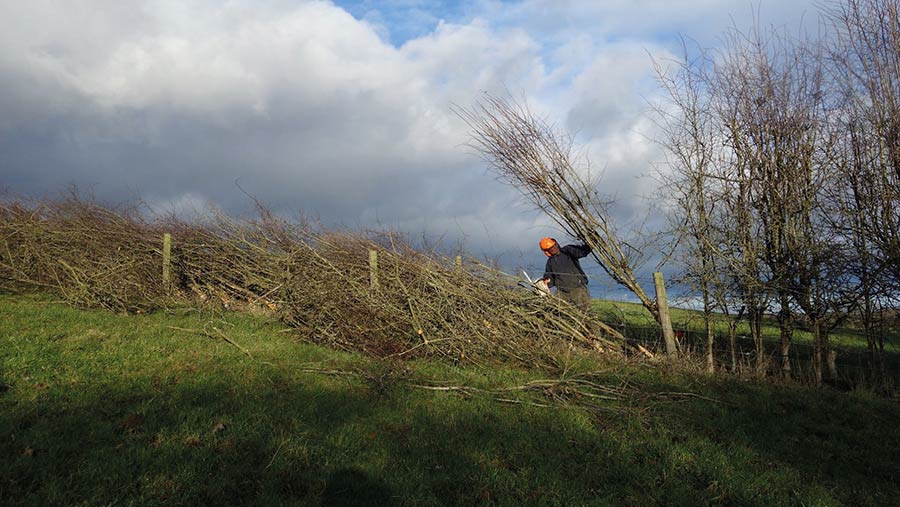 Healthy hedges are a lifeline for wildlife, providing food and habitat, including for many of the birds within the Farmland Bird Index as well as for priority mammal species in the UK’s Biodiversity Action Plan.

They also help with pollination and pest control, reduce flood risk, conserve soil and capture and store carbon, to the extent that the UK’s Committee on Climate Change suggested in a 2019 report that the hedgerow network should be extended by 40% as part of the UK’s 2050 net zero emissions target.

See also: Epoxiconazole: How to fill the fungicide gap

But management of about 500,000km of hedgerows comes at a cost to landowners, whether it is cutting every year or coppicing once every 15 years, and is not without its controversy.

That might be why the most recent extensive survey of hedgerow condition, albeit back in 2007, found that only about 50% were in good structural condition, and just 12% in good overall favourable condition in arable areas. 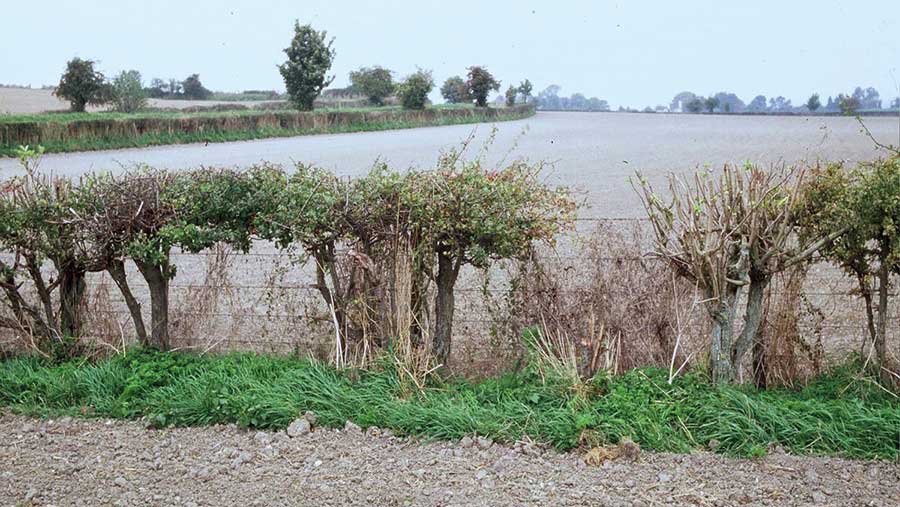 Nigel Adams, who runs his own countryside management advisory service, based in Oxfordshire, says: “Since then, in my area, hedges on arable land haven’t improved much.

It’s down to poor management – both over-management and neglect. Hedges are dynamic and constantly changing, and management is critical.

The ideal hedge has some hedgerow trees and a margin next to it – that’s the recipe for total biodiversity.”

1. How to establish a new hedge

With policy potentially driving an extra 200,000km of hedges in England alone, both Mr Adams and Mr Fiennes believe grants (see table below) will usually be available for those seeking to put in new hedges.

“These usually come with prescriptions,” says Mr Fiennes. “The process is you apply for your grant, and then wait for confirmation. You then have two years to plant the hedge under the capital works.”

The best time to plant a hedge is from mid-November to mid-December. “You want the whips – little hedge plants – to establish through the winter. Plant in a staggered double row, about 40cm apart with around four to eight plants/m,” he says.

Virtually all new hedges are mixed species, with the countryside stewardship requirements for a new hedge (BN11) stating that no one species can make up more than 70% of the total.

“Mixed species provide a constant source of food,” says Mr Adams. “We want early blossoming species, such as blackthorn or wild plum, going on to hawthorn, although which species will depend on your soil type.”

Faster-growing species, such as willow, alder or wild cherry, are an option for hedges being grown mainly for carbon capture or wood fuel.

Including hedgerow trees is another consideration, he adds. “Oak is the obvious one, as we’re losing our ash trees to dieback, but novel species such as small-leaved lime or crab apple could be an option. Variety helps improve resilience in the face of climate change.”

“New” hedges can be completely new, or be planted where “zombie” hedges exist with lots of gaps, Mr Adams says.

“For brand new hedges connectivity is very important, as hedges are corridors for wildlife – think about where you can join up two coppices or woodland areas, for example.

“I also like green lanes – putting a hedge either side of a trackway. It creates shelter and warmth and a fantastic habitat.”

Preparation before planting is important. “The summer before you plant, spray off a 1-1.5m wide swath where the hedge will go, possibly twice. That will pay dividends in establishing the hedge without weed competition.”

Protecting a new hedge from grazing by rabbits, hares and deer is often necessary, but first assess the risk, he suggests.

If you do need to protect from rabbits and are using plastic hedge guards, make sure you remove them in year three, Mr Fiennes stresses.

“Unfortunately, that’s not commonplace, and the countryside is littered with them.”

Another option is to use rabbit netting. “I’ve found the hedge plants thrive as they get more light,” he says.

2. How to manage a hedge

In the first few years of a hedge both men advise taking the tips off the young plants to encourage more growth, although they disagree on how often. Mr Adams suggests doing this in year two or three, while Mr Fiennes says annually.

“It’s in its first five years it wants cutting annually,” he says. “But just 1cm off the tip of every leader. In the first year you can do that with secateurs, and the next year you will have three times as many, so a flail cutter is likely to be needed. It helps it tiller out to produce a thick hedge.

“By year five you’ll have a hedge 6ft tall and 4ft wide which becomes attractive to birds and starts to flower and fruit.”

Coppicing after five years is a bit radical, he admits. “You need to be sure the regrowth won’t get grazed off, but it will produce about half a dozen stems from each stump and pay dividends by forming a dense, thick hedge.”

Most hedge managers opt for trimming which, when carefully done, encourages thick, dense and bushy hedges liked by most wildlife. Both Mr Adams and Mr Fiennes are in favour of an incremental approach where the hedge is not trimmed to the same point each time it is cut.

“The worst thing you can do is cut back to the same height or knuckle line each time,” says Mr Adams. “I call it the ‘magic height’. Doing so contains the hedge’s growth, so it becomes empty at the bottom, develops into a mushroom shape and slowly fades away.”

A Defra-funded project run by the Centre for Ecology and Hydrology found that incrementally trimming annually produced two to three times more berries than cutting back to the same height. 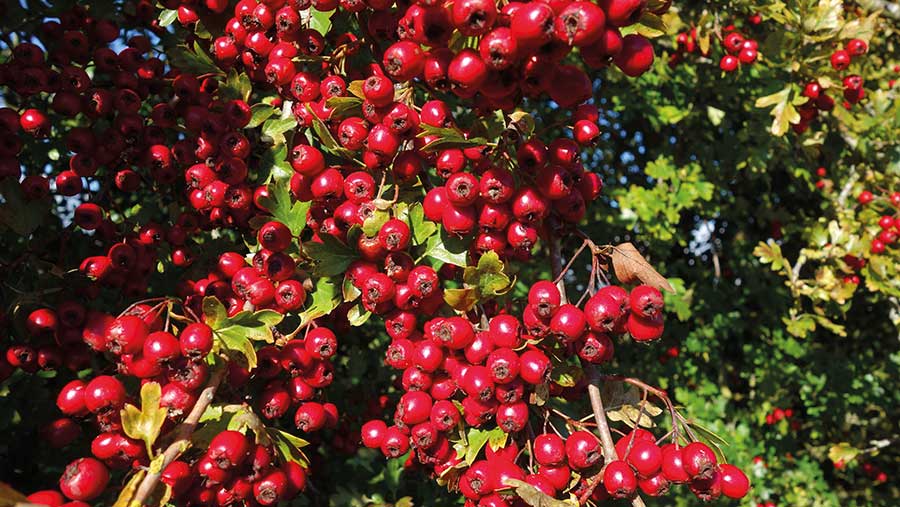 Gradually bringing the hedge to an A-shape is best, Mr Adams suggests. “It replicates the shape a tree wants to be – the biology of the tree plant responds better.”

Every hedge should be evaluated annually to decide on its management, says Mr Fiennes.

“If you do trim annually, tip rather than flail. That starts to create a shape. By just tipping you save steel on flails, and diesel because it is less intense work. But cutting fewer miles will also save you diesel.”

At Holkham, all hedges are abutted against a 6m margin which minimises that risk, Mr Fiennes says. Leaving space for flower-rich margins to develop is very important for wildlife, especially pollinators.

Fruit only develops on last year’s growth, he adds. “When you’re taking 2cm off the tip of every branch you will still have fruit under that. In cold snaps like we had in February you will have birds feeding off food sources that historically have never been there.” 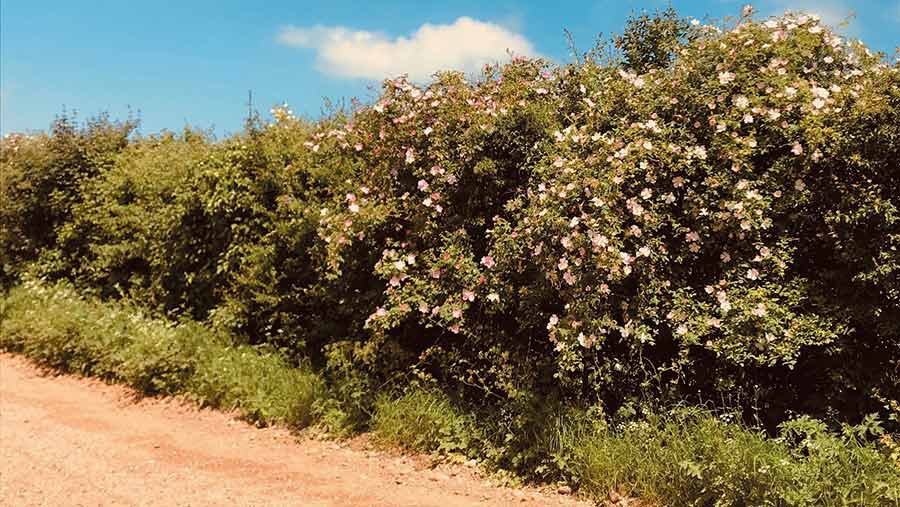 Where hedges are to be left untrimmed, he suggests leaving them for five years rather than three, and then cutting back to four-year-old wood, then leaving it again. “But don’t do the whole farm like this – don’t block-manage your hedges.”

All hedges need managing through their lifecycle, Mr Adams points out. He has developed a 10-point scale ranging from an over-managed, heavily over-trimmed hedge with gaps and gnarled or rotting stems to a neglected hedge that has developed into a line of trees.

“A lot of farmers have forgotten how to read a hedge to see where it is in its lifecycle,” he says.

Having hedges at different stages and managed in different ways helps create diversity, to the benefit of wildlife, Mr Fiennes suggests.

“Yellowhammers, for example, prefer hedges that are about 3.5m tall, whereas nightingales want a hedge 4.5m tall and 3-4m wide. Bullfinches and long-tail tits like thick, dense hedges and brambles.”

3. How to rejuvenate a hedge

All hedges ultimately will need rejuvenating, Mr Adams says. “Every hedge on a farm should be rejuvenated at least once in the farmer’s lifetime.” 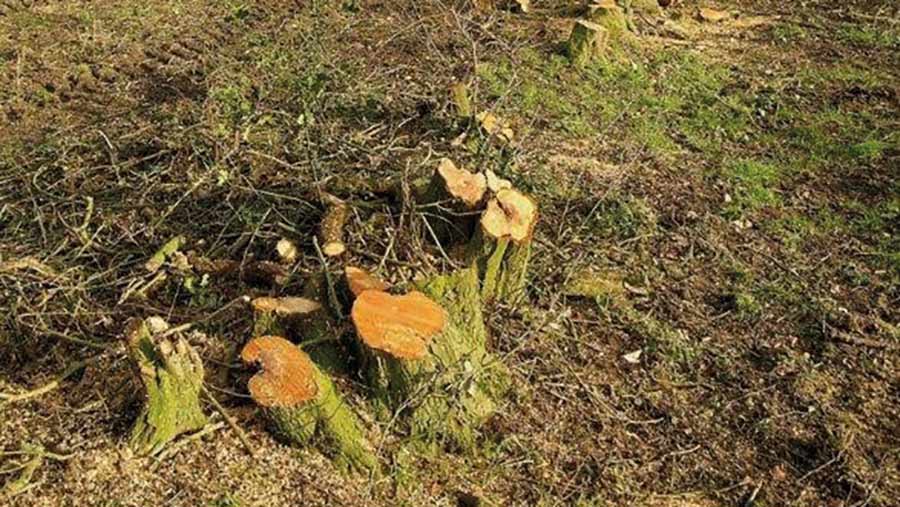 Coppicing can be used to rejuvenate a failing hedge © Nigel Adams

Coppicing removes the hedge down to a stump, usually by chainsaw to about 5-10cm height. “It’s cheap, and the only way of rejuvenating a dying hedge,” he says. “It allows you to replant the gaps and build up any bank, but make sure the regrowth isn’t eaten by rabbits, hares and deer.”

Hedge laying is more specialist and expensive. There are a number of different styles, but all involve cutting the stem to allow the branch to be placed at a slant or even along the ground.

The cut needs to be deep enough to allow the stem to lay, but with enough wood remaining to allow sap to draw up through the stem to keep the plant alive and encourage new growth. 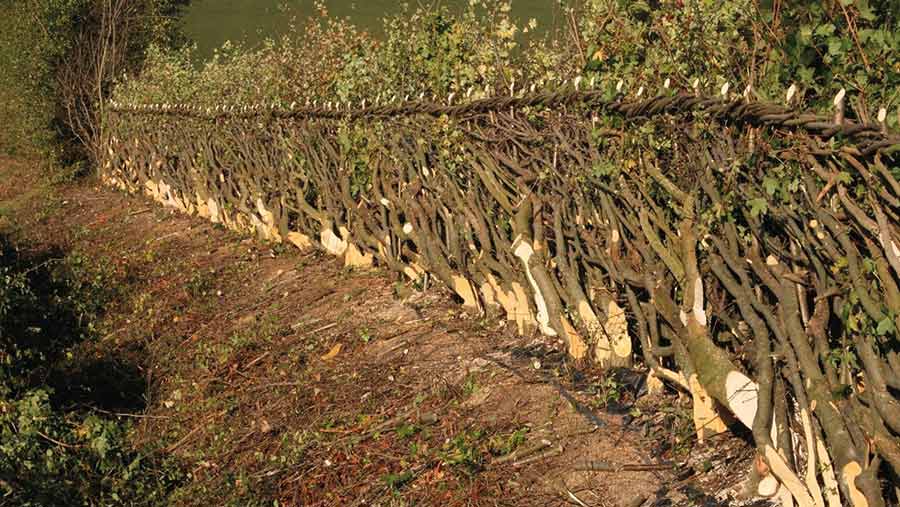 A traditional “Midland Bullock” style is laid at a 45deg angle with stakes driven in a line down the middle of the hedge, and then bound along the top with hazel or willow.

An alternative cheaper-style conservation laying was developed by Mr Adams. “It’s ideal between two fences. It doesn’t use stakes and binding as you weave the hedge tightly together, and costs about half the price of a traditional method, which usually costs around £15-£20/m in the South East.”

One advantage of laying is that it leaves a habitat for wildlife immediately after you finish, while also providing a stock-proof barrier.

But nowhere near enough hedges are being rejuvenated, he stresses. “I guess less than 0.1% of hedges are being laid every year – we need to be doing more, not least because of the poor overall condition of our hedges.”

10 top tips for a healthy hedge