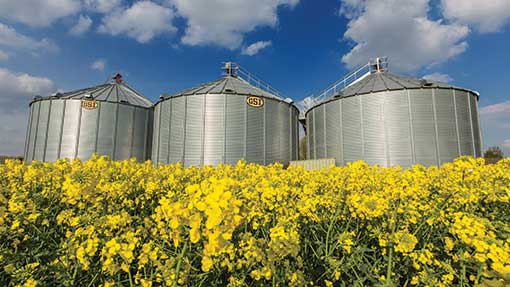 Pre-harvest grain store preparation is more important than ever this season following a mild winter and what is set to be an early harvest.

Preparation now will prevent rejections, save money and ensure grain doesn’t have to be sold for harvest movement – enabling growers to attract the typically higher post-harvest price.

Correct preparation enables safe storage and will also prevent sources of contamination from storage fungi, insects, mites and pests, which all pose a threat once the grain is in store.

With the UK witnessing a more volatile climate and grain quality coming under more scrutiny, getting storage right from the start will be important, says NFU chief arable adviser Guy Gagen.

“There is a big emphasis on getting the store clean prior to harvest because you may not have the opportunity to cool the grain down as quickly as you hoped, and this is where problems with pests and fungi can become an issue.”

“We have Red Tractor assurance to help farmers demonstrate they have done everything possible to prevent contamination.

“It’s there to ensure best standards are applied across the industry, reducing problems later and ultimately helping their business.”

By combining different management strategies, growers will be able to maximise pest control and rely less on chemical pesticides, according to researcher Maureen Wakefield, from the Food and Environment Research Agency (FERA), who specialises in novel methods to control grain store pests.

“Cleaning alone will not eliminate all pests in empty stores, but it should be the starting point,” she says.

“Full control will require a mix of getting the target temperature and the moisture right and using pesticides where necessary.”

Primary storage pests can survive on grain residues from the previous harvest, according to Dr Wakefield, who says identifying what pests are on farm will be important for control.

The saw-toothed grain beetle (Oryzaephilus surinamensis) and the grain weevil (Sitophilus granarius) cause the main concerns for farmers, with the latter difficult to detect, as it develops inside the grain.

“The larvae hollow out the inside of the grain as it feeds, so it can often look as if there is very little damage until you take a closer look,” Dr Wakefield explains.

Saw-toothed grain beetles are easier to identify, and can often be found in little pockets together because they produce an aggregation pheromone which will attract other members of the species.

Dr Wakefield warns growers not to rely on pesticides to tackle these pests, with increasing cases of resistance being found in certain populations and a limited number of active ingredients remaining.

“It will be very important in the coming years to protect these active ingredients and look at resistance management on farm.

“Mites in particular have shown increasing resistance in some populations, which could lead to control failures. Once in store, mites can be a problem in the latter part of the winter,” she explains.

“If the pests have somewhere they can stay and something to feed on, they will not come out until the grain is actually in the shed and this is when infestations can occur.”

Growers need to be vigilant as ambient temperatures are warming up, encouraging surface-crawling insect activity, Mr Clayton-Bailey warns. Even if growers have managed to get their grain store below 10C this winter, they will still need to be on the lookout for pests, he explains.

Once the store has been thoroughly cleaned, growers should monitor for insect activity using floor traps or PC traps. These should be positioned at floor and wall junctions every 5m around the store and checked weekly.

“If stored products insects (SPIs) or mites are found, place additional traps to pinpoint the source of infestation and use additional cleaning methods to try to eliminate the source,” says Mr Clayton-Bailey.

Ken Black of Bayer CropScience agrees that an integrated approach is needed in order to reduce the reliance on pesticides. But if insect activity is found, he recommends the pyrethroid-based fabric treatment K-Obiol EC25 (deltamethrin).

“This provides protection for up to two months against the problem insects and can be applied using spraying equipment. If you do a treatment ahead of harvest there is minimal cost. If you get insects in your grain and they reproduce and become an infestation, the cost of treating it rises significantly.

“If there is an insect problem in store now, this should be applied sooner rather than later to reduce the risk of infestation getting out of control.”

Once the store is cleaned, growers also have the option of a smoke-based insecticide, which can be useful to target areas that are difficult to reach, according to Syngenta technical information officer Ian Stott.

“Actellic Smoke Generator 20 can be used on its own or following the use of an approved insecticide to treat the store fabric, and ideally the temperature should be above 20C.

“Place the smoke generator on the floor, ignite and leave in a sealed store for 24 hours. This will target all the main insects as well as mites, which some of the fabric pesticides don’t.”

Mr Stott recommends one generator per 570/m3 of store. Following the 24-hour period, sheds should be well ventilated for at least an hour before re-entry, he says.

There are two treatment options for using the liquid insecticide Actellic 50EC (pirimiphos) at 8ml/t. This can be done by treating all the grain as it enters the store using specialist automatic equipment or a surface treatment.

To employ the latter method, growers should aim to treat the surface layer of the grain bulk to a depth of at least 30-100cm. This can be done by first part-filling the store and leveling the bulk of untreated grain. Treat the remaining grain as it enters the store, distributing it evenly over the bulk to create a treated layer.

With a limited number of treatments encompassing pest and mite control, growers should consider a non-chemical treatment in the form of Silico-Sec, says Stewart Woodhead, technical manager at Interfarm.

This biophysical product can be used to control pests and mites in both oilseed rape and cereals. Consisting of highly-micronised specific amorphous silica (silicon dioxide), Silico-Sec abrades and damages the cuticles of insects and mites, removing the water-proofing waxes, resulting in desiccation and death of the pests.

“Importantly, the abrading mechanism of action means there is no resistance issues and all pest and mites are controlled,” explains Mr Woodhead.

Silico-Sec can be applied using a specialist Venturi Applicator up to four weeks before stores are filled. It is applied as a dry dust at a rate of 10g/sq m over the entire fabric of the store, including walls, floors, equipment, ventilation ducts, intake pits, elevators, rafters, corners and crevices.

Growers also have the option of getting in contractors to carry out the cleaning. Jim Farquharson, managing director at grain store cleaning and fumigation specialist B&W Feeds, says with grain being such a valuable asset, growers shouldn’t cut corners.

“You can quickly see good-quality milling wheat go to feed wheat because of poor storage and then you are losing hundreds of thousands.

“The cheapest control method, though, is time. Treat it early, then the insect is picking up the full dose of insecticide,” says Mr Farquharson.

The company uses a trained and licensed team and employs a two-stage process for preparing the store. First a high-pressure spray applicator is used to apply an even spray of insecticide to all surfaces. This is followed up with a thermal fogging to get into inaccessible spaces.

Careful management will also be required once the grain is in the shed. Growers should start planning now to prevent some of the most common storage issues, says Philip Darke, managing director of Camgrain, which stores more than 450,000t of grain each year.

The main fungus with the potential to cause problems in sorted grain in the UK is Penicillium verucosum. Under the right conditions of 18% moisture content (MC) and above this can produce the mycotoxin orchratoxin A (OTA), so it is important that the grain is dried very quickly if it comes in wet.

“Once the grain is harvested, growers need to reduce the crop temperature as soon as possible, monitoring ventilation carefully. This should not take place with the wrong ambient temperature, which could potentially reheat the bulk, posing a threat to the grain.”

EU regulations set permissible levels of OTA at 5ppb for cereal intake and where grain is stored above 18% MC, these levels can be exceeded in two weeks if the temperature is sufficiently high.

Careful monitoring of potential ergot contamination will also be needed, particularly with so many blackgrass issues on heavy land. Mr Darke advises segregating bulks with ergot for potential colour sorting.

Colin McGregor contract manages a number of farms in the Scottish borders spanning more than 3,000ha. Grain storage is vital on his tightly-run units, with a large majority of it stored over the winter through until June.

A tight turnaround from grain leaving the store and grain going into it means the cleaning operation commences as soon as possible once the sheds are empty. “It’s often an underestimated job and probably last on most people’s wishlist, but it is an important one to do.”

Mr McGregor and his team set aside at least a week to clean the main storage on his home farm, which consists of two stores with a total capacity of 8,000t. “We try to be as thorough as possible, using industrial vacuums and cherrypickers to clean the whole of the shed from top to bottom. It’s no use cleaning part of it and leaving areas that can cause problems later down the line.”

Ensuring there is no residue for the insects is vital, says Mr McGregor. It is all about reducing the threat by reducing the habitat, he adds. “We tend to stay away from using equipment such as air compressors because you are just blowing the dust around.”

Stores are then monitored for insect activity using floor traps. If detected, Mr McGregor treats insects with a fabric treatment. Pests such as rodents are controlled year round using rat bait, and storage units are also monitored for any wear and tear to reduce the chance of them being able to penetrate the store.

“Everything in the store is then serviced prior to harvest so that we know it is working and we are fully prepared. Once this is done we have an induction with our harvest staff and ensure everybody is up to date on health and safety.”