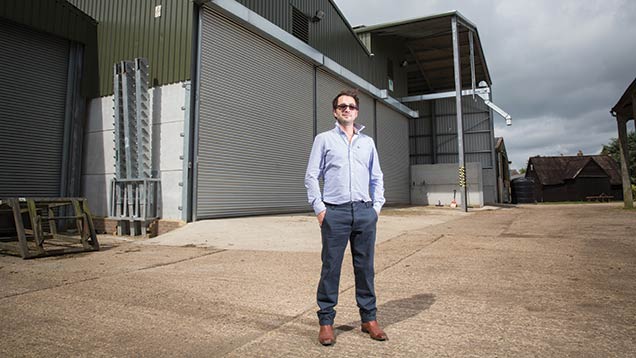 Tom Catton in front of the new store. © Tim Scrivener

Bigger tonnages of wheat, oilseed rape and winter beans being harvested at Catton Farms meant there was a clear need for an effective upgrade of the 50-year-old drying and storage facilities.

“We had a 7t intake pit, 10t/hour conveyors and cold air fan drying, which made getting crop into store slow and laborious,” says Tom Catton, who farms a 300ha all-arable enterprise at Harpenden, Hertfordshire, in partnership with his father Ralph.

“Having almost doubled the land we farm in recent years, there was an urgent need for more storage capacity and a more efficient system for getting crop into store.”

Traditionally, the farm grew many varieties of cereals for the seed market, requiring the storage separation provided by the installation of 12 silos. But with a move away from seed production to a rotation concentrating on feed wheats, oilseed rape and winter beans, it was felt a different system of storage was needed.

But any new bulk store and drying facilities would have to fit into the footprint of the silo store and a Dutch barn, which were both demolished, and within the confines of existing buildings to keep operations concentrated in the same location.

“Given the space available, and the fact we didn’t like the idea of equipment standing exposed to the elements, we decided to have the drying plant indoors,” says Mr Catton.

“There’s a dust house at the far end, where a cyclone separates dust and debris removed by the pre-cleaner, keeping all dust extraction enclosed and sealed, and a 20ft canopy at the front protecting the intake pit and wet grain holding area from the worst of the weather.”

Trailers ferrying crop from field to store now tip into a below-ground pit holding 18t of grain, with concrete walls providing another 70t of holding capacity when needed. A 55t ventilated wet grain bin supplements this capacity for maximum flexibility.

“This gives us enough capacity to stockpile grain while the drier goes through its recirculation phase should our two harvesting contractors, who both operate large combines, be working on the farm at the same time,” explains Mr Catton. “It also means we can take 30t from an artic in one go should we get into commercial drying in future.”

This was a key consideration in drawing up plans with Kettering-based project management and specialist grain equipment supplier Concept Grain Systems. It also influenced the layout of the 60t/hour handling system, which includes an outloading conveyor, all manufactured by Perry of Oakley at the company’s Dunkeswell Airfield factory in Devon.

A Perry C960 curved conveyor provides initial lift out of the pit to discharge into an AC60 aspirator pre-cleaner located below ground level in an extension of the pit excavation along with a 440/60 double-leg belt and bucket elevator, from which grain can be channelled to the drier, wet bin or straight into store.

“Originally, we filled the store from a single chain and flight conveyor mounted centrally across the three bunkers and then pushed up grain as necessary,” says Mr Catton.

“But that didn’t completely fill the bunkers and was too labour-intensive, so for last year’s harvest we moved the conveyor to the back of the building, where it now feeds three belt conveyors, each filling one bunker.

“This means we can now not only fill right to the top of the walls and door barriers without pushing up, but we have the added flexibility of being able to discharge into a bunker wherever we want using remote-controlled trippers,” Mr Catton adds. “If necessary, we could divide a bunker and still put crop behind the division, as well as in front of it.”

Drying capacity has increased to a nominal 29t/hour – which should allow for further expansion in future – with the installation of a Perry M507 continuous mixed flow drier, constructed from galvanised components throughout.

The side-mounted fans are fitted with dust shutters to minimise the amount of debris that leaves the drier when it discharges, and a ledge-free grain column design aims to minimise accumulations of dust and straw.

Sight glasses in the exhaust plenum allow for dust and chaff build-up to be monitored and large doors provide access for clearing any blockages if they occur in the baffles above the discharge shutters.

Operators can use the grippy dimpled surfaces of the internal structure as a ladder to reach upper portions of the drier and use the safety harness connection points for cleaning and inspection.

Height constraints called for an integral hopper to carry away dried grain released via the air-operated discharge shutters, which are adjustable for opening frequency and duration using the 12in touch-screen PLC control panel that sets up and monitors all drier functions.

The grain handling, drying and storage facilities now available to the family team at Catton Farms are nothing short of transformational.

“We can take in grain and other crops much faster and with less hassle, and get them dried if necessary more efficiently,” Mr Catton points out. “We’ve also gone from having 500t of mostly bin storage and a 600t floor store to more than 2,000t of easily accessible and more flexible floor storage.

“We are now better placed to manage the storage and marketing of our crops, and to explore commercial drying as a service to other local farms,” he adds.