An illegal immigrant from Afghanistan has been found hiding in the seed hopper of one Amazone’s drills at the Cereals Event 2007 in Cambridgeshire.

Amazone staff who were working on set up day were surprised as they lifted the machine’s hopper cover to find a man cowering in the bottom of the tank. 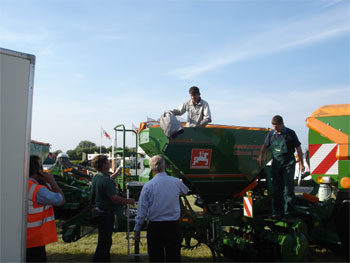 He made a number of attempts to escape while the team called the police.

Unfortunately Cambridgeshire Constabulary were unable to provide any officers to detain the immigrant and instructed Amazone staff to let the man go.

Cautious security guards then extracted the Afghan from the machine and escorted him from the site but not before he had the chance to leave an unpleasant surprise in the base of the hopper.